With just over a week passed since my 5 Star assessment on Anglesey I was off on the road again & heading to Pembrokeshire to work on my navigation & sit another assessment. I wasn't a total moment of madness as the points brought up by Nick in the last assessment should be reasonably easy to rectify with some practice. I would however have preferred a bit more time to practice. 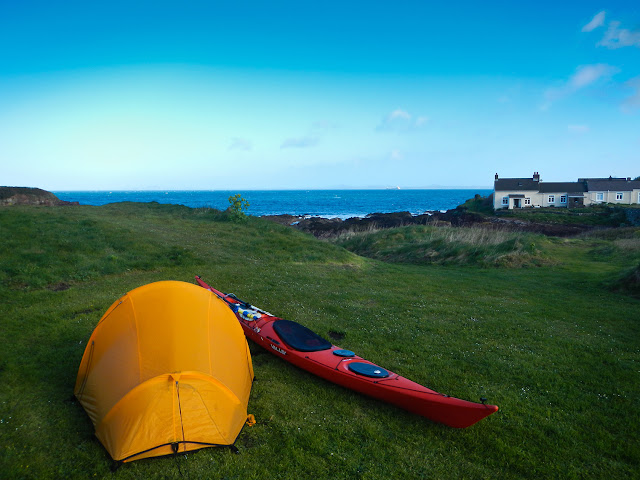 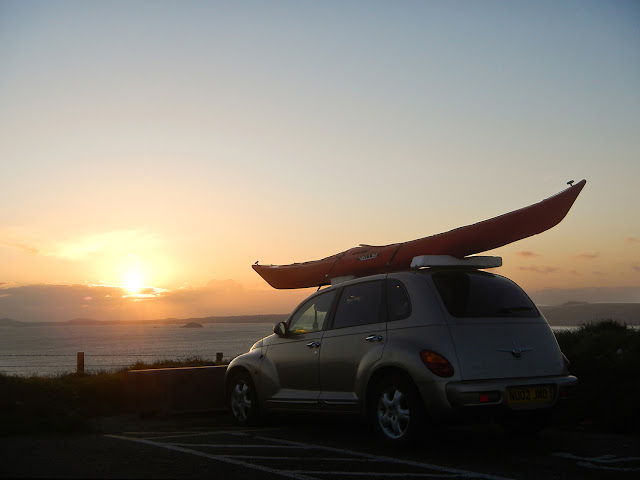 Another, not strictly legal camp spot :S
I seriously hate paying to lie on a patch of grass :\ 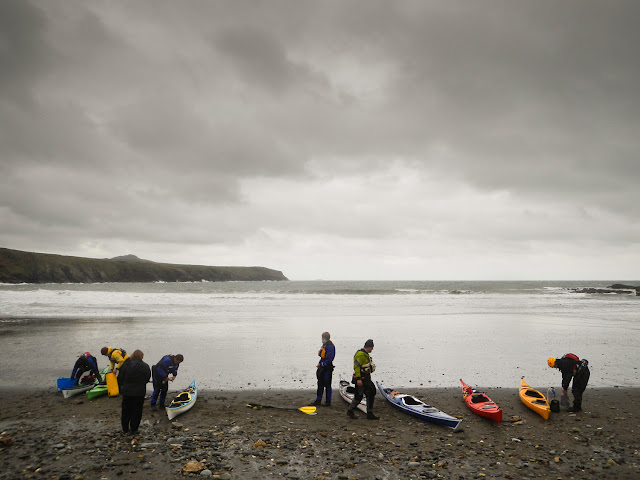 Day one of the assessment & it was at Abereidy that we were heading out from with the intention of reaching Porth Clais. There was a North to North Westerly wind & the conditions were pretty rough on the water, hence no pictures.
Despite the conditions we were all pretty comfortable paddling & enjoying ourselves.
however, one of the Guinea Pigs was struggling a bit with the conditions & had capsized a few times which were quickly sorted out. After one capsize it was decided that he should paddle into Gesail-Fawr, the last get out before St Davids Head, he was doing great considering he had a boatful of water but unfortunately he capsized again just before Penllechwen & got swept past that headland minus his boat. Just prior to this I was told to tow his boat onto the beach which I did. This left the swimmer, assessor & the other 5 star applicant heading around St Davids Head whilst myself, two other Guinea Pigs & the Assessors assistant landing on the beach.It wasn't an easy landing & the Assessors assistant quite badly smashed the front of his boat in the landing. the problem we had once ashore was an inability to communicate on the pre arranged channel due to the enclosed location & it was about 45 minutes before we were able to reach the coast guard. In the back of our minds was whether the other group were trying to contact the coast guard & not being successful either.We had a few options available but decided to take the offer of a lift from the coastguard leaving the swimmers boat above the tideline. It certainly wasn't an easy launch from the beach to reach the coastguard & I'm glad I wasn't last.We were told that the other group had made it around St Davids Head with the swimmer on the front deck of one of the boats, pretty impressive! & a relief too.Once back at Whitesands we all got back in our boats & paddled to shore reflecting on what had happened & how we all dealt with the situation. Hindsight is great in these situations & I will always learn a lot from them.To be honest, all though this was a very real incident, the Coast Guard were called as a precaution as we were unable to contact the other group & establish what was happening with them. We just weren't expecting two boats & A chopper to be launched, guess the Coast Guard were playing it safe too.

Everyone coped really well, especially the two guinea pigs on the beach who were invaluable on the day & I could learn a lot from them & as always the Coast Guard were fantastic :)
a few hours rest & some chart work & we were getting ready for the night Nav :S 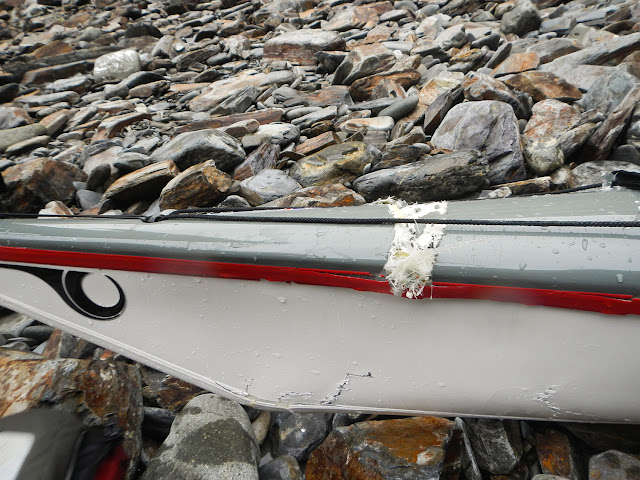 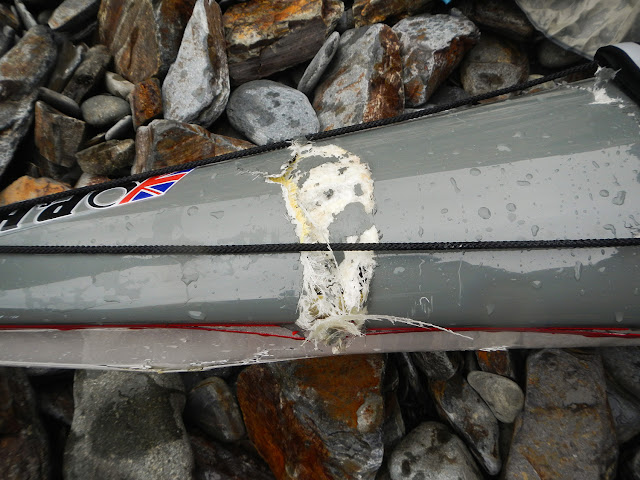 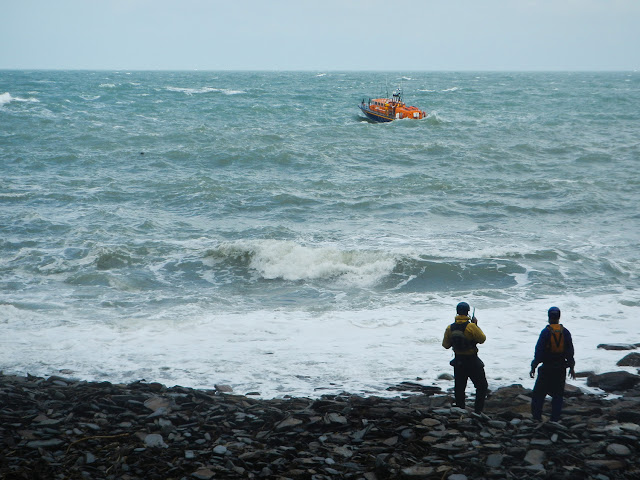 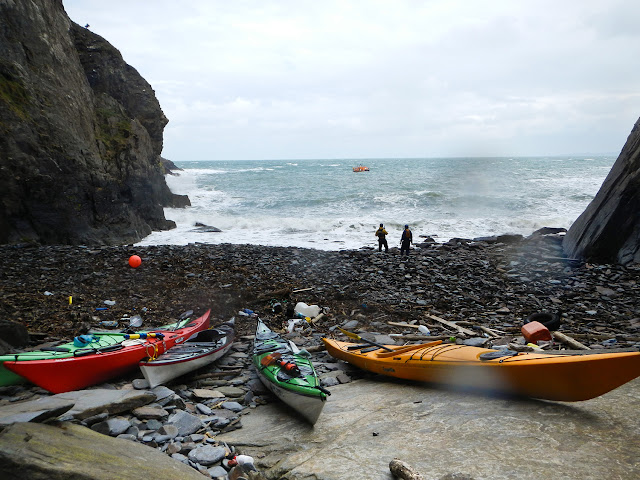 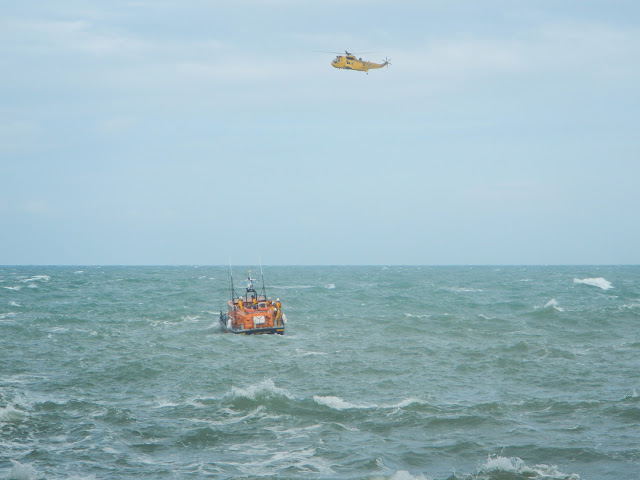 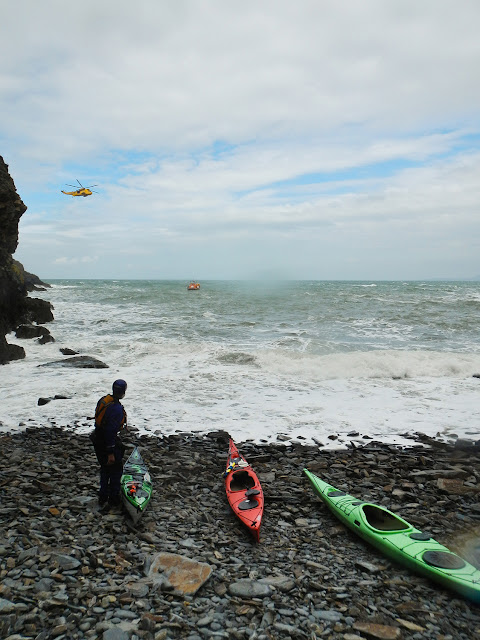 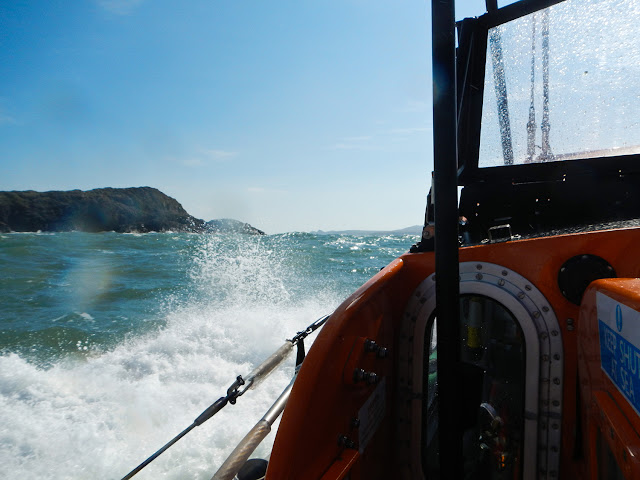 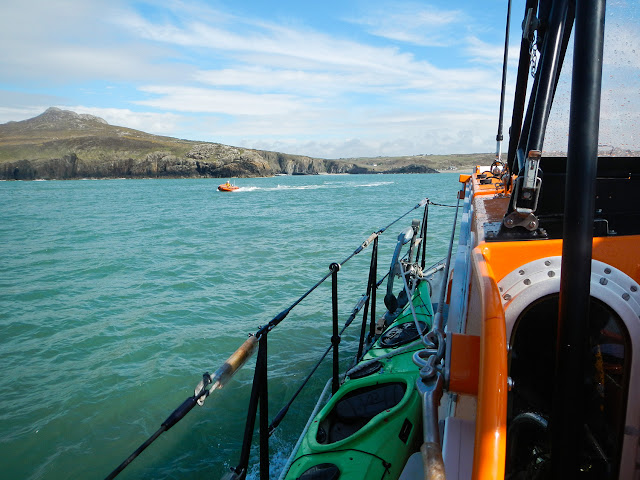 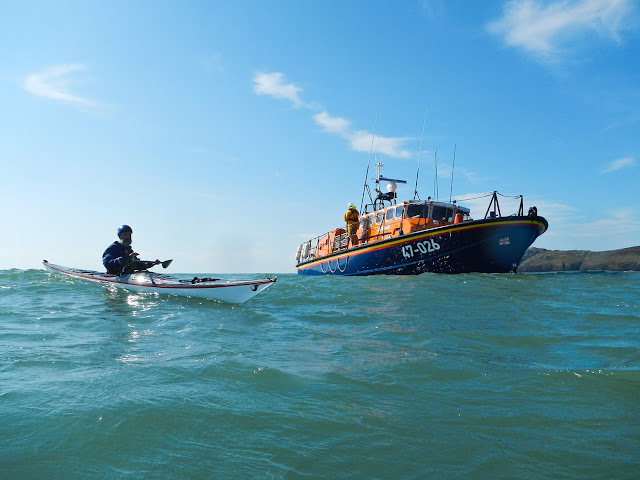 Day Two & it was from Porth Clais that we launched, same as the night nav (that I thought went well) from the previous night.
Today we were heading into Ramsey Sound & I was feeling very focussed on my navigation, following our position evan when I was not in the lead & really enjoying the nav part too. 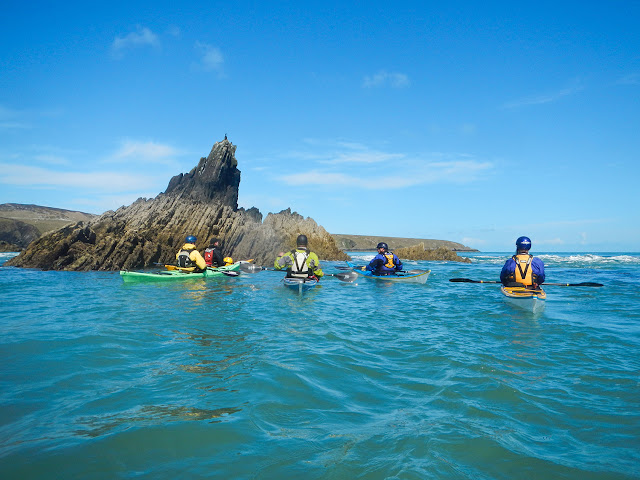 We all worked on some skills at the bitches, they weren't huge but there was certainly some flow to play with. 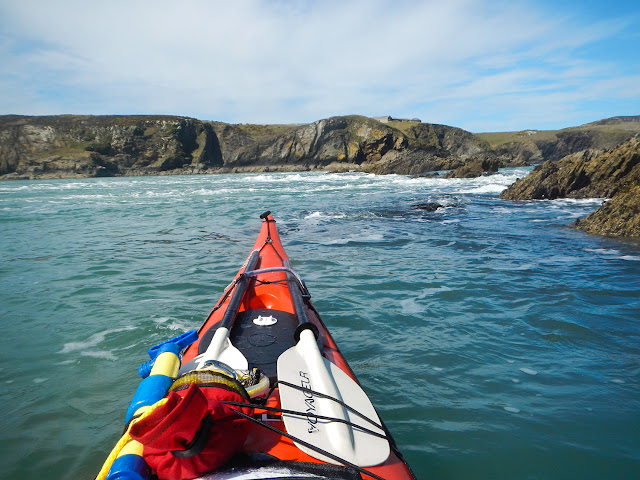 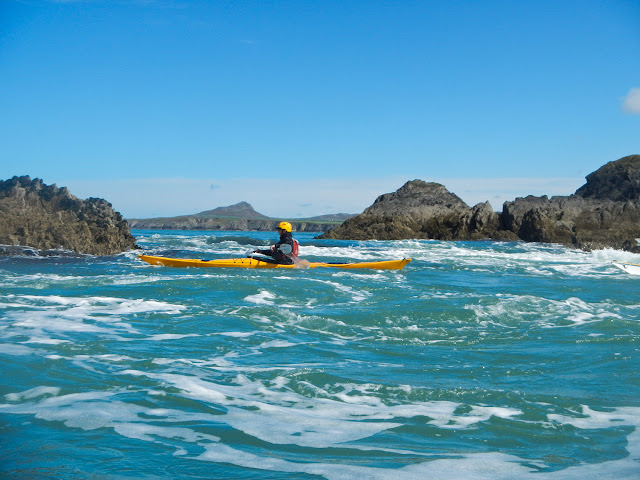 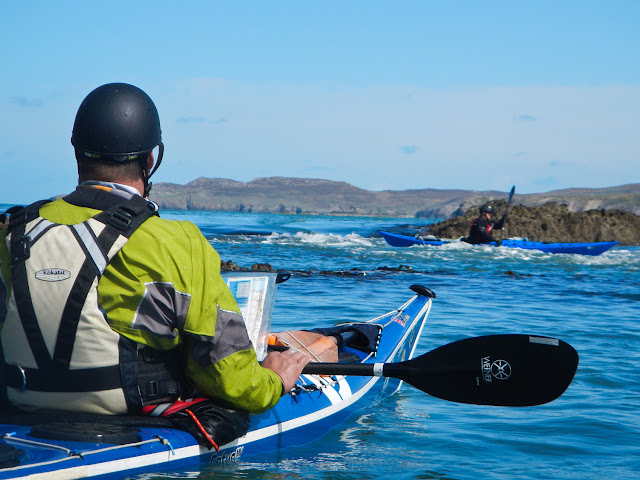 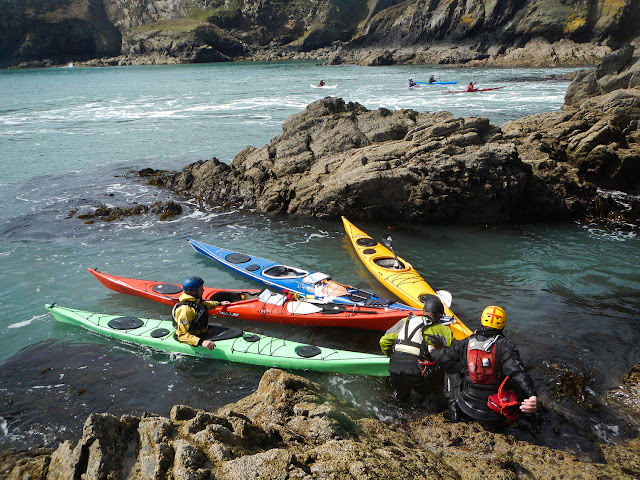 We stopp for a quick break on one of the Bitches.
I didn't bother taking any more pics as it just wasn't a priority for the day, I was busy trying to keep it together. We had a few more challenges thrown in on the way back though it gradually chilled into a gentle paddle, think we were all knackered?
I havent mentioned who I did my assessment with as I got the impression they wanted to keep the rescue thing quiet as people post their own opinions & make the incident sound like something that it wasn't. It was a real incident, yes, but it was kept under control.

So did I pass? Unfortunately not :( There were some points brought to my attention from the night nav, leadership, equipment issues & lack of weather forecasting ability.
I think the leaderships points were harsh as I was focussing hard on my navigation (speed, time & distance) & never once put the group in danger. I'd expect an experienced assessor to understand & make allowances for this though I appreciate the comments as I'll try to broaden my focus during the next assessment.

I'm looking forward to receiving the breakdown of points that I need to work on & have already ordered a book to help learn weather forecasting. I am going to crack this, I've learned loads in the past few weeks & know that I can definitely sort the areas that need polishing.
Posted by Taran Tyla at 21:41