Ok then, lets see? A stupid 'O' clock rise, on the water for 06:00 At Sully & heading on a bearing of due South for an hour & a half to complete the first stage of todays trip, It could only mean England was calling.

I was paddling with Noel again today. It was only a couple of weeks ago I took him to Flat Holm for his first visit & today I was really gonna make the bugger work :D

We were slightly late leaving the tip of Sully Island 10 minutes late 06:10, I can live with that.

The tides are on springs & really ripping today & we were on a due South bearing from the vector I'd worked out last night. You can see the angle Noel is paddling to reach the island, I did say the tide was ripping!

I was a tad conservative with my bearing though & decided we should turn off bearing a bit as I could see the shape of the Island changing as we approached the West side. A little local knowledge helps as its a veiw I've seen plenty of times over the years. 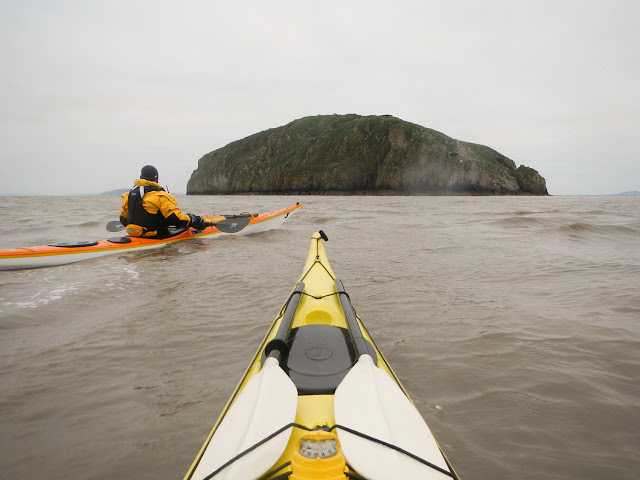 Another new Island for Noel, I reckon he's excited ;) 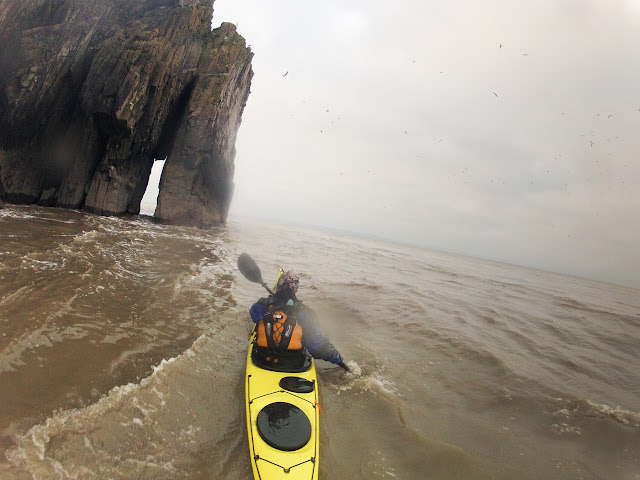 I cut a wee bit too close to the tip as I wanted to see if I could paddle through the Rudder (the Archway). I couldn't though as the tide was really ripping & now we had to push hard to get around to the South side. All good fun & not the first time i've done it. 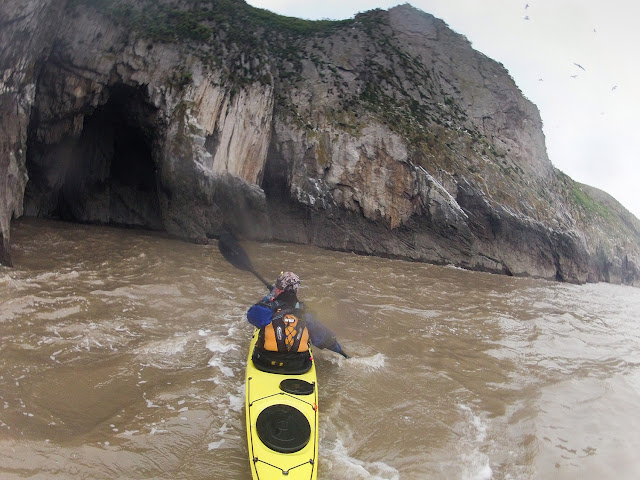 revisiting the South of Rudder Rock. 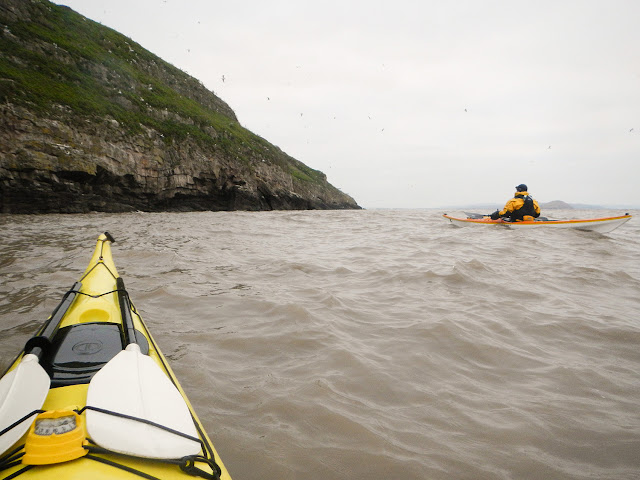 The Seagulls seem to be getting ready for summer. 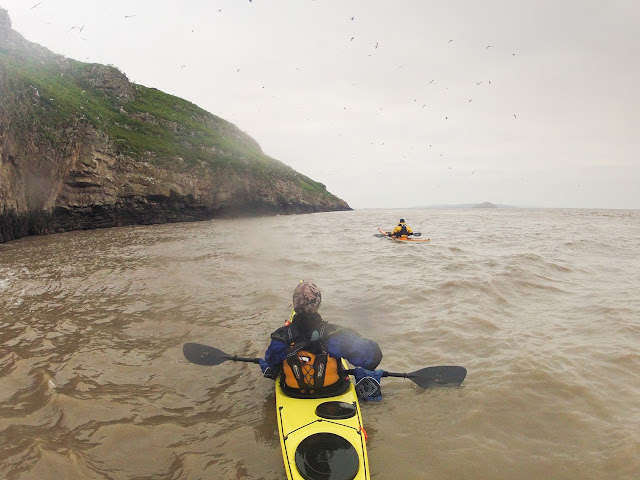 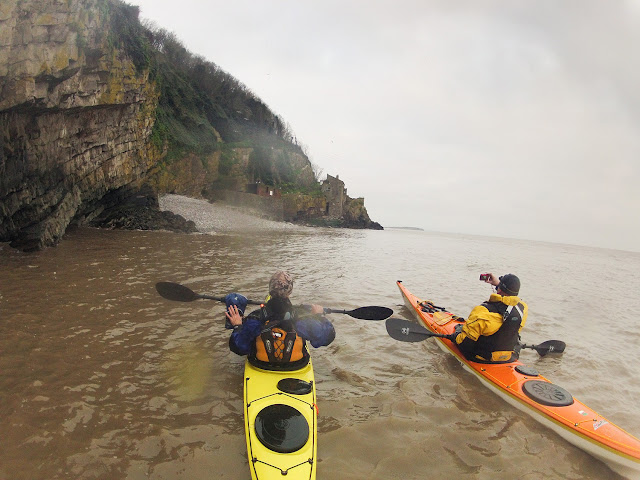 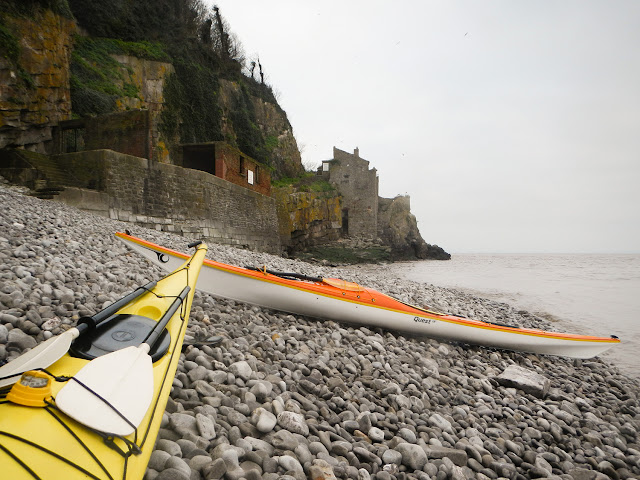 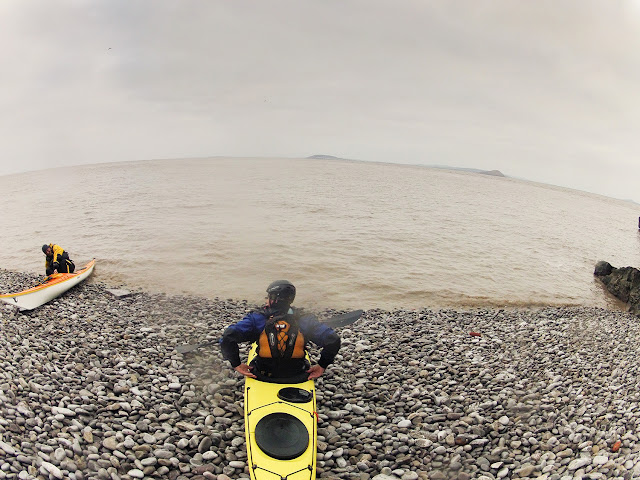 After a short break we were on our way again, we'll be returning here later. 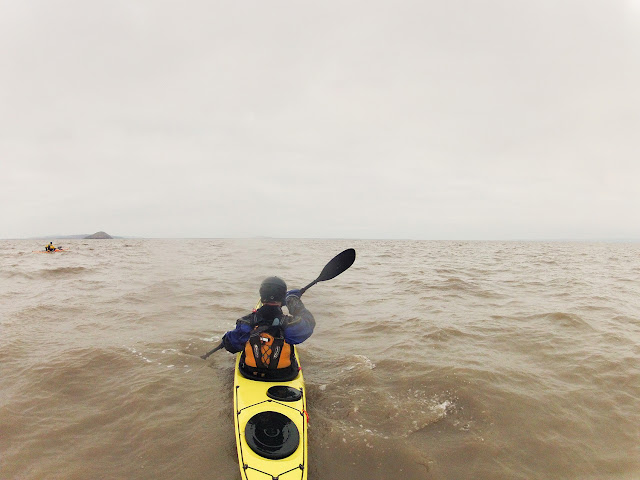 We're heading for that bump in the distance, Brean Down. I've only managed this trip once before & I'm really looking forward to going there again. 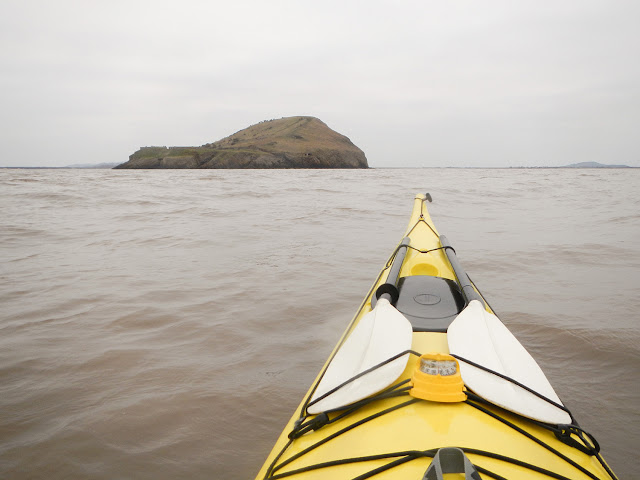 The surrounding land is so low thats its not far off being an Island. 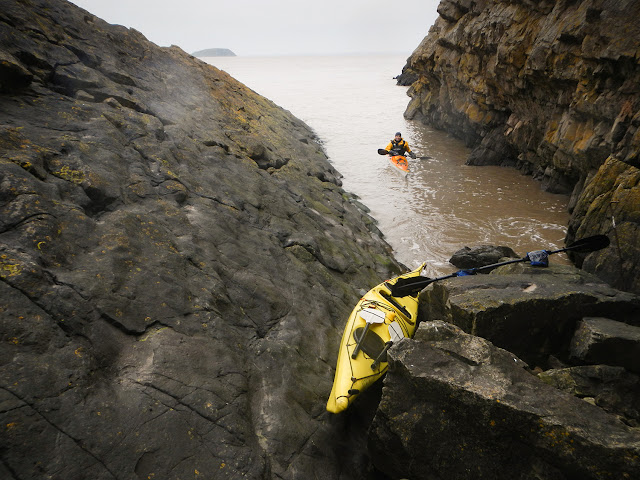 Theres no easy landing on the Down but I'm ok in a plastic boat & I need another pee. I'm keeping hydrated on this long paddle!
I also need to stop to do a vector for the return to Steep Holm. I'd done the two vectors required to get here last night but thats all as I like to be more dynamic in my planning & its good practice to do them under pressure. 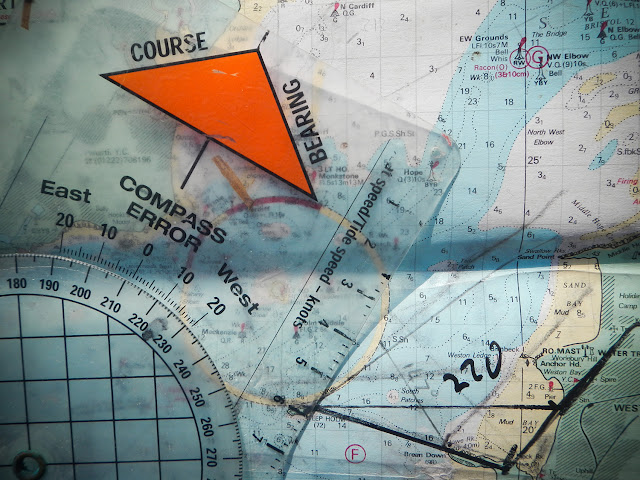 Its a 40 minute paddle so I worked it out for a whole hour as we were tiring & likely to take longer.

Back underway & I switched on my gps as I wanted to check the cross track error facility that gives instant vector bearing & it confirmed that my manual vector was spot on :) 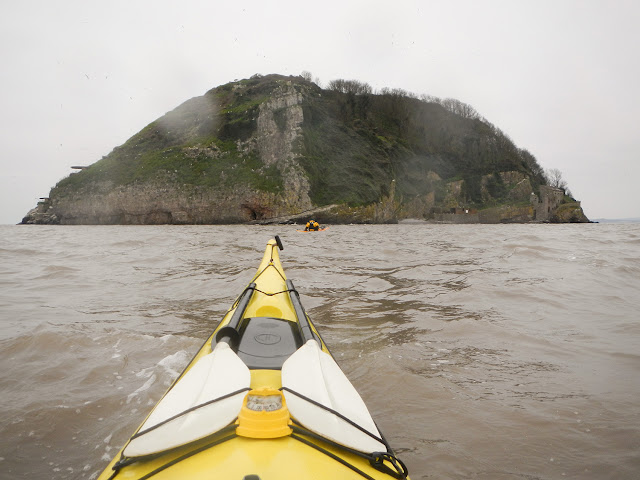 Back at Steep Holm & for a slightly longer break, hopefully though I'm aware we're a bit late & the tides due to soon turn. I'd like to leave immediately as I want to cross to Flat Holm on slack water as I know it'll take longer & become a slog if we have to start ferrying. We were both quite tired by now so we gave it about 10-15 minutes rest & looking forward to a longer break on Flat Holm.

the crossing went well up to the middle mark buoy. We were well on course but the tide really started to pick up & it became a real slog!
We were still holding course but our speed had dropped to 2.5-3 KPH, really not good, it would take ages & we were knackered. As we were on course for the Eastern side of the Island I made the call to go off bearing & let ourselves drift to the western side & to land there. This had the added advantage of our speed increasing to a healthy 5-6 KMH, much better. 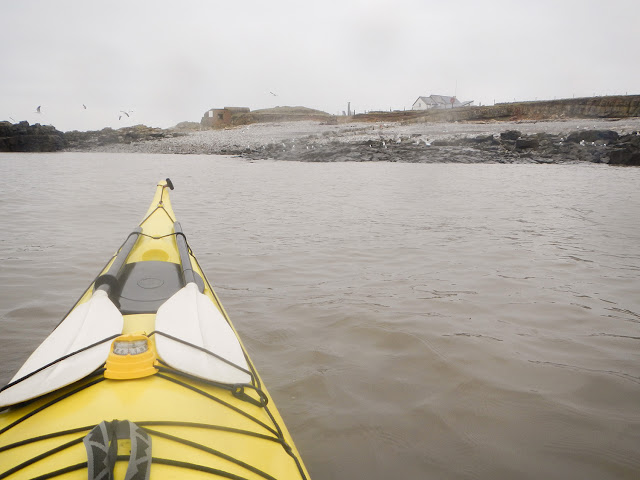 Land at last. we were approaching right by the wardens cottage. 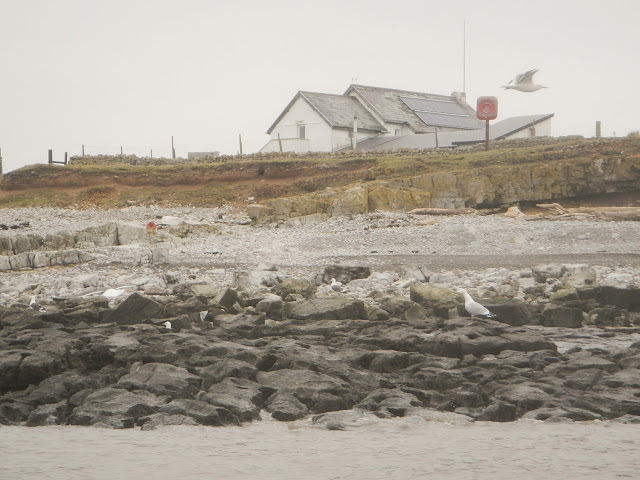 The Gulls were back here too.

Noel trying to look warm, not easy, It was freezing here!
We walked to Castle Rock to see what the tide was doing, it looked like a whitewater river. It was only an hour since the tide had turned but being on springs had given it some bite. We had two options to consider at this point, stay till about 15:00PM & paddle back on the last of the ebb or slog our way back to the mainland on a very steep ferry angle? 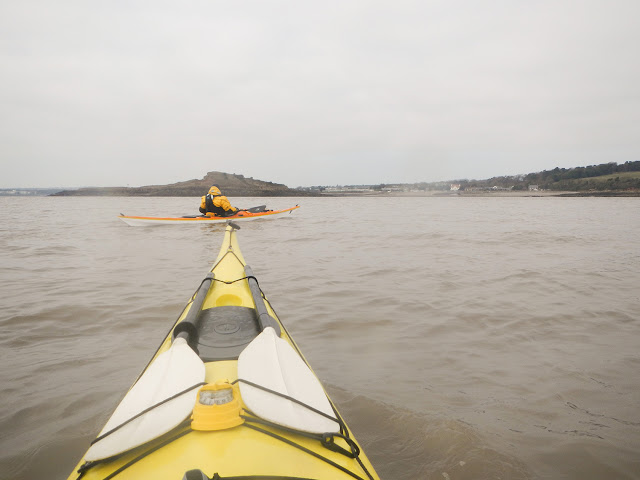 We went for the slog as 15 minutes on Flat holm had us both utterly frozen. To reach Sully we had to aim for Penarth Pier but the angle worked well & I knew from experience that Lavernock would provide some shelter from the currant as we got closer.
We were both pooped when we finally hit the beach & instantly froze as soon as we stopped. I'm missing Sardinia :( 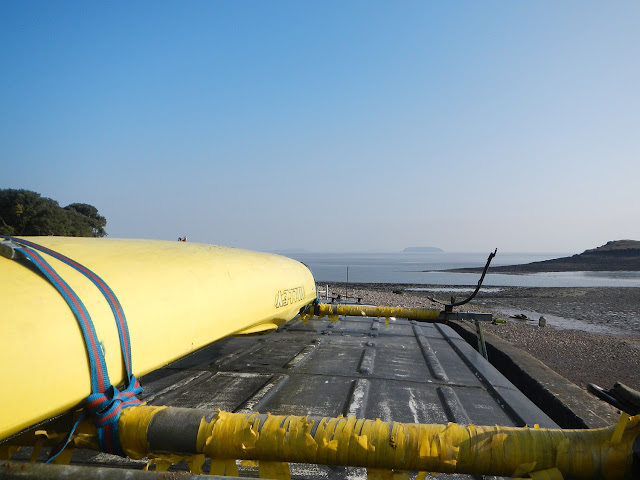 Then about an hour after we returned this happened, sodding typical.
It was an awesome adventure but after all that slogging I wonder if Noel will be busy next time I ask him out for a paddle? :D