5:00AM & my alarm raises me from my sleep & I rise excitedly as I'm looking forward to this trip, I'll be heading to Steep Holm in Darkness though it should be pretty light by the time I get there.
I've been practicing my tidal plans & vector diagrams for days now so that it becomes second nature to me, in readiness for my 5 star assessment. Trouble is that I've been doing the planning & vectors but not actually paddling them. After three months of paddling almost everyday working as a guide its fair to say my motivation is lacking a wee bit.
I'll be trying my new deck compass too so I'll leave the GPS switched off. I didn't rush getting ready, I thought I'd left plenty of time but at a casual glance at the time I noticed I was cutting it a bit fine, (whoops). In fact I was about 15 minutes late getting on the water & would have to get keep a good pace if I'm to leave Steep Holm just as the tide turns to make the 3 Nautical Mile crossing to Flat Holm. 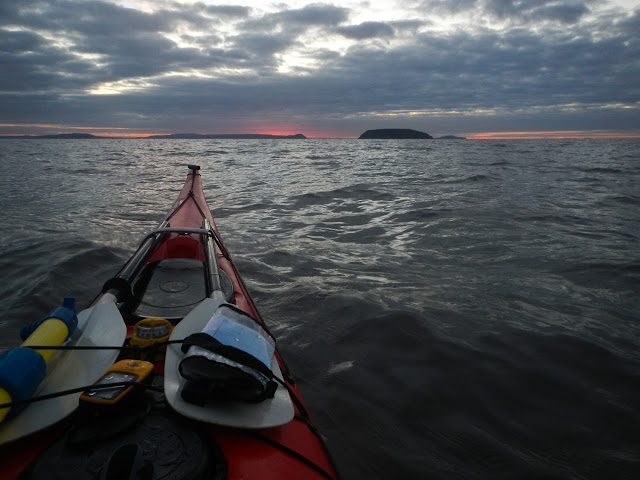 Behind me the full moon set the dappled clouds glowing & lit my way nicely during the darkest part of the trip. As the sun rose the horizon glowed like scrub fires held the hill alight. 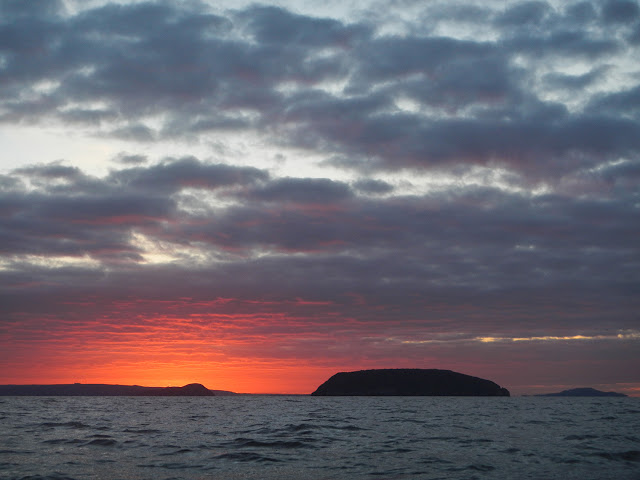 I held my focus as best I could during this wonderful show & tried to concentrate on my bearing. 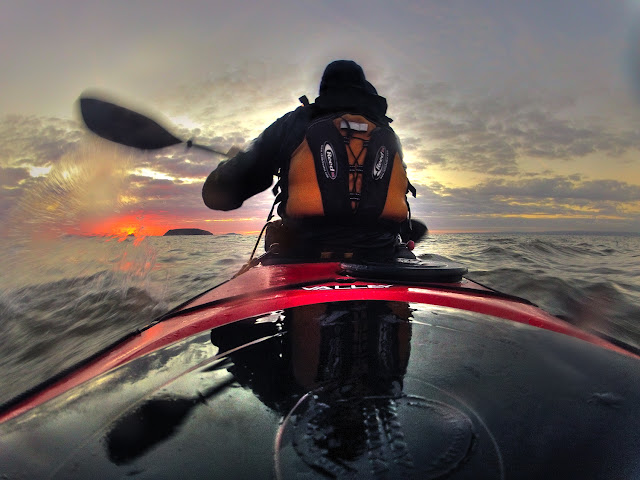 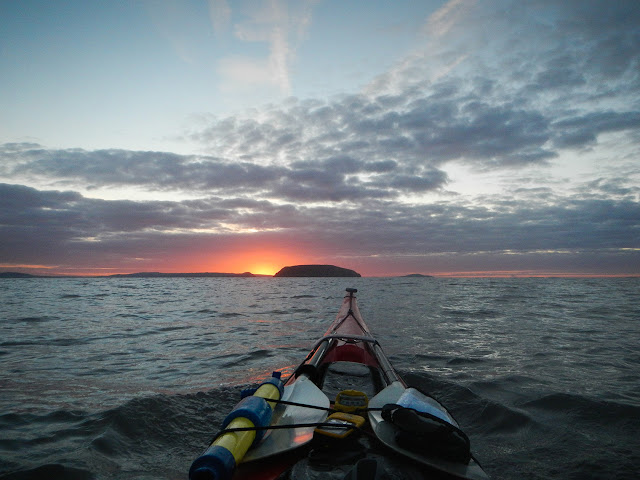 It getting on a bit time wise due to me being late. The original plan had no allowance for being behind schedule as that would mean getting up evan earlier, A plan B was needed so I turned for the East of the Island in the slackening tide as this would save me a good 10 minutes by not circumnavigating the Island from the West. 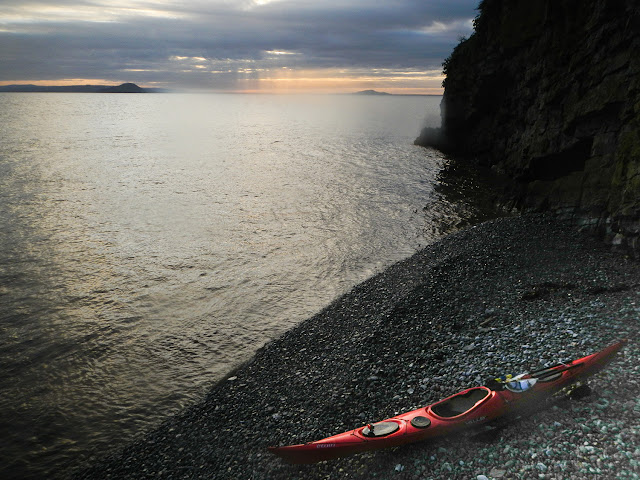 The last 15 minutes before landing were pretty tough, I was pushing hard to regain some time but the building following sea kept pushing me left & right as the waves caught the boat. I was sweating quite a bit when I landed. Good fitness training. 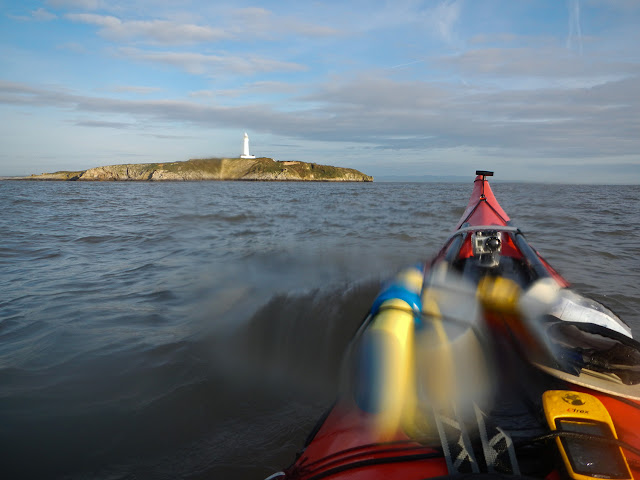 I didn't stop long on Steep Holm, 5 minutes tops as I needed to push on for Flat Holm before the tide really got going. I made good progress till the halfway buoy, ferrying very accurately but as I approached closer to the Island the tide gripped me more & more & I was noticeably losing ground.
Just 300 metres from the shore the tide really showed its hand, the race was kicking up some playful surfs & I was losing speed rapidly. With a 100 metres to go I was barely making 1KMH & really fighting to reach the Eastern side of Lighthouse point. I could have just took it easy & headed for the West of the Island letting the tide take me but I wanted to land on the Eastern Beach & was in a fighting mood.
I was breathing heavy & groaning as my tired arms fought for each metre. Occasional shouts of "Come On You Slag" to my kayak made little difference & it was clear I was going to loose the battle, but not the war!
I chose to let the tide push me past the wrong side of the headland as I knew that I could charge out of the eddy & push the short distance through the tide into the next bay. I lined myself up & went for it & I went from 1KMH to a heady 9.2KMH as I entered the back eddy of the sheltered bay. I could literally see the sea swirling.
Just one more headland to pass, Jackdaw Point & I'll make the East beach, I paddled into position & sat awestruck, it looked like the Menai Straight as the tide shot past me like a river. Hmmm, hope my arms got some oomph left.
I pulled into the flow & dug in hard hugging the cliff, if I drifted out I then I put my blade in the water & feathered the angle letting the flow pull me back over.
When I finally reached the shore I figured this should probably be a quick stop too, 10 minutes tops. Getting a good workout today :) 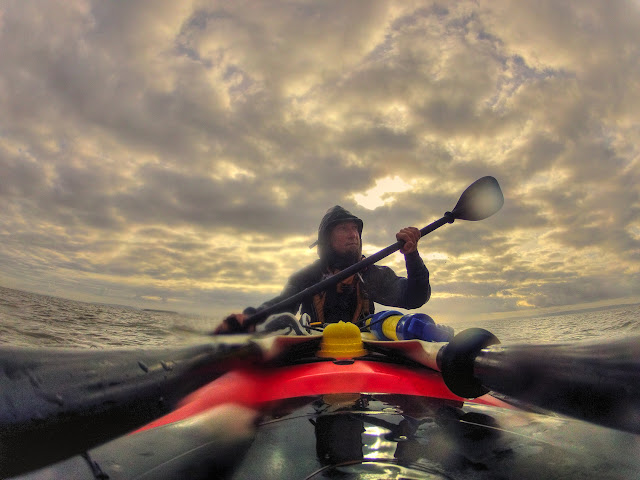 Leaving the Island the tide was really shifting now & the water level dropped about a foot through the gap at Castle Rock & was swirling all over the place, nice :)
To reach Sully in this flow I would have to aim almost to Penarth, effectively paddling very sideways. At least I was in no rush now, I just enjoyed, (as much as my tired body would let me) & got on with it.
I drifted just North of the Wolves but the bearing looked good & sure enough brought me to Sully with distance to spare. 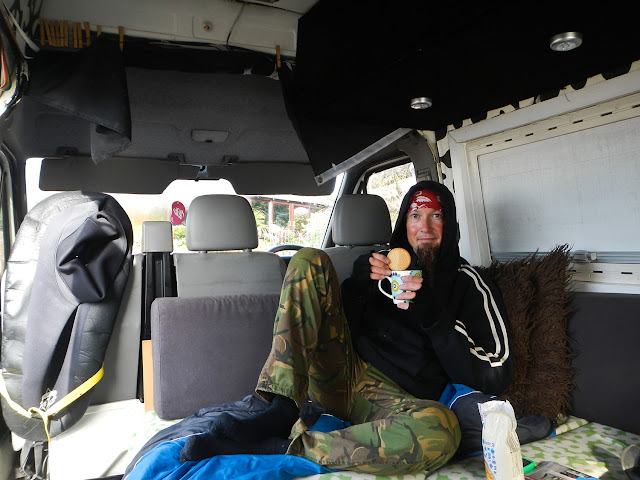 The thought of tea & biscuits really kept me going on the last stretch. Bliss! 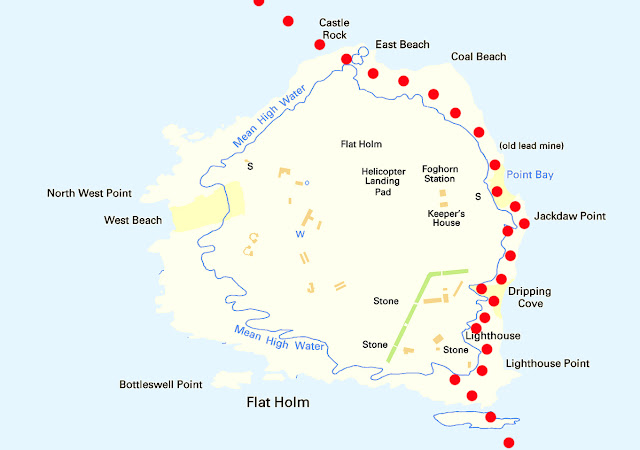 My Route Around Flat Holm... 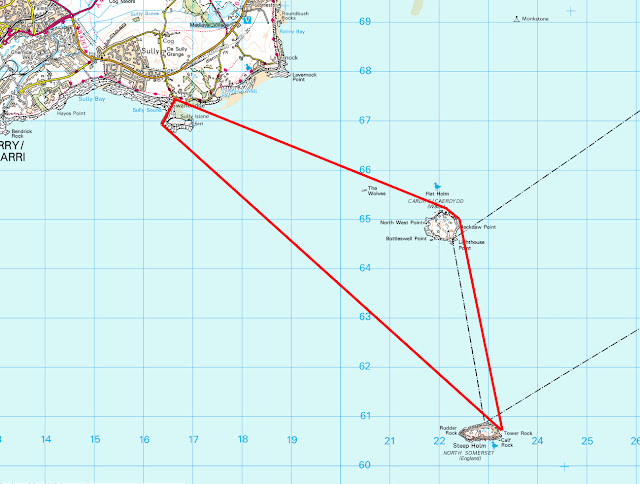 The Overall Route From Sully...