The Most Southern Hebrides...

On the 25th of June I arrived on the beautiful island of Barra with the intention of circumnavigating the Oute Hebrides. As it turned out the weather & sea condition s in some parts weren't to my liking so I just enjoyed the part of the paddle that I did do & enjoyed the camping too, I was here after all to just have fun & the islands aren't going anywhere. 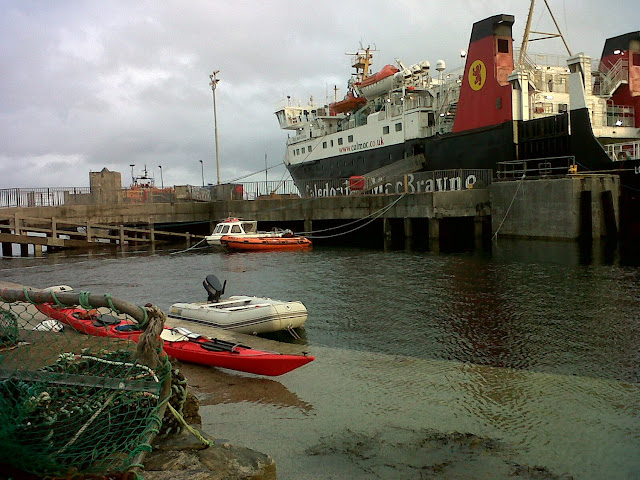 The ferry finally arrived in port at 21:00 & I was like a greyhound out of the blocks as I hit the water to see how far I could get before sundown. I had hoped to camp on Mingulay but that was looking unlikely.
For some reason when planning the trip I failed to check how long the ferry took & certainly wasn't expecting to be starting the paddle at 21:00. 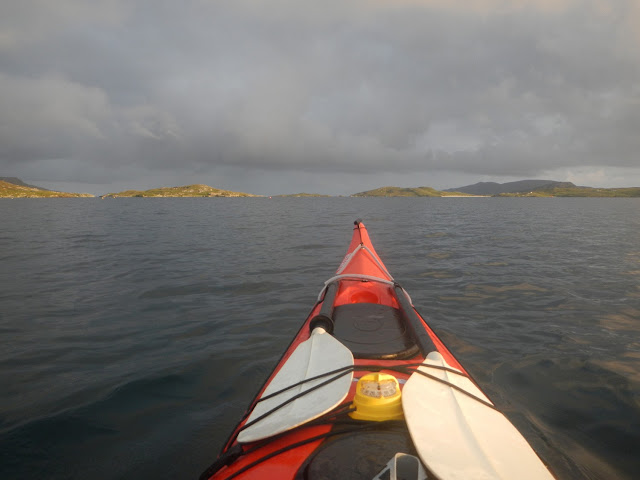 The sun was low as I head out from the port of Castlebay paddling South towards the solitude & adventure I was seeking. The Southern islands were looking like the most remote & committing part of the whole journey & I was looking forward to experiencing them but also getting them out of the way.

I was also a little nervous about the complex tides through the islands that would require some thought during the planning & also concerned about the lack of VHF signal should things go a little wrong.

I decided to head in on Sandray for my first nights camp. Looking at the maps I could see that although tomorrow would be a tough paddle it was at least do-able to get around the islands & back onto Barra. 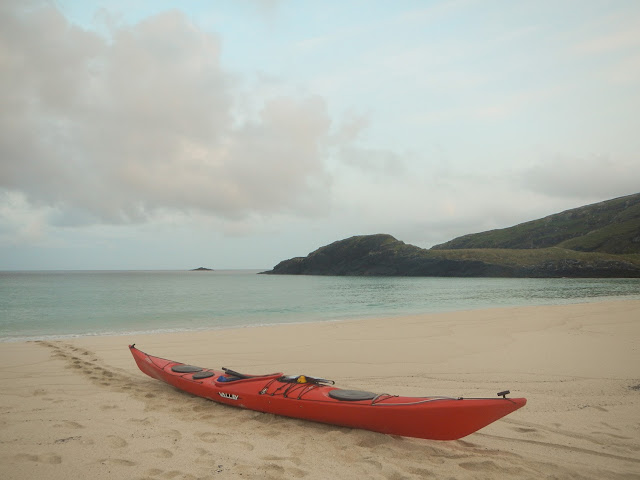 The beach on Sandray. I set my tent in a perfect grassy spot above the beach & dragged my boat above the tide line.
I've learnt from previous camping trips that fully laden boats suck weight wise so I had brought an Ikea bag for unloading at the waters edge & carry things in stages to the tent. It works very well & better I think than bringing a trolly. 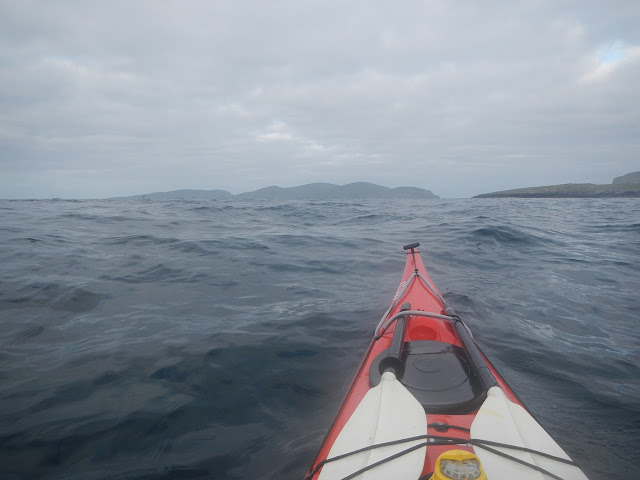 Day 2 & I was up at very stupid 'o' clock, on the water for 06:00 & full of excitement & anticipation. I was staying out wide to avoid the cross currents but also to catch the gentle tide running South as I headed towards Mingulay.
A big highlight for me on this part of the trip was an Arctic Skua that kept circling me & hovering just a few feet from my head looking down. awesome!
I was seeing lots of Puffins & Storm Petrels too. 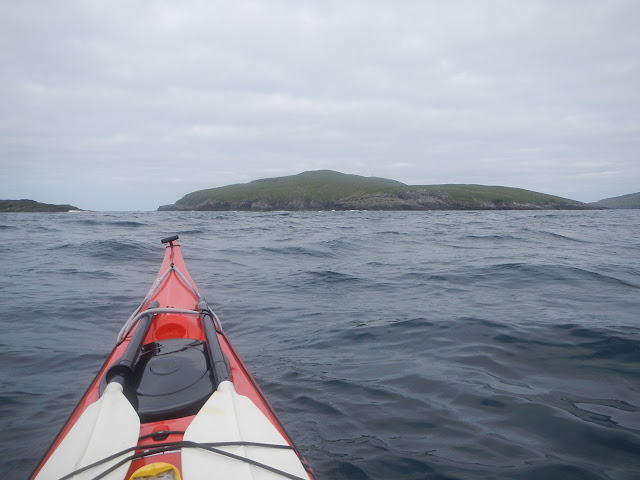 And then onto Bernaray the most Southerly Island. Things were getting exciting now & I played in the water betweeen the rock on the left that clearly had a little tide running through :)
The South Western side of Bernaray was where the nice calm water left me & things were getting tense. There was big swells running in here & creating clapotic waves as they hit the vertical faces of the cliffs creating a very messy sea. I was bobbing around like a cork.
The South Western side of Mingulay was no different either & I was considering my options. I could paddle back through the sound between the islands to set camp or rest until the conditions improve or I could just continue & stay on the Western side. I evan considered paddling back along the Eastsern side but that would seem like failure & wasn't really an option.
In the end my stubbornness won over & I continued up the Western side towards Vatersay.
It was a tough decision to make not just because of the conditions but also the tiredness from the early rise that I was feeling. 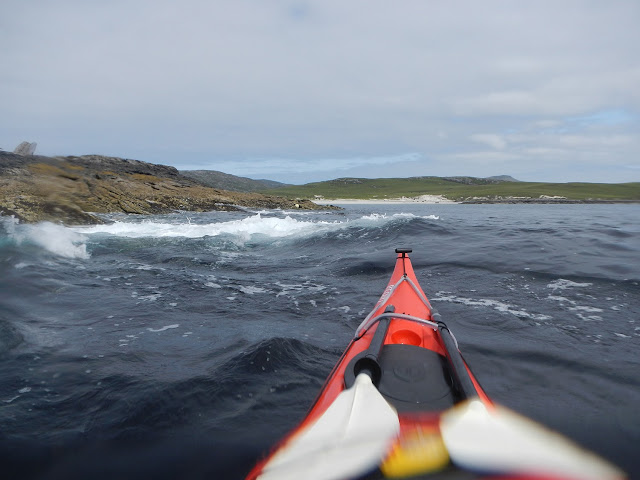 Approaching the beach at Vatersay & very tired by now, I had been in the boat for a little over six hours at this stage & was keen to stretch my legs & refuel my body.
Break time & much needed too, I made a super strong & sugary coffee & some porridge too to get my body back on form.
I wasn't planning on camping here despite being idyllic, I still had some more miles left in me, after a break at least. 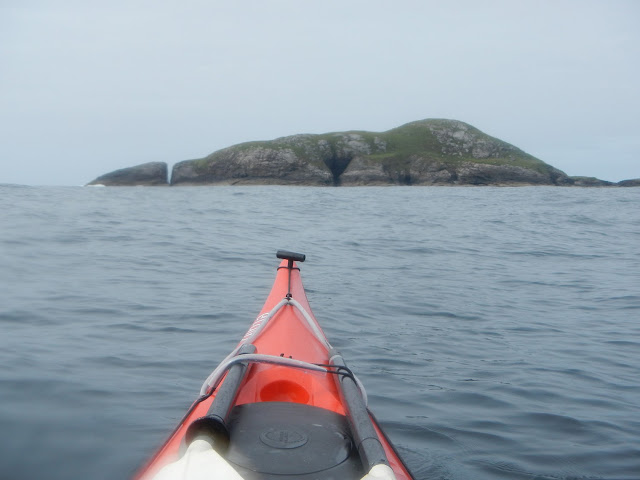 A good three hours or so later & a sleep too saw me back underway & imagining I was seeing sleeping dinosaurs in the rock formations. 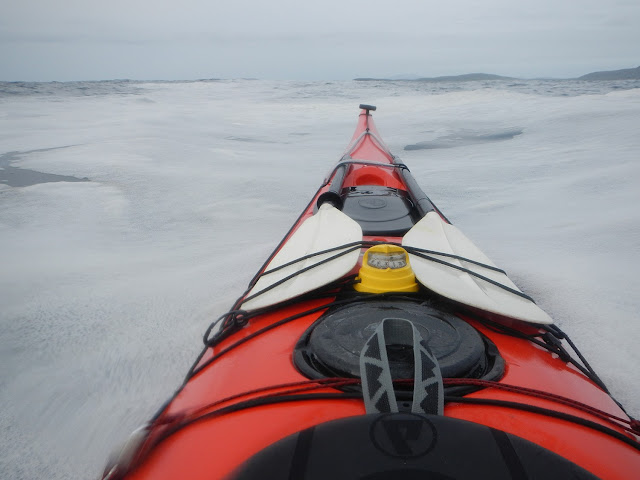 Back on the Western side of Barra & the swells were back creating more clapotis & foam too. It was another exposed section of coastline but very beautiful too :) 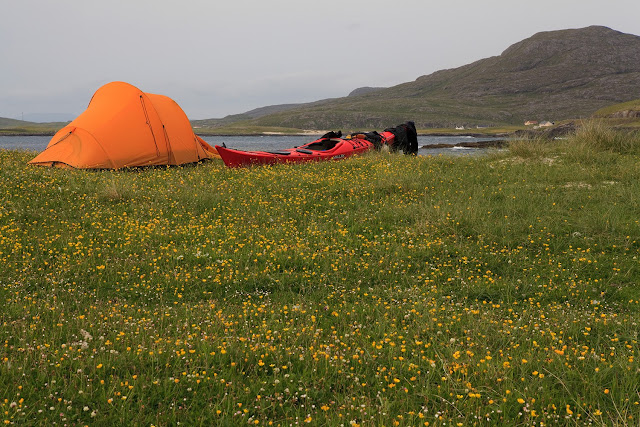 I set camp for the night in Bahh Halaman & was glad to have Loch Na Doirlinn so close as I could bathe in the freshwater & wash my paddling kit.
I was reasonably early setting camp, about 18:00 hours but this was due mostly to the very early start to the day. I fully intended to chill & get my energy back for the coming day despite the calmer looking evening weather. 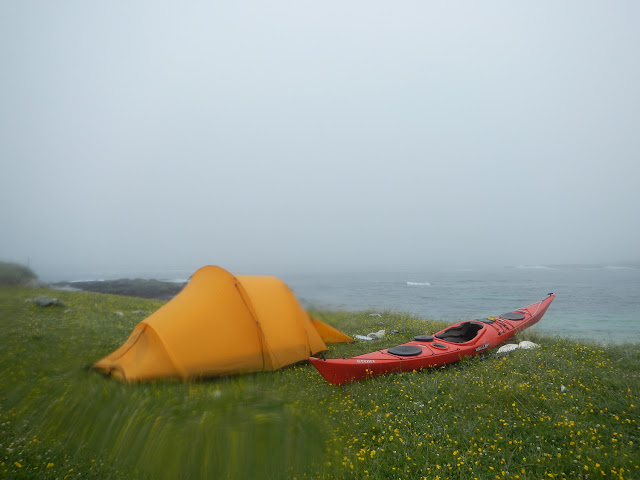 Things took a turn for the worse in the night though. I had to get out of bed in the early hours & peg down the extra guy lines on the tent as the wind had got up quite a lot, it was raining heavily on & off too.
There was clearly no point me getting up early so I had a lie in & contemplated my decisions whilst checking the forecast for the week ahead, it wasn't good. Wind & rain was forecast for the next two days & the following two days after the third, my motivation ebbed away with the morning tide as I wasn't prepared to sit out the weather at such an early stage of the circumnavigation. I had some tough decisions to make & I decided to call the exped off & leave it as unfinished business. 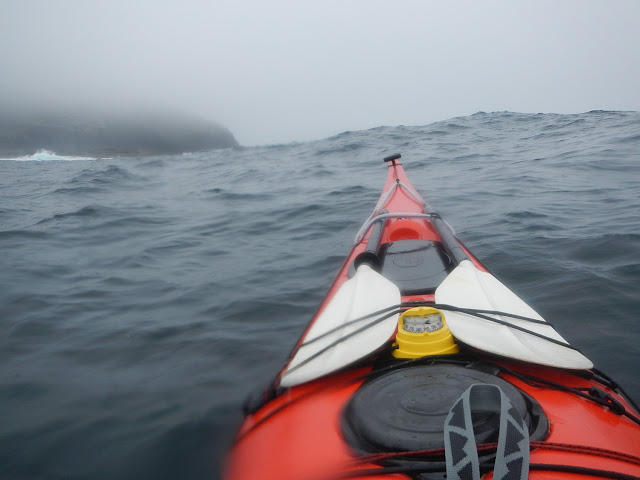 This decision however left me with another awkward decision, the weather was horrid & the visibility was terrible. If I stayed put I would be trapped at my campspot anyway as the weather was due to worsen still further on the morrow. I had to move today to reach the ferry port though I didn't relish the paddle in such conditions on such a very exposed bit of coastline but I had to do it.
The swells here were as I predicted, pretty big, bigger than the day before & the clapotis & shoals were creating a confused sea that focussed my attention. There were a couple of spots I noted the day before that I had to avoid, particularly a large dumping wave just offshore. It wasn't a long paddle to the shelter of Caolas Bhatarsaigh on the southern side of Barra though so I just got on with it. 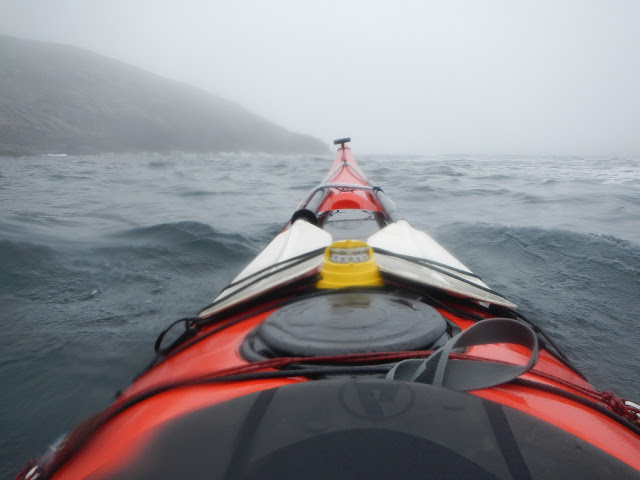 Back in Caolas Bhatarsaigh the vis was still pretty bad, I hugged the shore & at times couldn't evan see the far side just 5-7 hundred metres away. 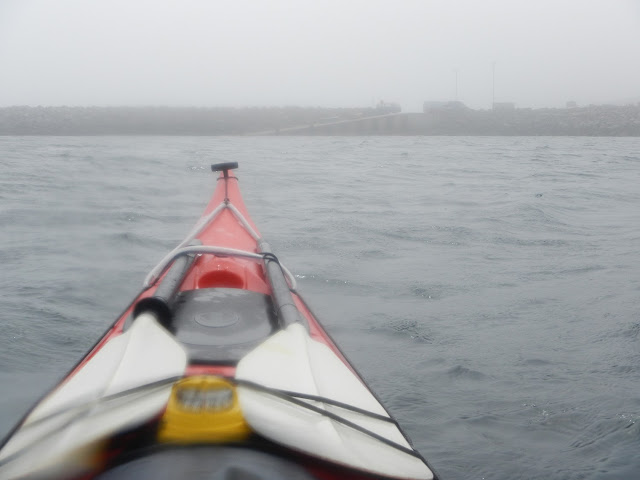 This bit I was dreading, the portage!
I would either have to fully unload the boat to carry it to the other side or find some helpful locals. as it happened a couple of ladies were jogging in the area & were very kind to help with the carry though I did feel a bit mean due to the excessive weight of a fully laden kayak with a months supply of food. 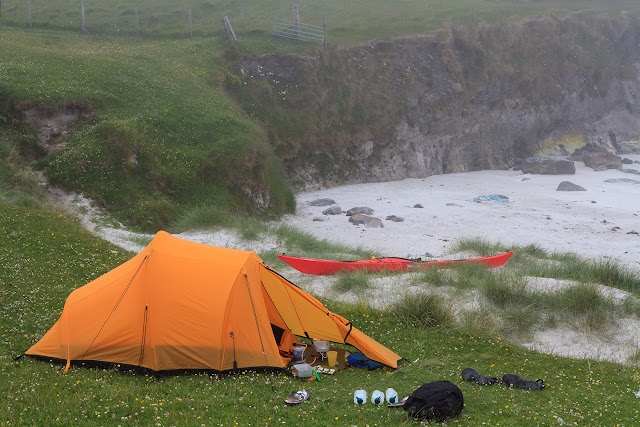 Portage completed & I made my way to a lovely beach on the north eastern side of Vatersay to camp for the night as the ferry was due at 07:00 the following morning. 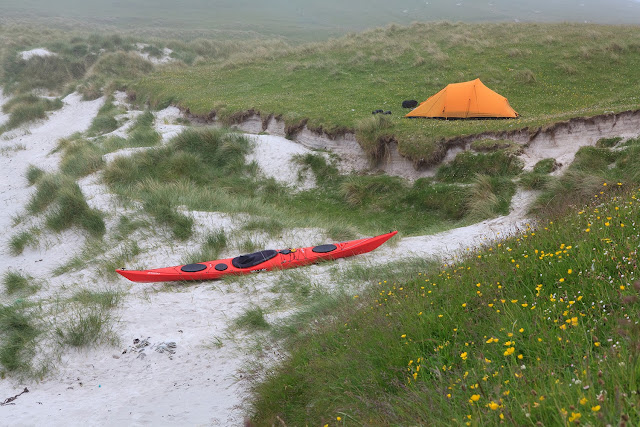 I made the most of my chill time & relished the peace & relative solitude on my last night in the Hebrides. 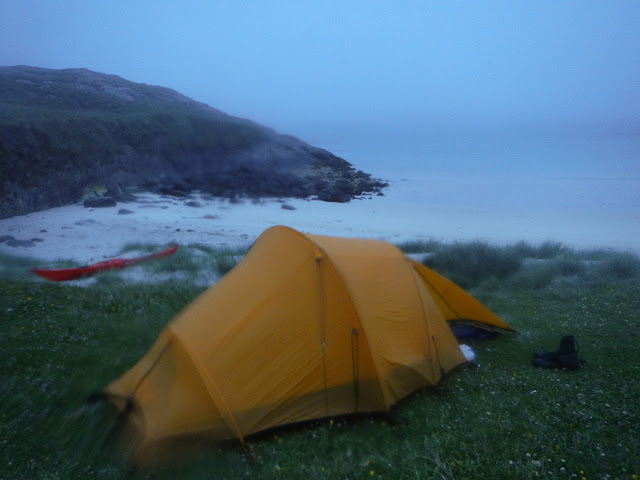 Morning brought more bad weather as predicted. I was up at 04:00 to get ready & across the 2 kilometres of sea to meet the ferry on time. 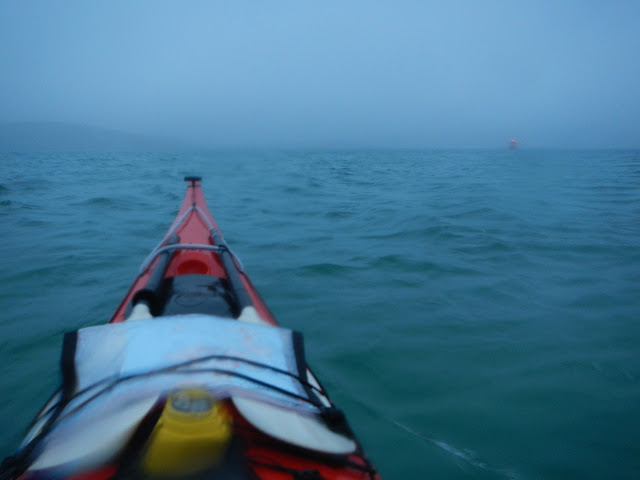 It was an uneventful paddle due to the sheltered location but the visibility was still low. A look at the map the night before showed that due north would get me there with no probs. 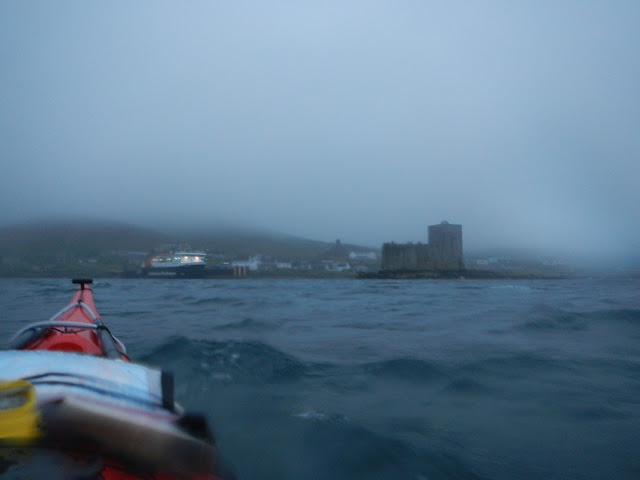 It wasn't long before Castlebay came into sight, appearing & vanishing again as if the visibility itself was tidal & transient. 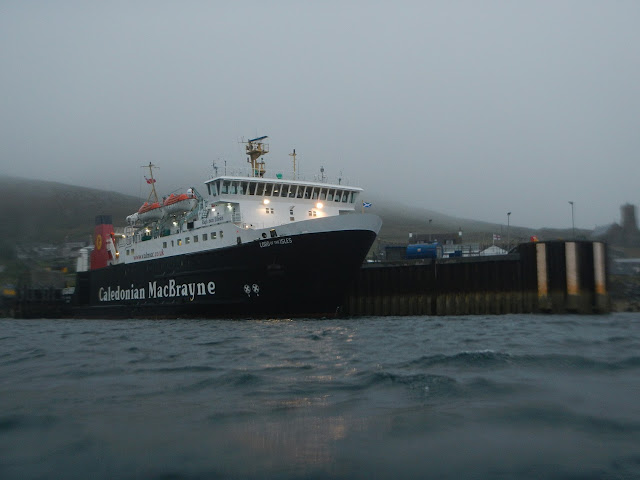 Lord of the Isles, my escort home. 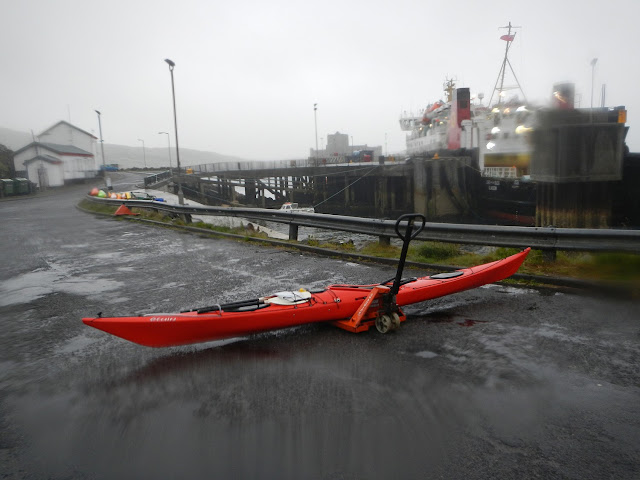 I was first person in the port as I'd made good time this morning. I found a pallet truck lying around & used this to get my kayak from the slipway to the ferry ready for boarding.

So that was it, a short but rather awesome adventure.
I had failed in the expedition but came away felling content in the knowledge that I had paddled some of the most remote islands in europe & with the most stunning scenery too.
I thought the solitude of the area might make me uncomfortable with my surroundings but that certainly wasn't the case. I found the solitude peaceful but on the sea the solitude could present a real problem if an incident occurred so it kept me on my toe's.
I'll most definitely be going back to the Hebrides as I've only scratched the surface of these magical islands. 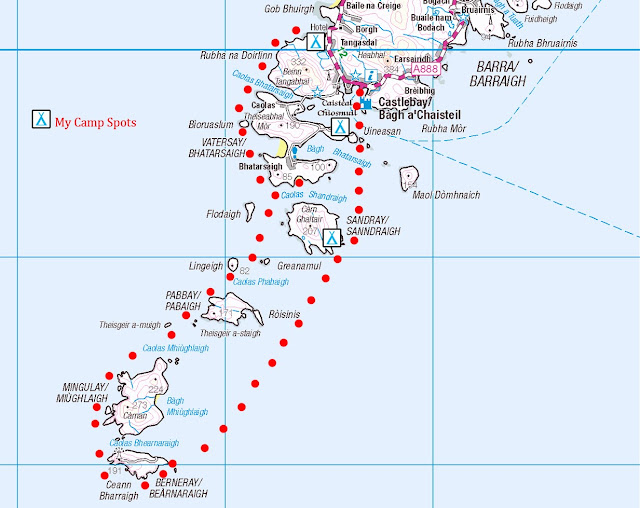