Hmmm, 9PM Thursday night I get a call asking me If I can video a wedding the following day? Sounded fun so I did.
It was a rather spectacular wedding & they had Stavros Flatley & Paul Pot performing in the evening.
I left the wedding around 11PM & got to Pembrokeshire for 1:30AM ready to meet the Glam Boaters the following day.
I wasn't sure whether to do the Pembroke weekend as I was due in Cornwall for 4 star training on Monday morning, but there were a few novices so a helping hand might be needed. 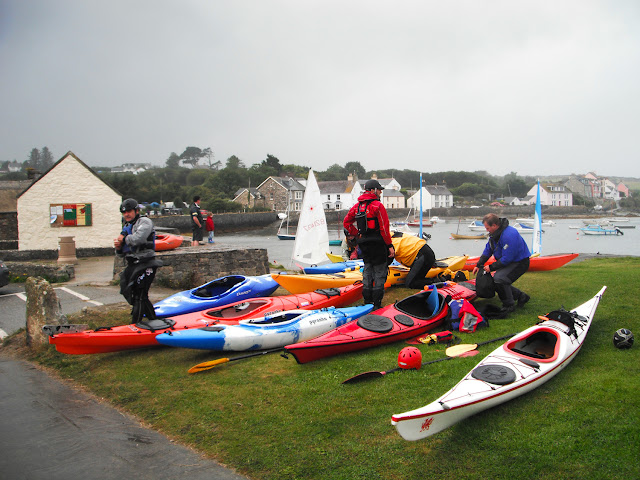 Day 1 ~ We all met up at Newgale Saturday morning & due to weather conditions decided to head to Parrog near Newport Sands.
Some of the club members had never been on the sea before so we needed somewhere sheltered so they could enjoy their first salty paddle. 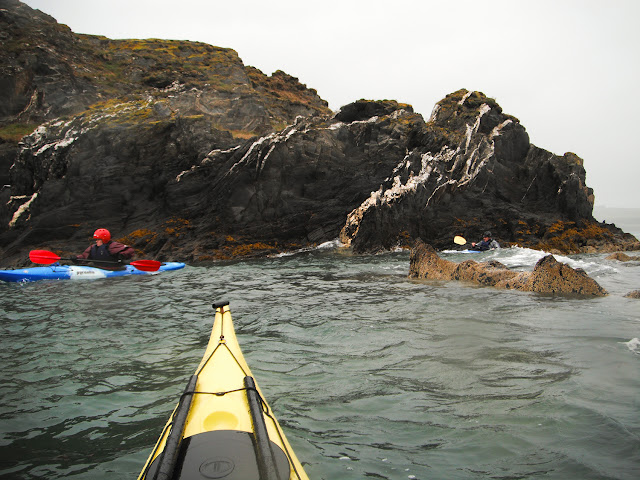 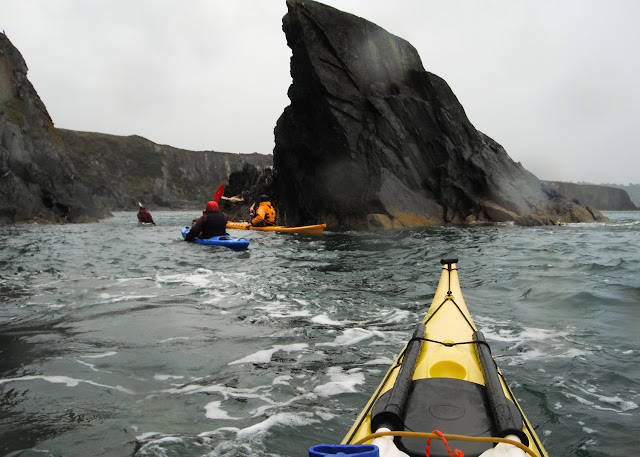 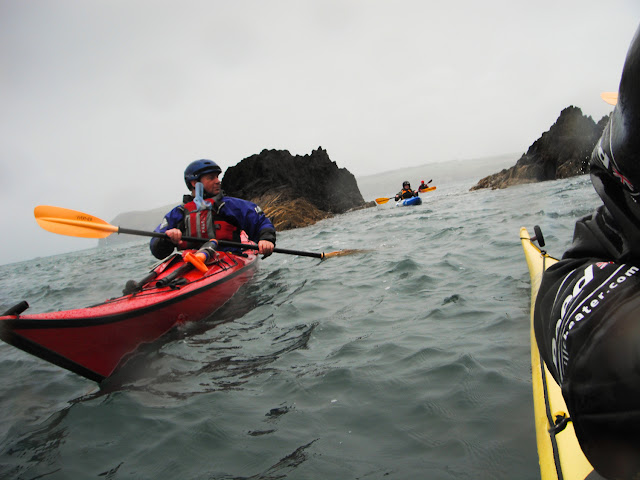 Andy the club coach watching them through. 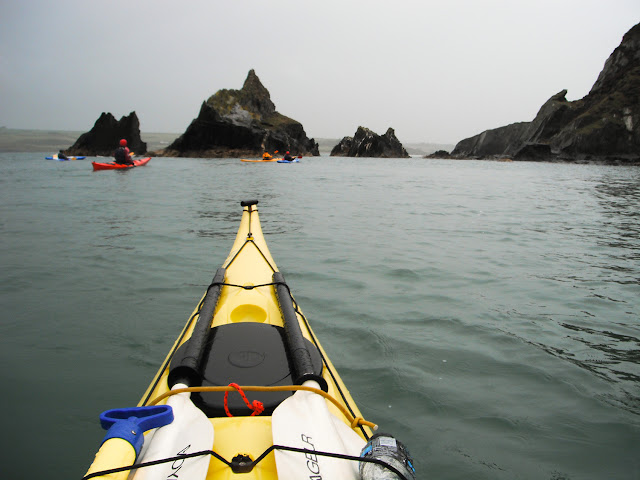 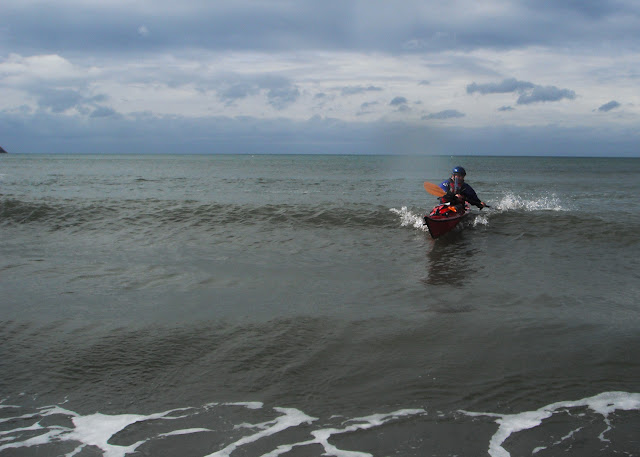 We didn't go far & ended the day with some surfing practice with some good clean waves coming in. I think we all enjoyed the surfing & with little incident :) 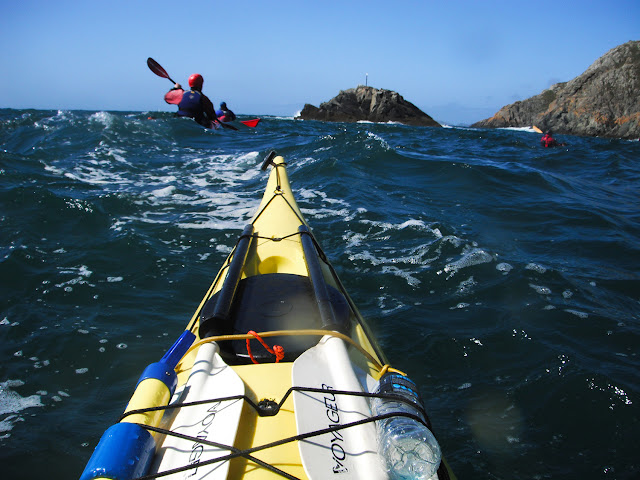 Day 2 ~ Solva today, we were hoping to get everyone out to Green Scar rocks & do some rockhopping outside of the harbor. It was clear once we were there though that we would probably have some swimmers so we played it safe & explored the harbor instead. 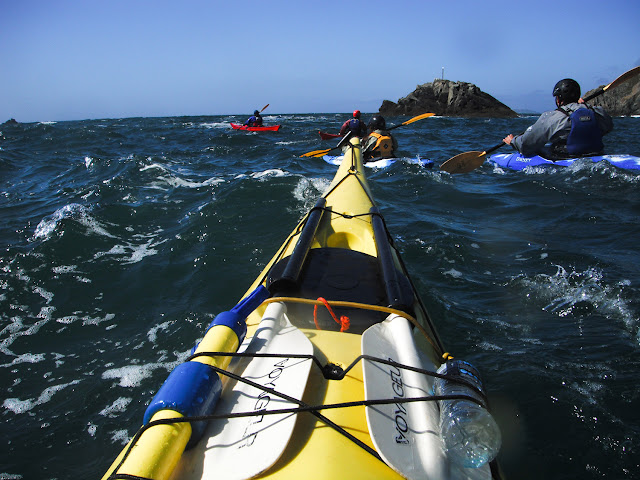 We did give them some excitement in the bumpy stuff by paddling out to Black Rock. I saw Peter do a good low brace, all good learning :) 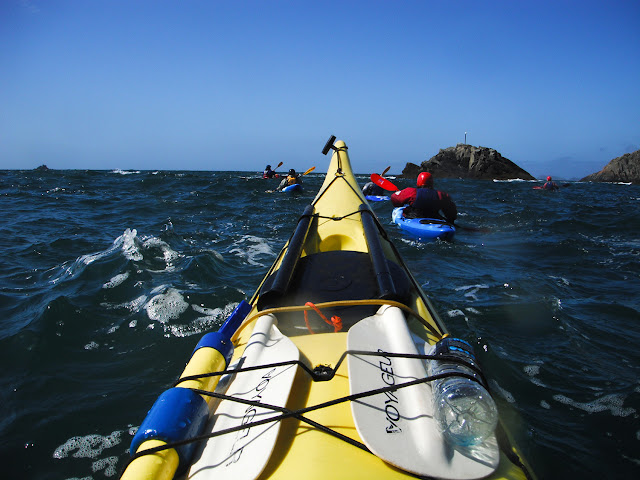 I left Newgale about 3PM & started the bloody long drive to Falmouth for my 4 star training with Sea Kayaking Cornwall. After a quick shower in Cardiff on the way through I finally arrived at the Sea Kayaking Cornwall HQ at 10:05PM & camped in their car park for the night. 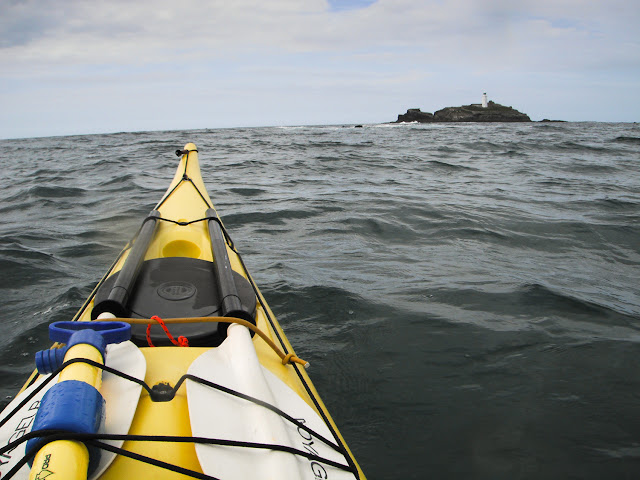 I chose to do some 4 star training with Sea Kayak Cornwall as I wanted to some surf training & I wasn't to be disappointed.

After a quick rescues session at Swan Pool, (in the sea not the lake) we then made our way to the North of Cornwall to find more testing conditions.
Before we launched from Godrevy Jeff gave a briefing & also explained that briefings should be given away from an area that could cause an adrenal reaction. I think he's got a great sense of humour as we were all stood on the cliff top looking wide eyed at the bloody big surf, (Nice).

I was given the task of getting everyone on the water & landing them all in the surf a little further along the beach. I think I demonstrated how not to land as I took a tumble & swam in after my boat (LOL).
Once we were all ashore we all went back out for some surfing practice. The waves were pretty big & had a lot of power, certainly the biggest I've been in :)
I was doing OK, catching some waves, shooting forwards & finishing on a bongo slide that I was sure would have me swimming???
I finally finished with a spectacular capsize & got spun around a few times before I could get out of the kayak. A fab learning curve & I'm definately not going to shy away from surf in future.
Everyone did great & steve, one of the students evan manage a couple of rolls in the surf. Jeff was doing pirouettes on the waves & looked quite at home, I definately need a lot more practice. 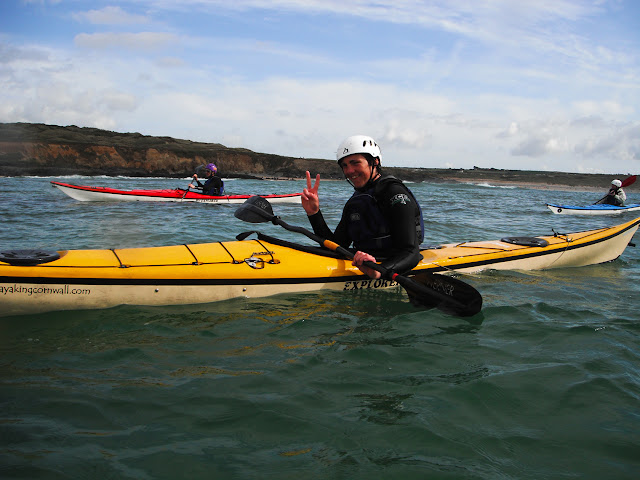 It was all grins after the surf as we headed back to the vans. you can just see the surf we were in at the back of the image. 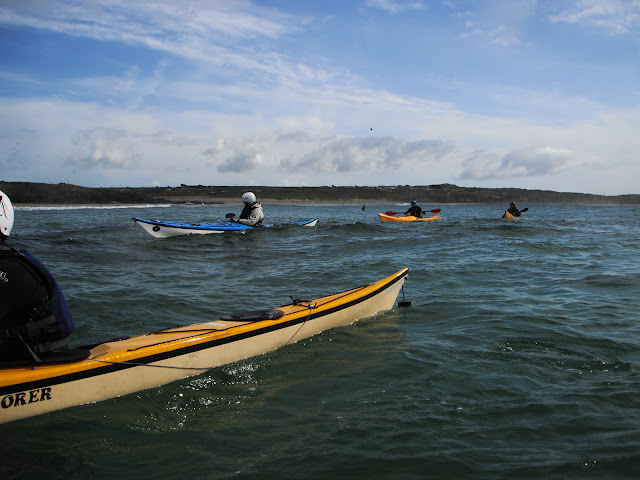 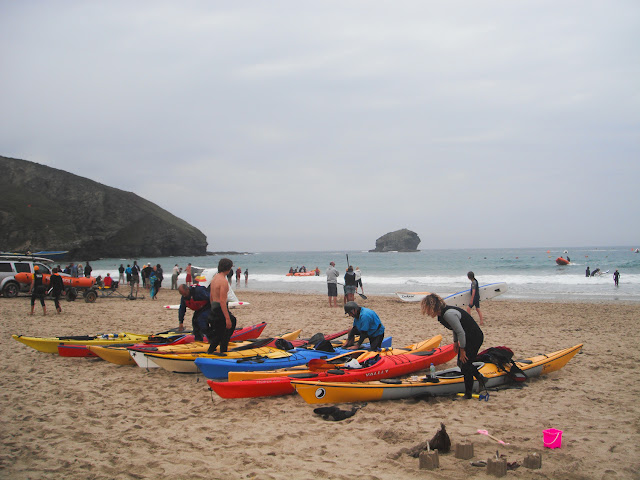 Again on the North Shore, we launched from Portreath. Rockhopping & leadership were the goals today. 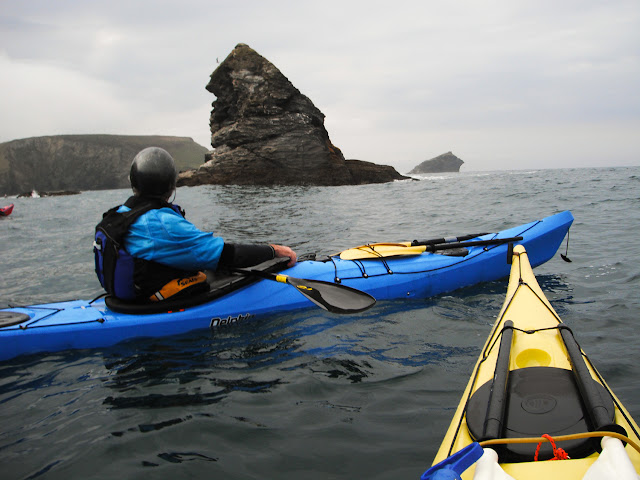 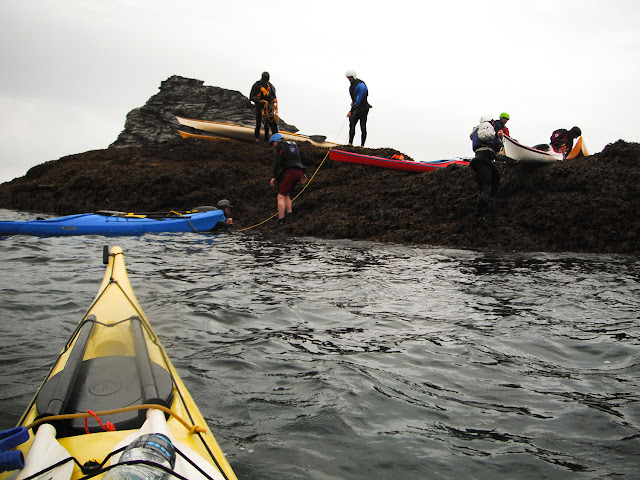 Jeff suggested stopping for lunch right by a beautiful secluded beach, should of known he'd get us swimming our boats onto a small rock in the bay instead. 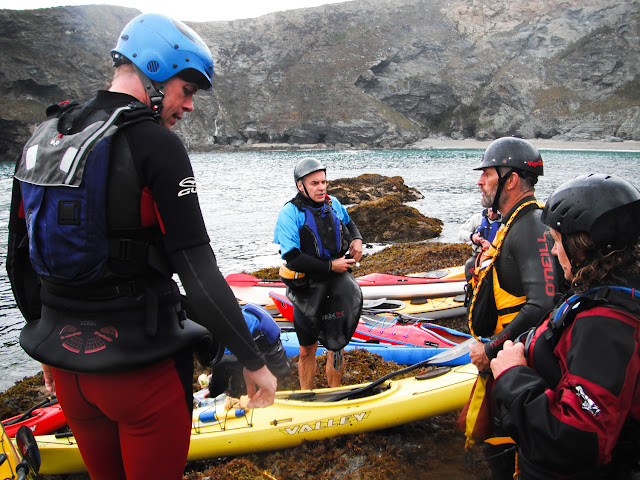 Finished the day with some Surf rescues at Portreath & caught a good wave too.
Day 3 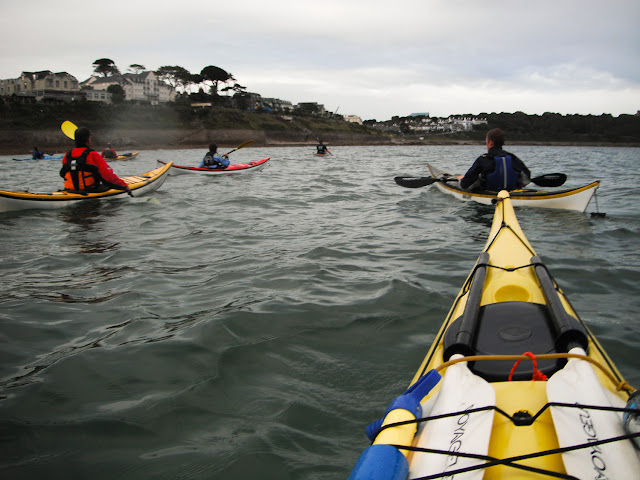 Classroom day for the coastal navigation & tidal planning training. This is a requirement for the 4 star leader assessment & no paddling was required. I did learn a few things though it was quite basic & I think most of us already knew the main bits. We were with Simon for this lesson & he did a fab job explaining things & evan managed to make me understand vectors where so many books have failed.
I did get out for an evening paddle though. They had a large group of people hiring kayaks for a Wednesday evening paddle & Sam & Tim, (two of the 4 star students) & myself volunteered to help out. I was quite surprised to be given a group & told to be back for 8:30PM. Hmmm OK, should be fun. At least my group all had some river experience & weren't novices.

To warm up I set them too edging & soon had my first x-rescue to perform. Jeffs training was coming in useful. I think its good to see people capsize on edging practice as their really trying.
We made our way along the coast from Swan Pool to Pendennis Head before heading back in the dusky light.
Back a little early I threw them in the deep end a bit with some cross bow rudder practice :) after one capsize who rolled up, (forgot your name but well done:) I then set them some stern rudder practice.
Before getting of the water my group wanted to practice their rolls, wasn't expecting that & well done to all for trying. Thought I'd better get them off the water before the coastguard turned up, a great night out. 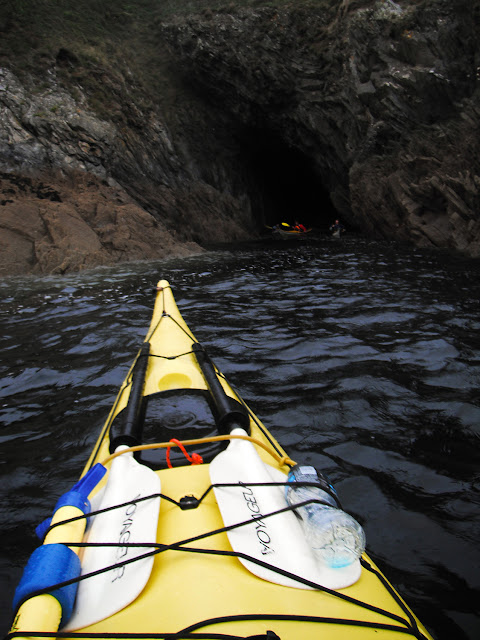 I had planned to paddle around the Lizard on Thursday but with a South Westerly force 4-5 occasionally 6 with a moderate sea I decided against it & after 5 busy days of kayaking I think I needed a rest...

Oh, and Jeff & Simon from Sea Kayak Cornwall were fab & I would definately recommend them.

I think I got what I need to go for my assessment though I will have to work hard on my skills & practice my leadership too. Time to rope in a few guinea pigs from the club ;D
Posted by Taran Tyla at 18:45