With a gentle forecast I was expecting a gentle lazy paddle today, nothing too hardcore & certainly not breaking a sweat. Boy was I wrong, Turned out to be a day of plenty of unexpected action if you looked in the right places :D 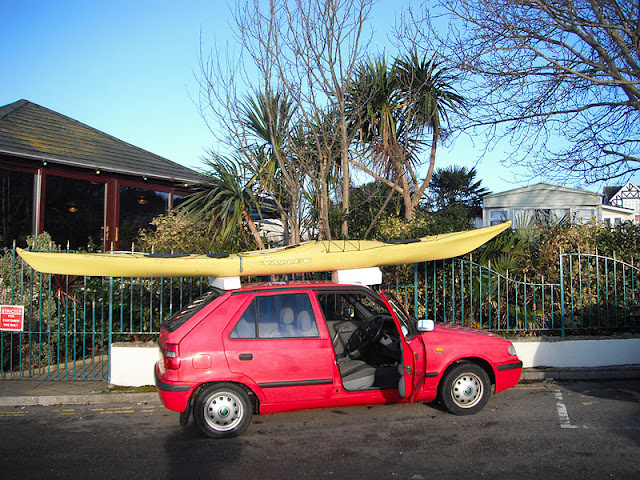 With my lovely ride 'Myvanwy' feeling very under the weather with a broken timing belt :( I had to talk nicely to my Mum to pinch her Skoda.
Looks kinda cool with a sea kayak on the roof. 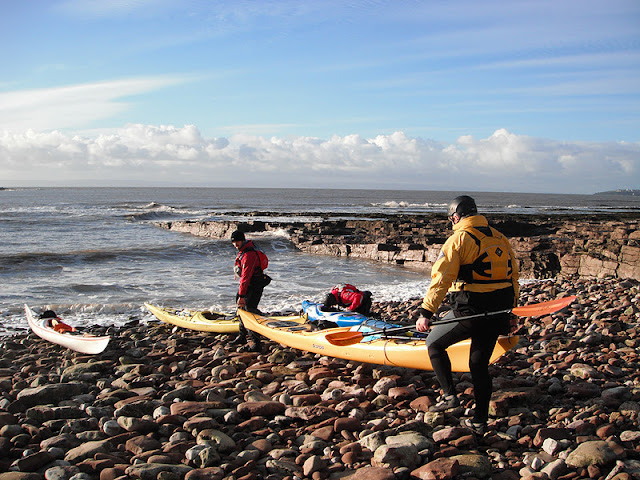 We all met up in Sully with the intention of paddling to Penarth. It was a chance For Peter & Gareth to get some time on the water & for Peter to get used to his new Scorpio. Stuart decided to tag along too which is fab as I can pinch some of his images for my blog post. This image was my last contribution to the day as my battery went dead, (Whoops). 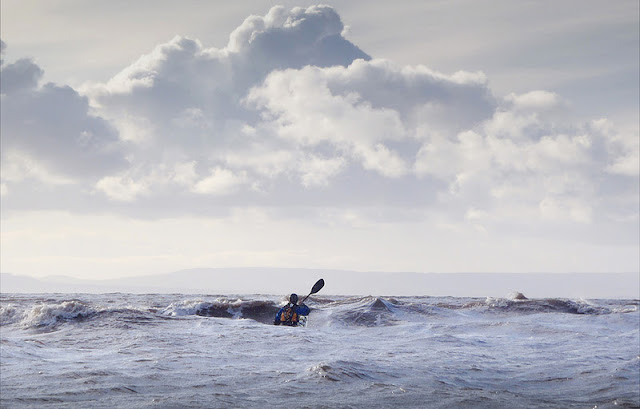 Fun, fun, fun, that's what I wanted & hoped for. A quick ferry glide across to Sully Island & straight into the race off the West side :) 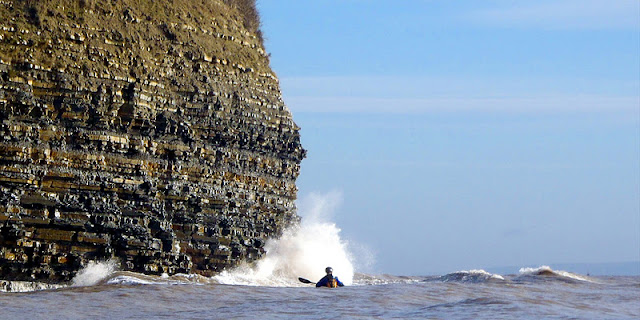 Peter pops ashore to stretch his legs. He's still trying to figure out how to adjust his boat to avoid dead legs, an annoying problem I had for ages in my Orca.
In the meantime I go for a play off the headland at St Mary's Bay. 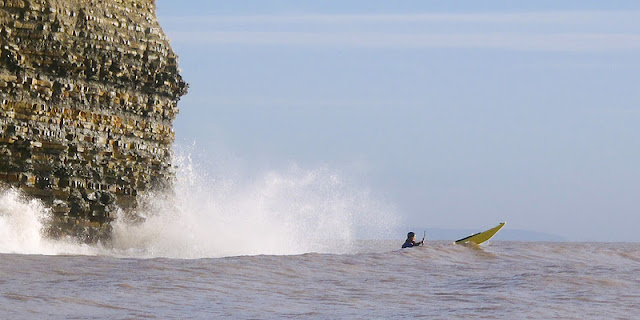 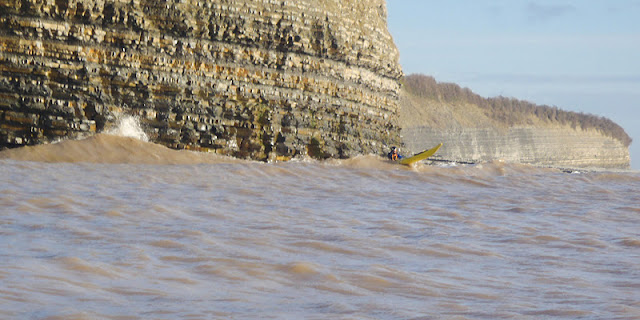 I could seriously stay here all day, Loving it :D With Peter back on the water we head off, I catch a wave close to shore & look back to see Peter swimming, whoops. a wave caught him side on & tipped him out though to be fair he was trying my paddle at the time & had about 45 degrees less feather than he's used to. 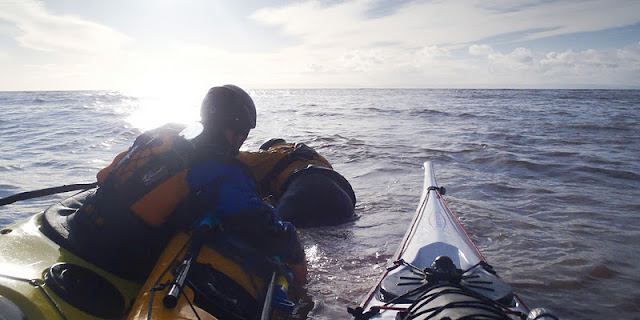 I really struggled putting him back into his boat. His deck was arranged with his spare paddles mounted on top of his deck bag which made it bloody awkward to get hold of. I suggested afterwards that he push his blades under the deck bag, trial & error I guess. 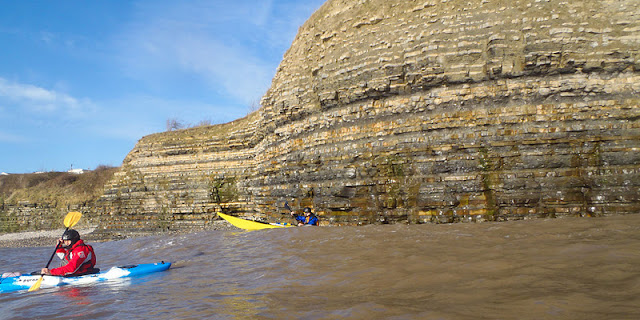 We paddle back for another play at St Mary's Bay & Gareth comes & has a look too. 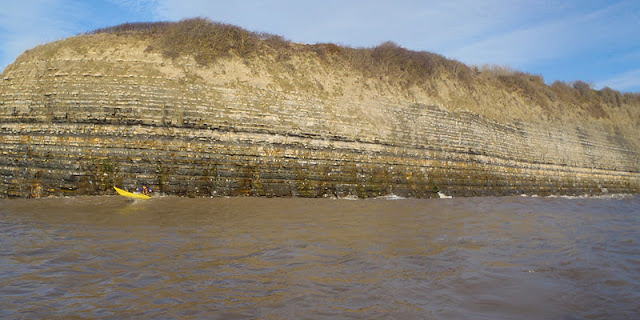 After this we headed to the South side of Sully Island Where there was now some decent waves in the race, hence no pictures as it was quite lively. We played & practiced our surfing here for a bit to the amusement of the fishermen on the island. I think we all had a bit of a YeeHaa! moment :) 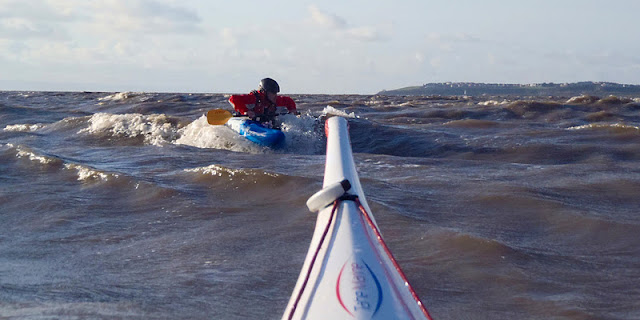 Approaching the West side of the Island we spot some nice standing waves forming as the tide ebbed. I've only seen this once before as the causeway is usually quite slack on the ebb. My theory is that as the tide picks up speed it pushes further off shore from Lavernock & St Mary's Bay with the main flow missing the causeway. We arrived just after the tide turned, hence the waves but as the tide picked up speed the waves died off & the causeway went calm again.
Its something I'm going to look into as we had a great time surfing the waves while they lasted. 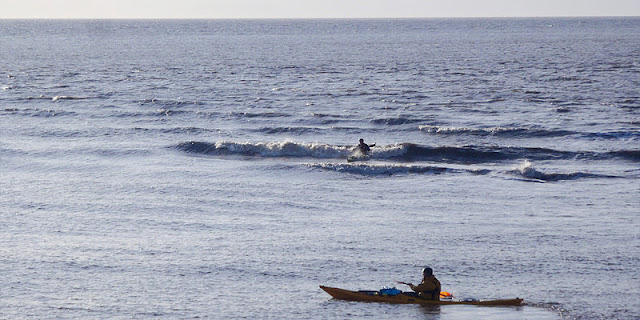 One last ride on the dyeing waves & a few rolls before packing up content & happy...

Thanks again to Stuart for sending me some images to use ;D
Posted by Taran Tyla at 15:49