With a couple of day's low winds forecast I decided a camping trip to Brean Down over in England would be nice & I text Noel to see if he was up for it?
Turns out he was planning to go paddling in Pembrokeshire that day so a free lift was offered if I did the planning, happy days :D 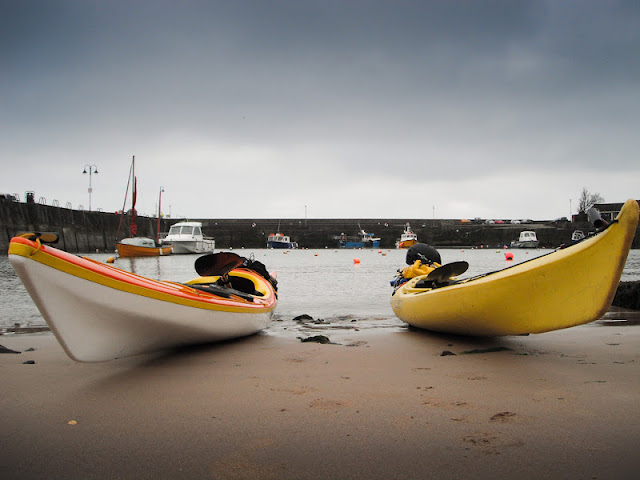 I knew straight away where to go & a quick scan of Google Earth found the launch site at saundersfoot, somewhere neither me or Noel have been before. Sure I've paddled past it but that don't really count. 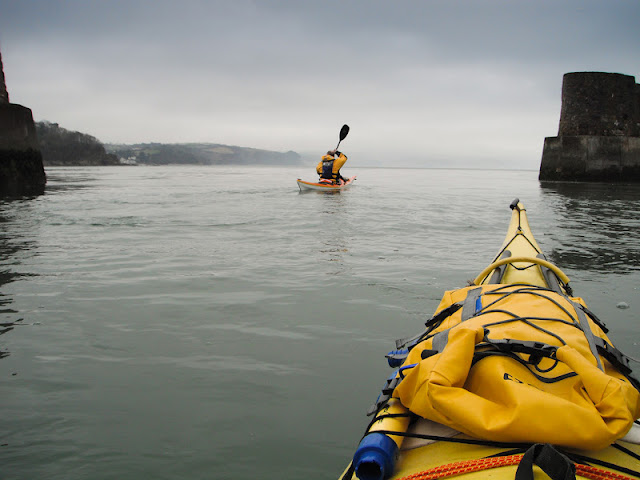 Noel exploring the new handling characteristics of a fully laden boat as we leave Saundersfoot harbour. 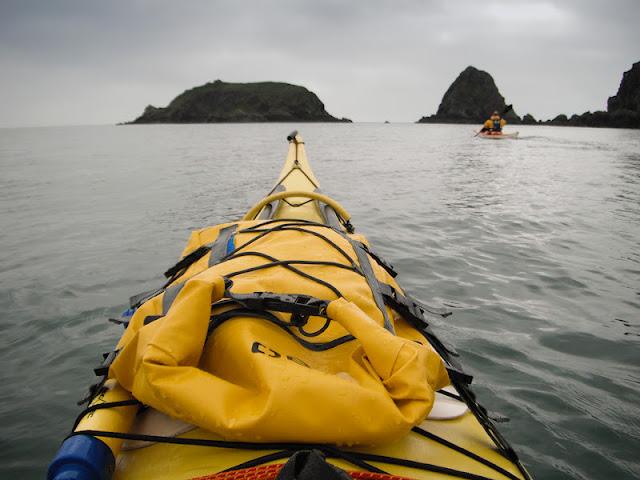 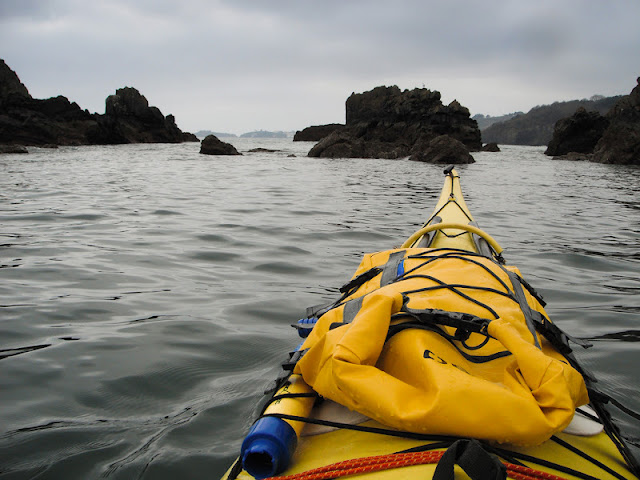 A wee rock-hop then onto tenby, visible through the gap.

Admiring the view as we set course for Caldey Island.

Landing at Caldey, I've got very happy memories of this place from my 'around Wales' trip & this wonderful Island is no less impressive in the winter. I think Noel was impressed too :) 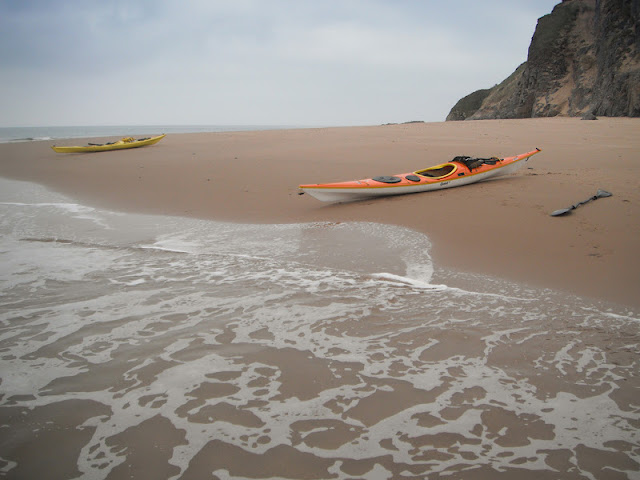 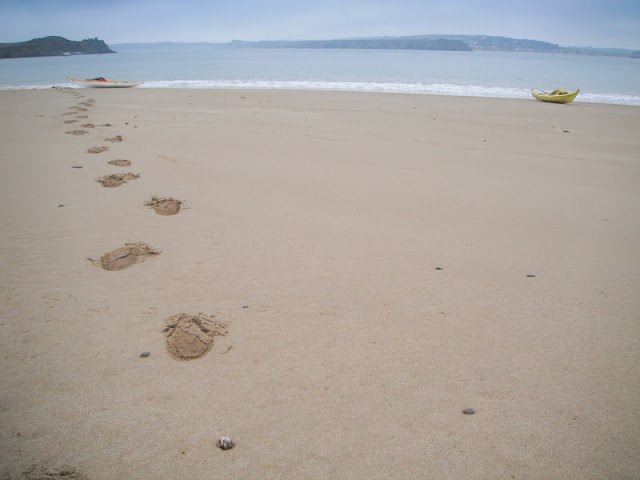 We have a short break here as its way too good not to stop & I demolish my first choccie bar, whole nut, Mmmmm. 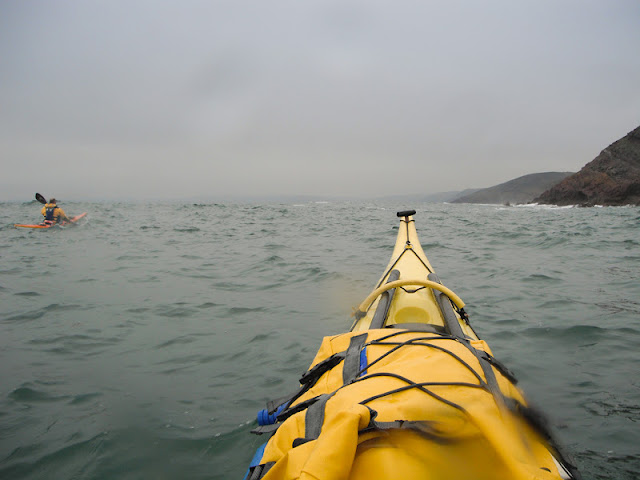 Then it's an exploration of the shore as we circumnavigate the island & head into the long'ish crossing to here, Old Castle Head. 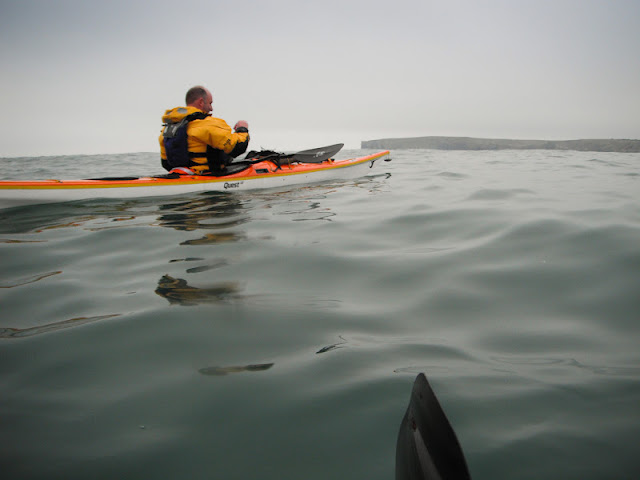 The coastline is amazing here & a rock-hoppers paradise, we appreciate it despite the aching arms though are relieved when Barafundle finally comes into view. 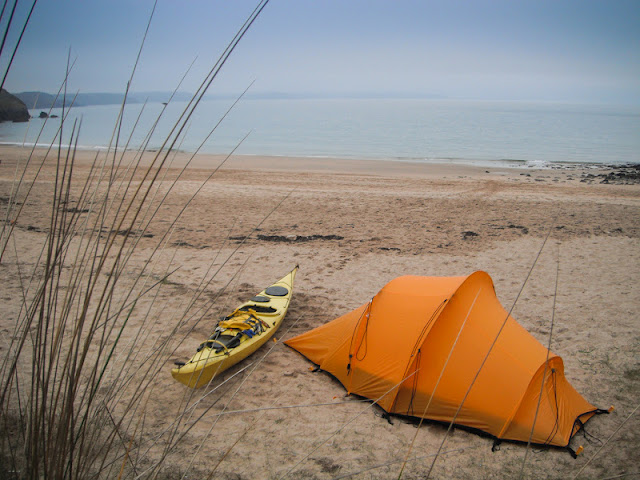 Home for the night :D 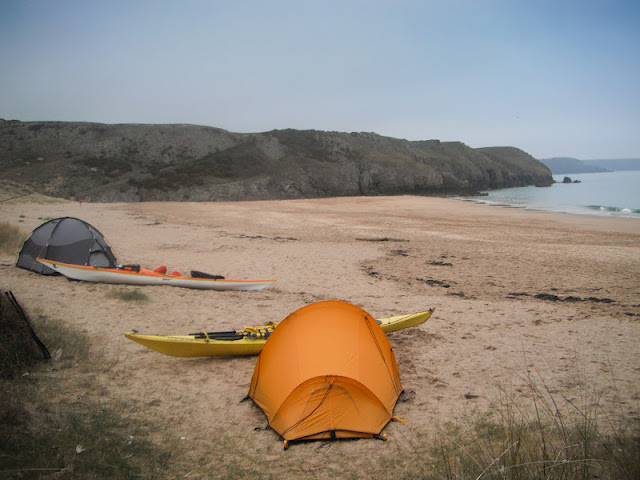 Could of picked a worse spot. Barafundle has been listed as one of the Worlds top 10 beaches several times now, part of it's magic it that you have to walk a mile or so to get here though I'm sure views to die for helped too.

A photo I took last time I camped here has just won me a Valley Etain, courtesy of Valley Kayaks & Ocean Paddler magazine. Looking forward to picking it up in a couple of weeks. 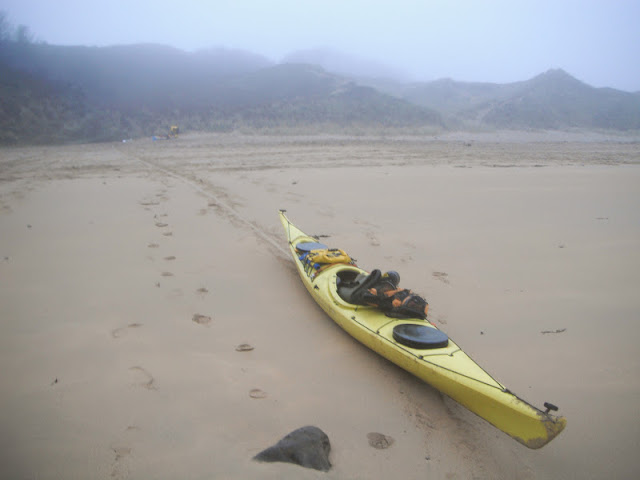 After a very mild night we woke to thick fog & a stiffening breeze, gonna have to work a bit harder today. 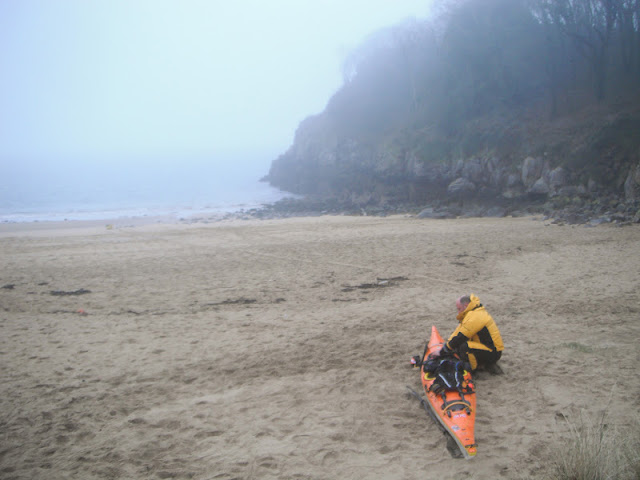 Noel trying to squeeze his pillow back into his kayak. 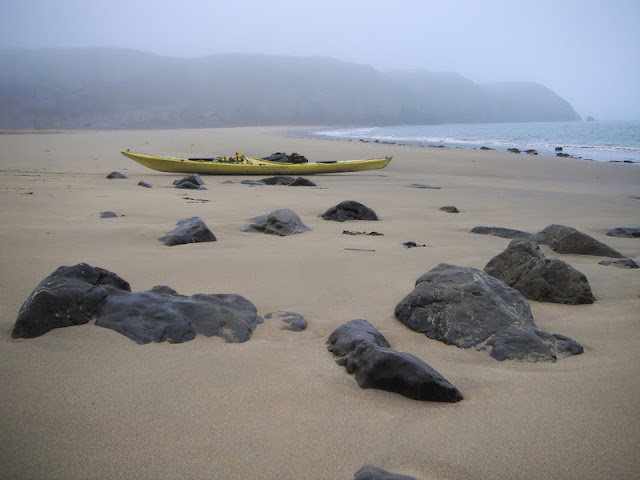 I think we'll be following the shore to start with & hope the fog soon lifts. 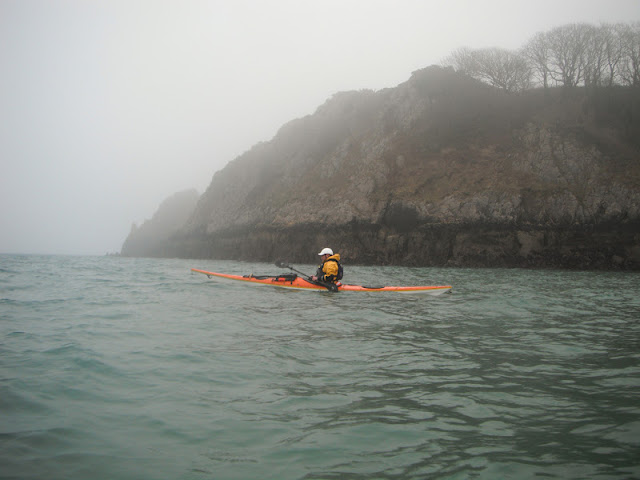 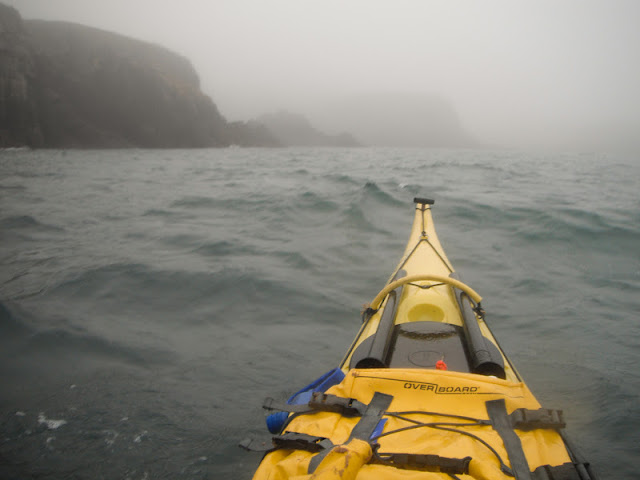 It's wonderfully atmospheric on the water & I feel I'm seeing a side of Pembrokeshire that most people miss. 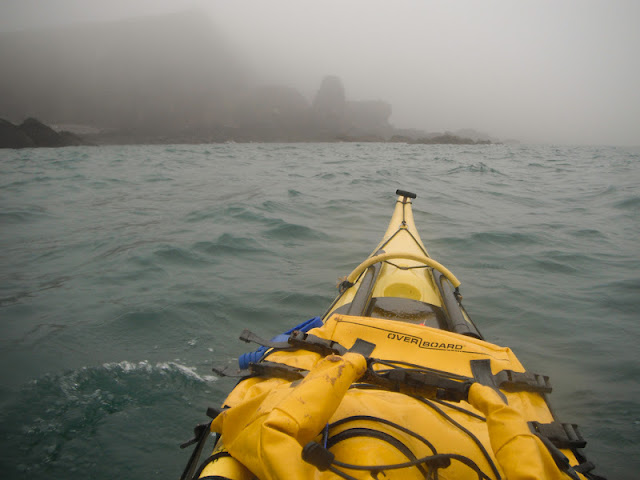 I'm beginning to feel like I'm living out 'Lord of the Rings'. 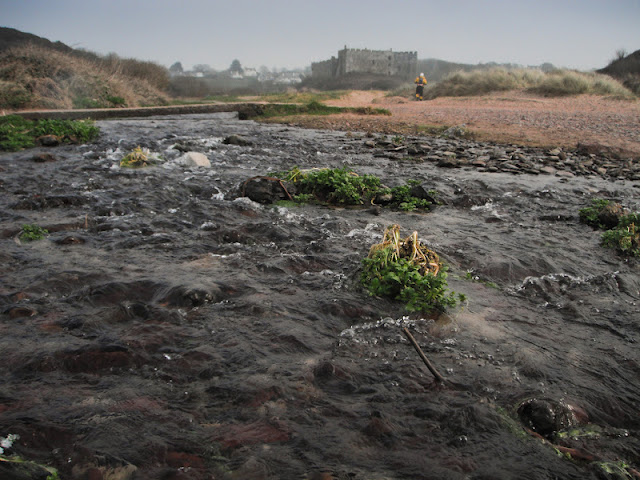 I assumed there would be surf further along the coast as the shore started pointing into the wind so I suggested pulling in here for a rest. Turns out it was Manorbier, a surf beach (LOL). I was following Noel in when I glanced behind & saw the most beautiful, clean green wave bearing down on me. Should I back paddle over it to avoid hitting Noel or go for it? I reckoned I could miss Noel so I went for it & was riding in with style, bow buried in the water. Noel caught the wave too & I was hoping like hell that he went left or we might of got tangled. luckily he was thinking the same as me & broke left whilst I went right, both grinning at our unexpected treat from Poseidon.
It was a lovely beach that I've not visited before so I'll make amends for that in the summer & hope for some more clean, green waves :) 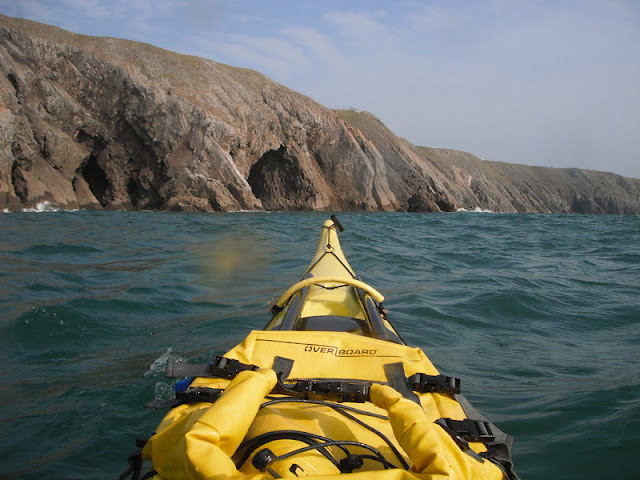 Near Lydstep Point I came back in closer to the shore, it was pretty dramatic though I was really suffering by this point & finding it hard to enjoy the views. This was my first paddle for a couple of weeks as I was trying to get over a wrist injury but it hadn't healed & had been killing me all day. I also had a stinking cold too but I'd still rather be out here than anywhere else. 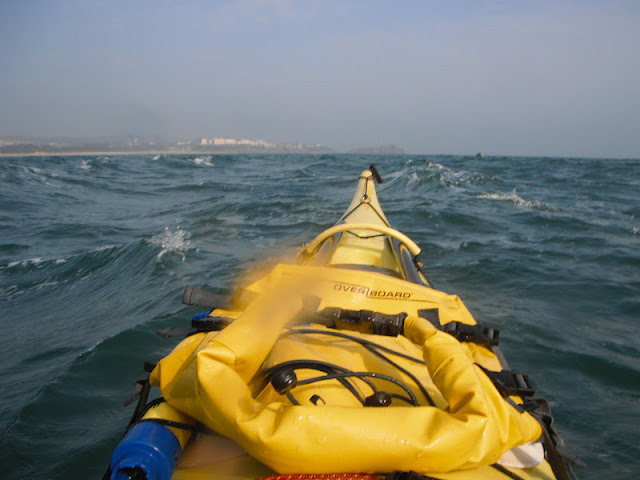 Tenby finally came into view but me & Noel were finding this last section a bit of a slog & the side on waves kept it interesting. This was the last shot I got as my camera is refusing to work anymore. It's been deteriorating for months so I wasn't surprised I just wish it hadn't gone when I was approaching a seriously picturesque coastal town.

We stopped for a very well earned rest on the little beach next to the fort & recharged with a coffee (cheers Noel) before the final push back to Saundersfoot.

I've never tried rolling a fully laden sea kayak so I gave this a try back at Saundersfoot harbour & interestingly the kayak wouldn't invert? It just laid on its side & I had to switch around & roll up on my offside. I will have to experiment with this more when I'm less tired.

Thanks to Noel for the lift & company on what was a pretty bloody awesome trip.
Where too next??? 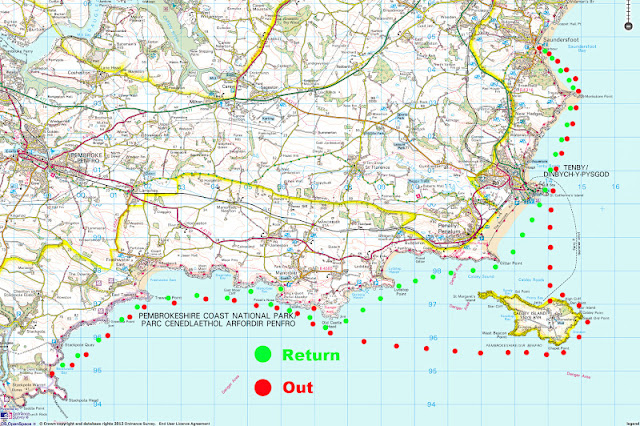