I wanted to do something a bit special this weekend so arranged to meet Stuart in Pembrokeshire with the intention of leaving one van a long way away & paddling back to it with a camp in between.
I decided that we should paddle from Pwyllgwaelod on Dinas Head all the way back to Freshwater East but after some discussion we settled on finishing at Dale. 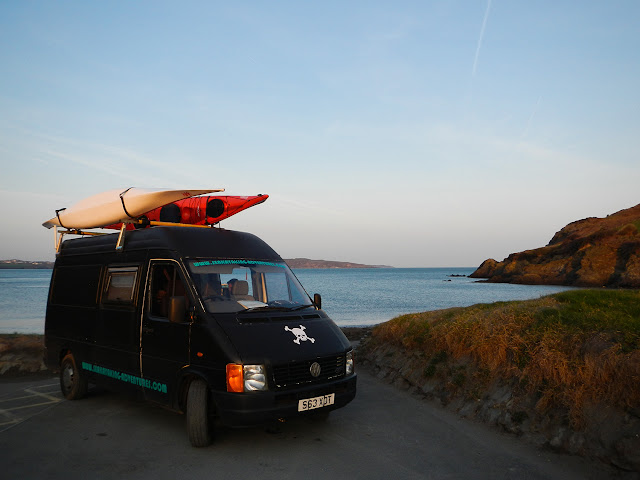 We arrived on Friday evening at Pwyllgwaelod in unseasonably warm weather. We had a very chilled out night in the quiet of the Bay in preparation for some decent milage the next day. 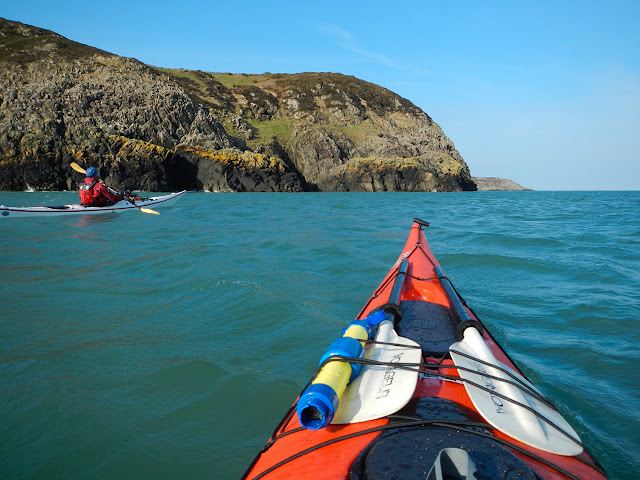 And what a day, the conditions were almost perfect. I say almost as there was a bloody strong breeze, on our backs mostly but it did keep changing which saw the skeg being repositioned or withdrawn throughout the day.
The first section from Pwyllgwaelod saw us surfing in following seas towards Strumble Head. 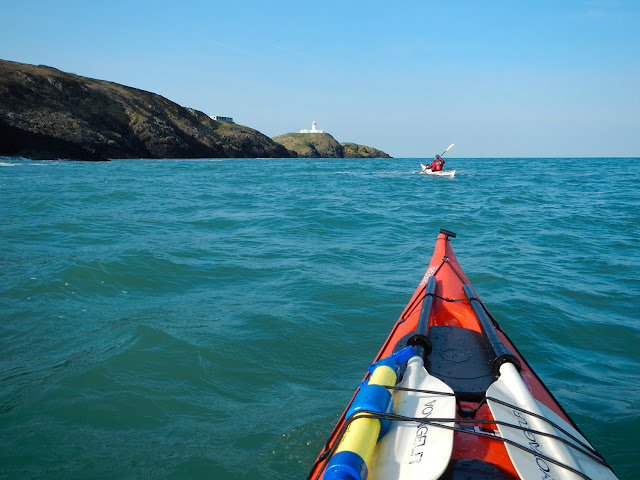 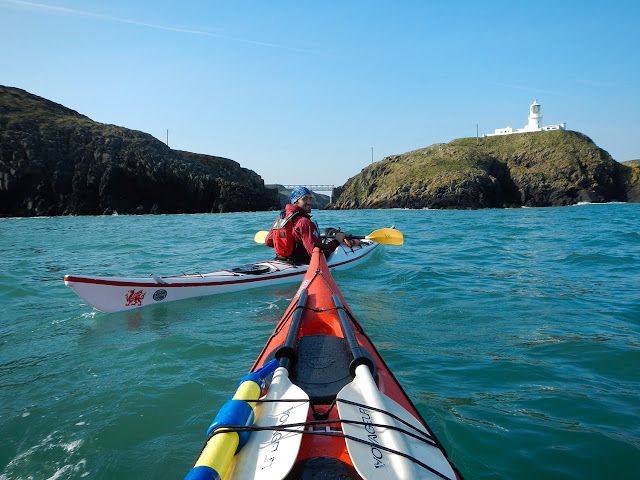 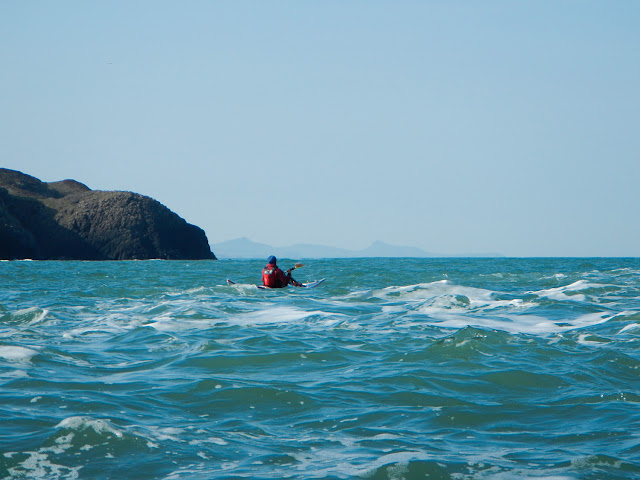 Though there was a little action. 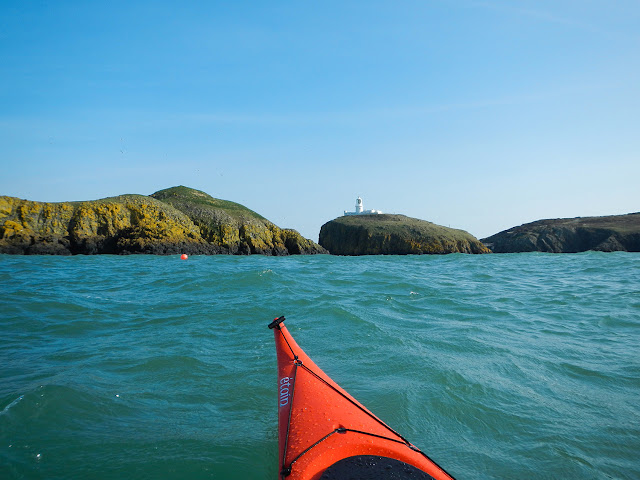 Looking back at 'must do' for sea kayakers, a lovely spot. 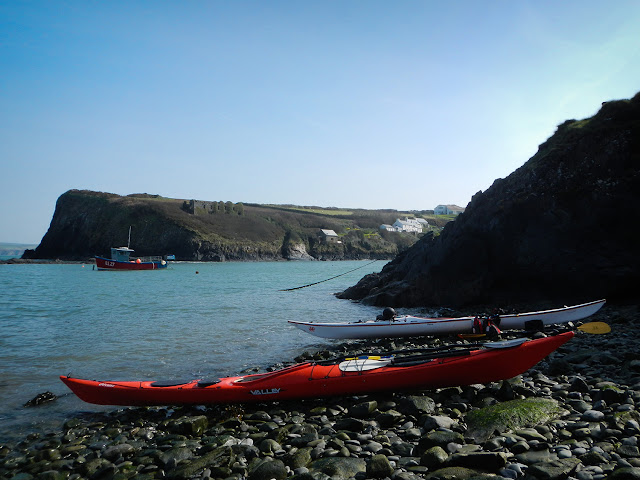 We pull into Abercastle for a quick break, this almost became a feature of the day, I must be getting old? 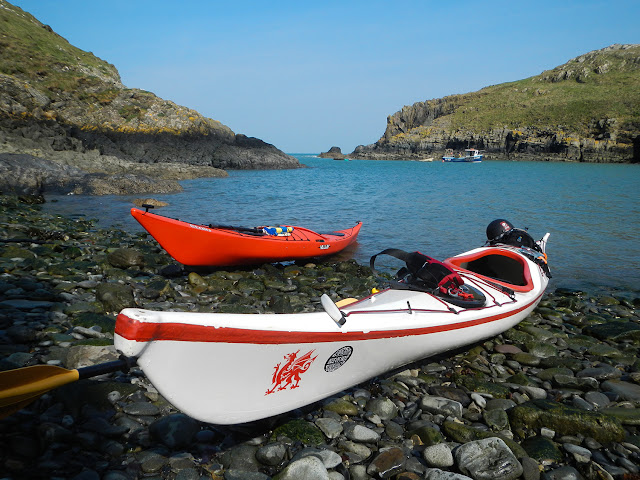 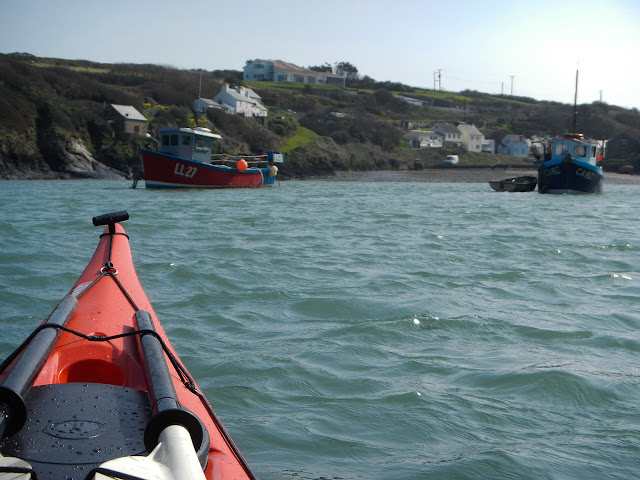 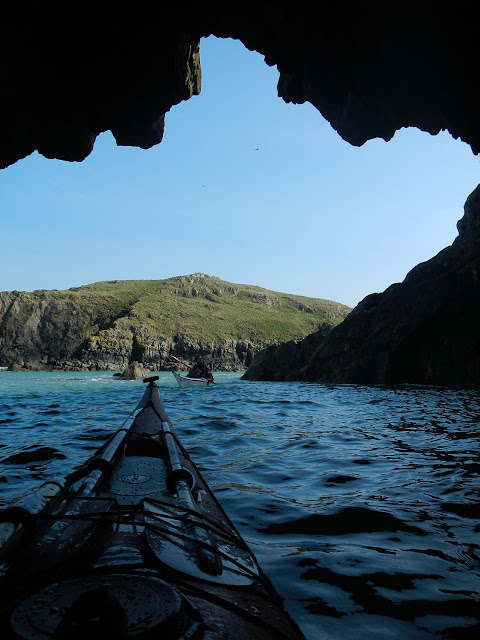 A lovely cave at the entrance to Abercastle. 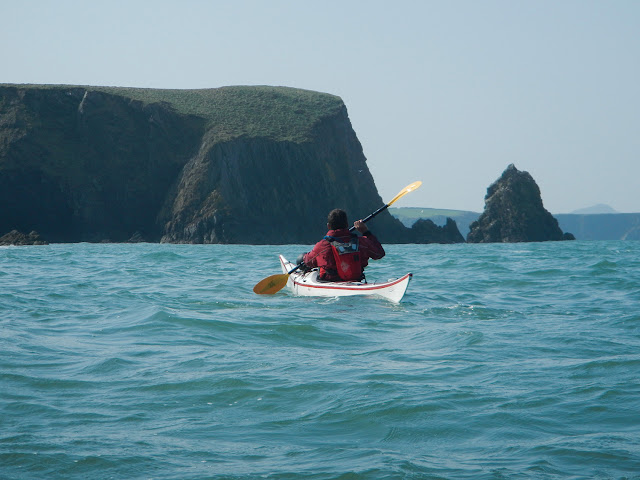 Back on the water & counting down the miles to St Davids. We would paddle further than St Davids but felt that as we would be turning South there, that it would be a turing point, literally, to our journey. 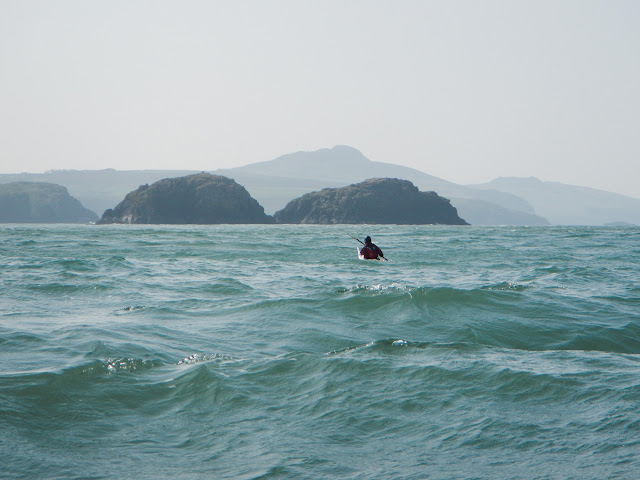 Stuart up ahead made a dash for shore here, the reason being a rather huge overfall to our right. Can't say I blame him as I followed his lead (LOL). 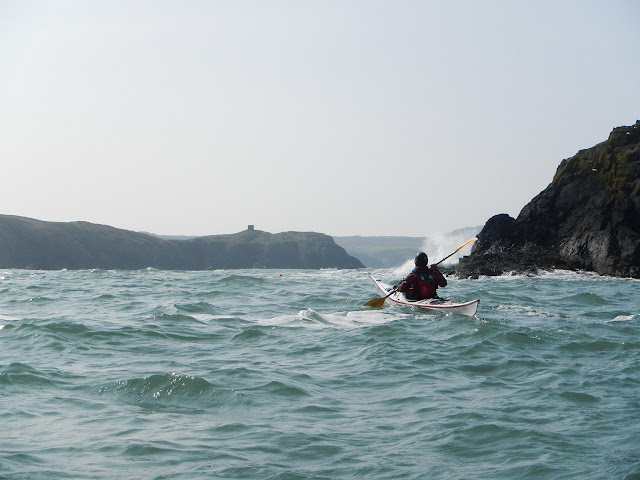 Think we were approaching Abereiddy here? 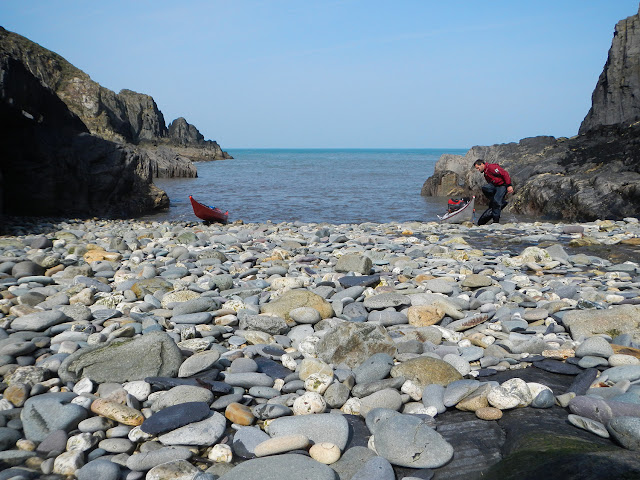 Another quick break on the last beach we could land on before rounding St Davids Head. 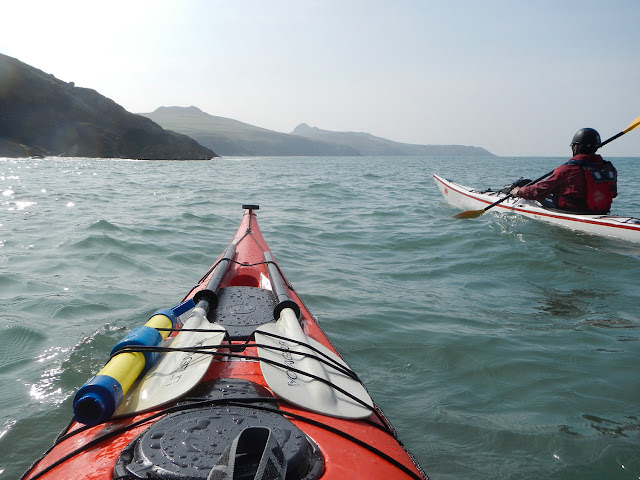 And then we were off heading into the fast currents of St Davids & rather enjoying the easy speed. Nearing the head we were treated to a pod of Dolphins swimming into the current though my attempts to photograph proved futile.
I was wondering by now what the wind on tide conditions would be like as we started to head South into the wind. 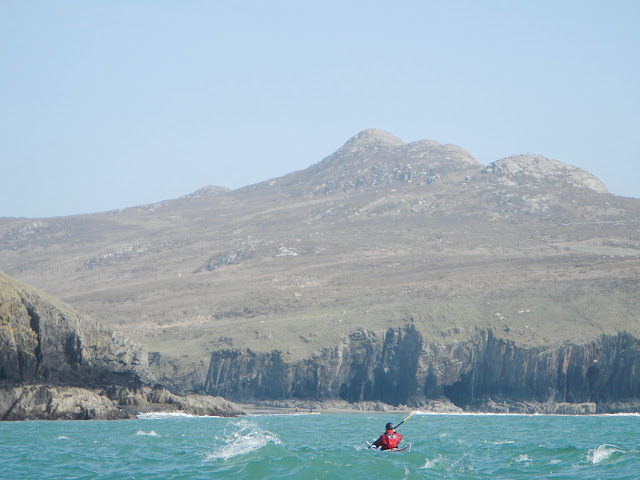 The answer was quite lively. I took this after I was through the worst of it.
Just before heading into the beach we bump into a group of kayakers doing their 5 star training & a chance for me to meet Richard from the white water centre in Cardiff. 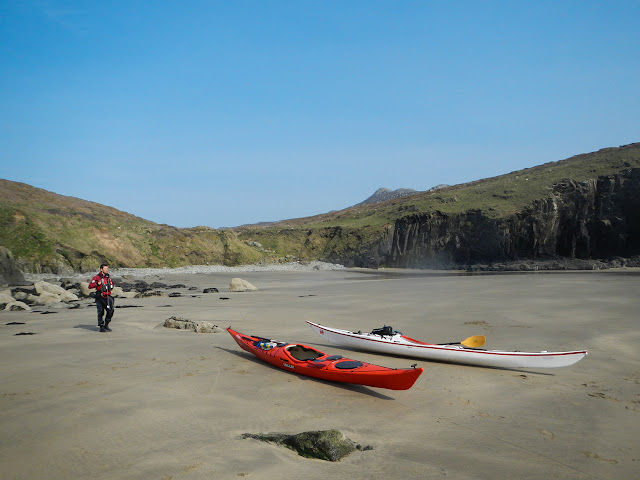 We pulled into Porth Melgan for yet another break. I was starting to feel a bit tired but worse was the chaffing under my arms pits from my wet rash vest,  it was really starting to sting but we couldn't stop yet. We should at least reach St Brides Bay before stopping. 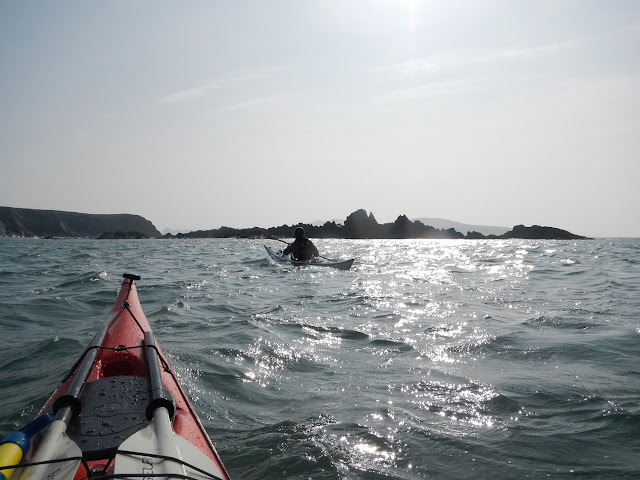 We plough on towards Ramsey Sound where I suggest heading to Porth Clais to set camp, I was really suffering now & wanted to get off the water. 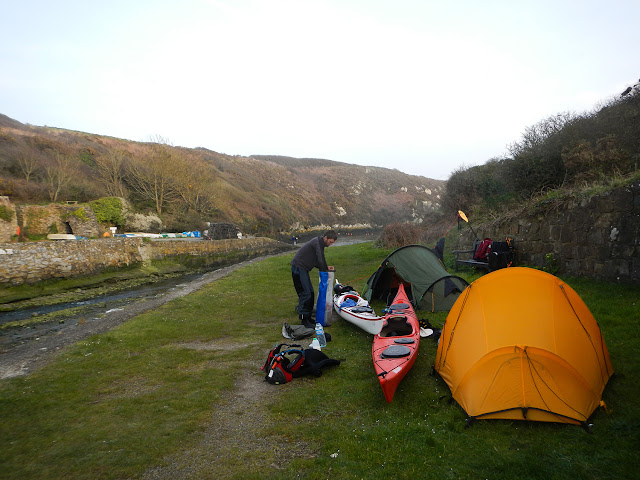 The last few miles were really tough for me & the conditions got really quite rough as we turned into St Brides Bay, some of the swells were about 10 foot & got alarmingly steep near to the rocks. Evan with sore arm pits it was still quite entertaining.
I stripped off real quick once we were on dry land glad to no longer have salty wet clothes stinging my skin :D
It was a fab camp spot & not long after setting up a group of sea kayakers turn up, it was the same group we saw earlier & I was surprise to see Andy Stamp with them. I know Andy from my own 5 star training up on Skye & a bloody good teacher he is too.
Later that night our crazy friend (Martyn) from Sheffield agrees to drive down that night & join us on the water tomorrow. Thats a 300'ish mile trip for a day paddle, pretty hardcore!
Lets hope its a good day :)