After a very welcome & heavy sleep we woke to yet another gorgeous day if a little breezy.
My arm pits had scabbed up a bit overnight & part of my t shirt had stuck to the scabs, a quick tug & intake of breath sorted that out.

Martyn said he would arrive about midnight & sleep in his car so Stuart grabs his camera to capture the 'shakey wakey', unfortunately Martyn was aware of our Mischievousness & foiled our plan by getting up earlier :( 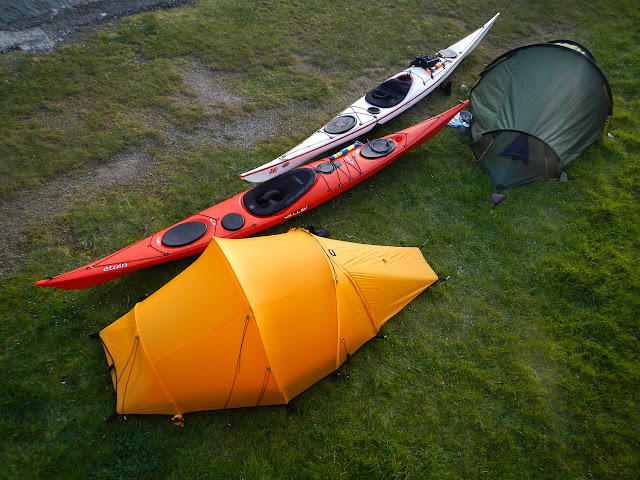 We took a walk up to the top off the cliff to check out the conditions, it was quite choppy with decent swells & low visibility. we couldn't evan see the other side of St Brides Bay & we were due to paddle the 9 miles straight across to Martins Haven. We also had some concern of the conditions around Skomer, Skokholm & St Annes Head in the stiff South Easterly breeze so we decided after much debate to paddle somewhere else. 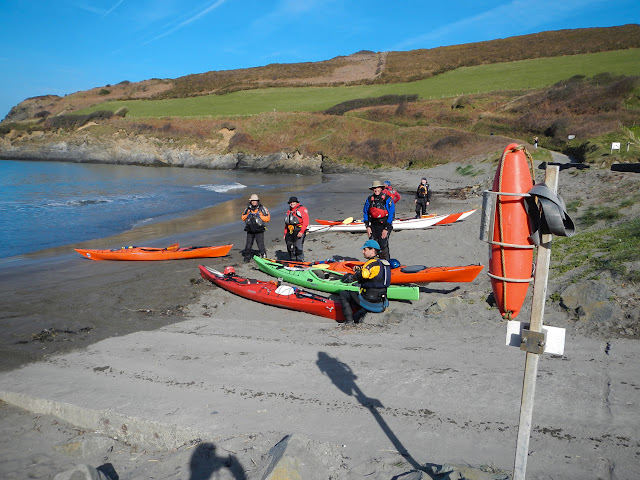 We chose to accept the offer of a lift from Martyn & head to Pwyllgwaelod to explore the North coast a bit more, virgin territory for Martyn & we were mostly in the lee of the wind up here. We spotted Mike Mayberrys van outside a cafe in Fishguard on the way & popped in to interrupt his coaching speech no doubt & say hi. My mate Gareth was one of his students today & doing his three star which I glad to say he passed.

We bumped into the guys on the beach too, Mikes group would be going West & me Stuart & Martin were to explore East of Dinas Head. It was turning out to be a scorcher today so I left the cag off & paddled in my rash vest hoping that if I stayed dry my arms would be ok? 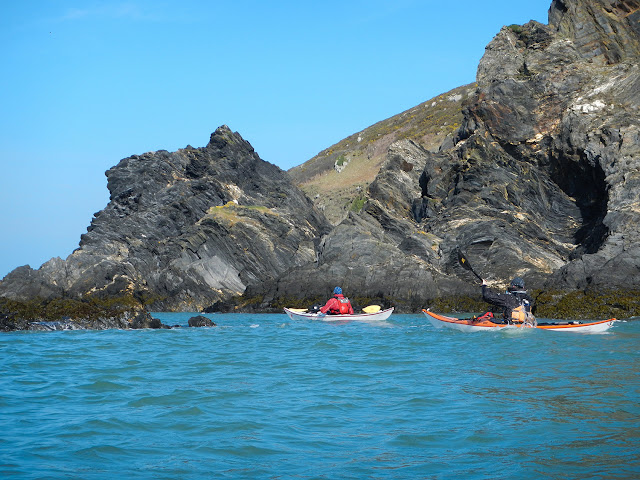 Paddling out around Dinas Head we pass some of the very best coastal scenery in the UK. 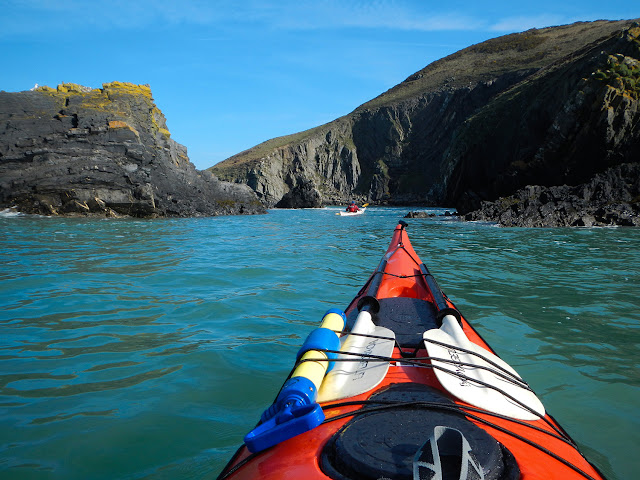 With dramatic cliffs, rocks & caves to explore & all with the sun beating down :) 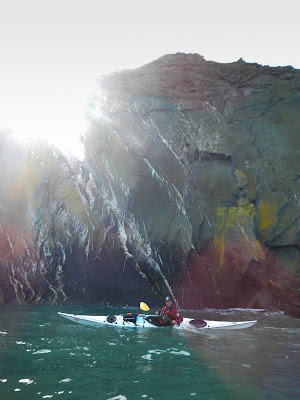 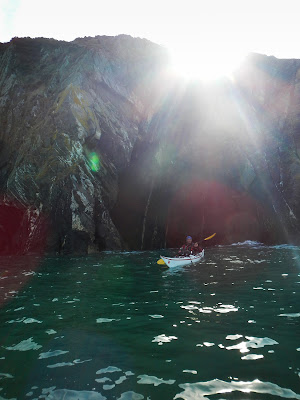 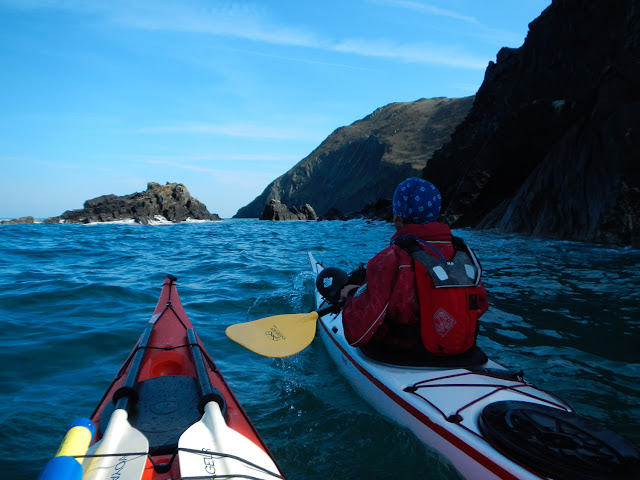 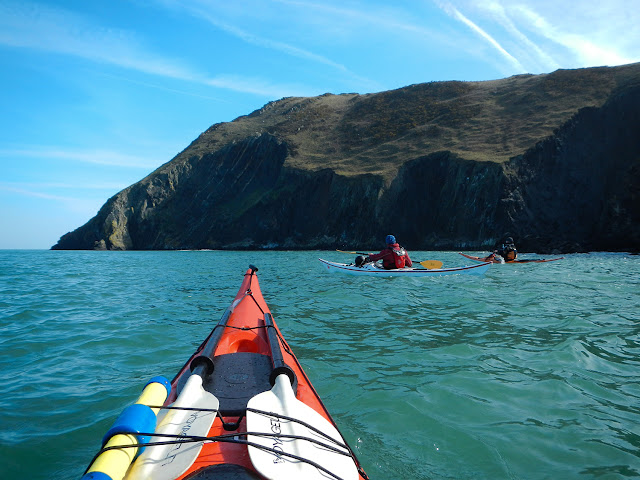 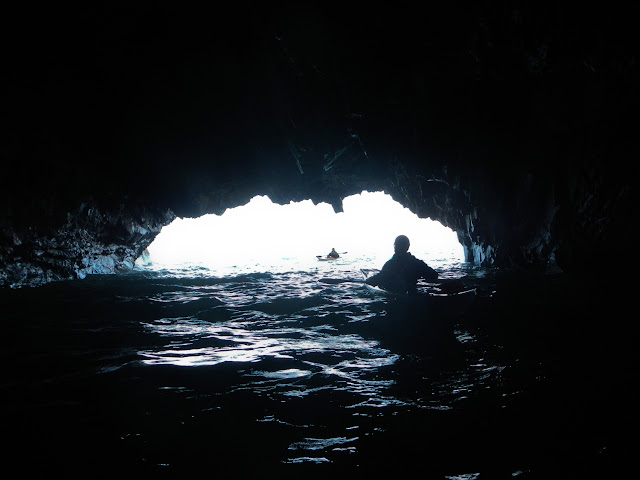 Stuart heads off into a cave on dinas Head, a pretty impressive one with a low roof. Lets hope a big swell doesn't run in :D 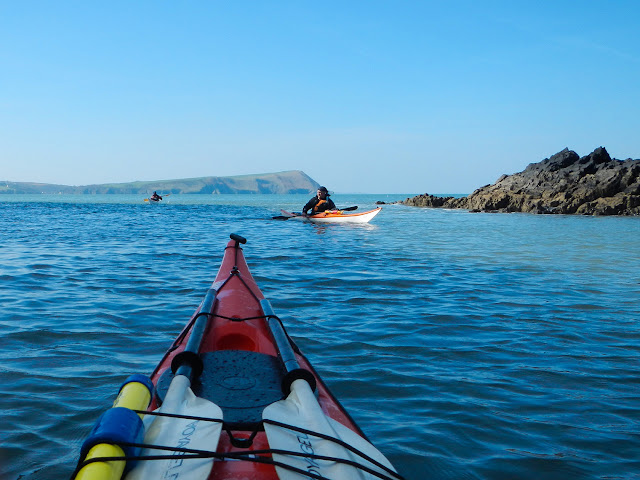 We all wanted to find the Witches Cauldron so we head across to the other side of Newport Bay, a two mile crossing into a stiff wind slightly to our right. 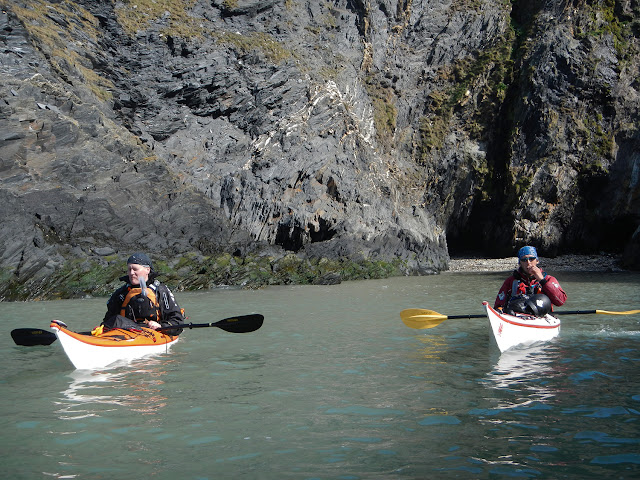 Caught them stuffing their faces :) 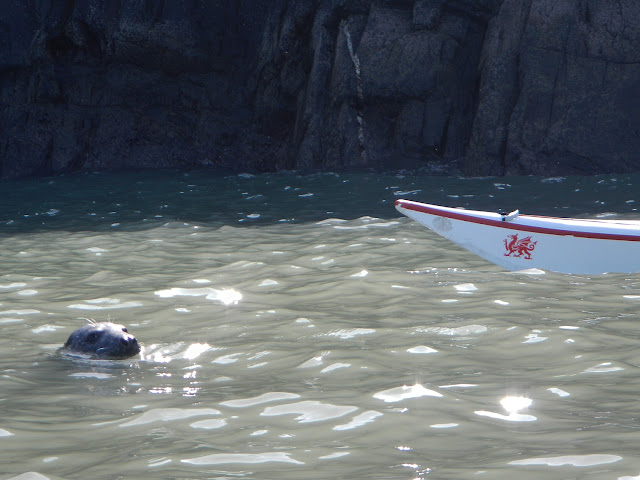 Just around the corner we meet some locals. 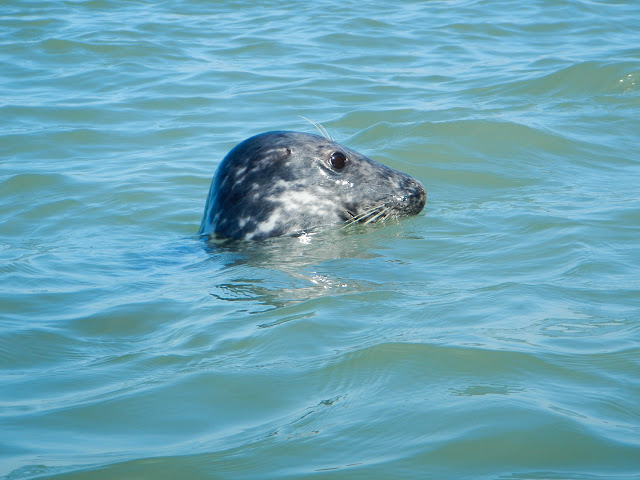 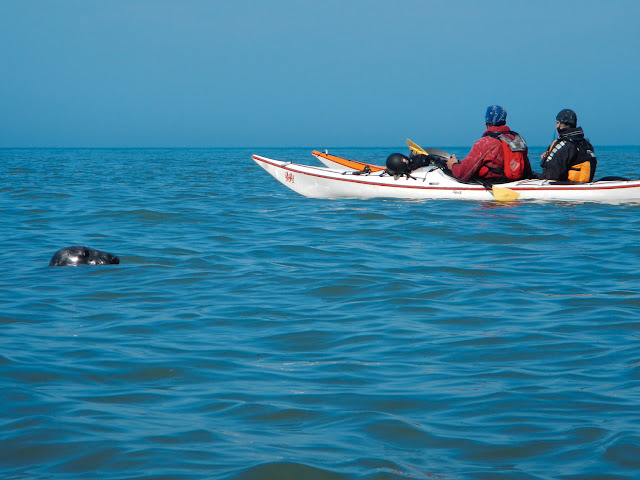 Stuart & Martyn unaware they were being watched. 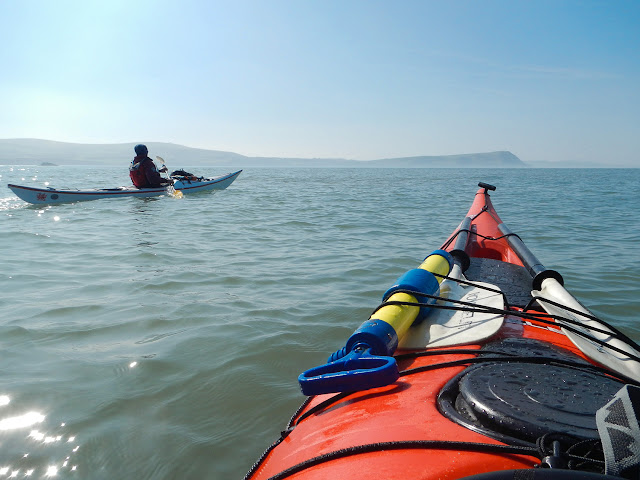 Not finding the cauldron we head back felling pretty smug with the fab paddle we've had. We later found out that if we'd carried on just a mile more we would of found it. Can't say I'm bothered, just another reason to go back.

I learnt whilst rock hopping on the way back that you can get stoppers on the sea too. I paddled through a gap just as swell ran through. The water flowed over & down a slanting rock just like a manmade weir leaving me pinned in the stopper as the water soaked me. When it let go I then got pushed over to rocks but managed to get my head down & make a hasty retreat grinning at my close call.
Now with a wet rash vest my armpits were really stinging again so I paddled back topless in the wonderful sunshine.
I guess rolling practice was cancelled :)

I had a great weekend & it was fab to see so many familiar faces so far out West.
Posted by Taran Tyla at 08:49