Poppit Sands To Cwmtydu...
Woke to a cracking day & got up early'ish to head into St Dogmaels for my supplies. Its a nice walk but I was keen to get on the water & kept a good pace.
Finally headed off at 10:30 & all looked good early on, a little bumpy on the headlands but just enough to be fun.
Leaving the headland from Dera it looked a little bumpy & I decided not to cut straight across to Ynys Lochtyn. Glad I didn't as it got a bit rough as I approached Traeth Penbryn. I pulled in to check the map I purchased at St Dogmaels & decided wether or not to continue.
I decided to carry on & set off again. In the time that I took to decide & Eat a snickers it had got evan worse with lots of whitecaps & much bumpyness.
I cautiously turned around & headed back to the beach to sit it out & hope it improves.
A couple of hours later & with a better tanned arse than earlier, (LOL) I set off again. Conditions were much better but it was bumpy around Ynys Lochtyn though I expected this as its a bit headland.
The rest of the paddle to Cwmtydu was uneventful & very beautiful. Sheer cliffs rose high & prevented escape from the sea. This was a place for the sea birds & I'm privileged to have got a glimpse into it...
GEEK STATS...
Trip Odom 14.1 Nautical Miles, (16.2 Statute)
Max Speed 5.8 Knots
Average Speed 3.6 Knots
Time Moving 03:54:38 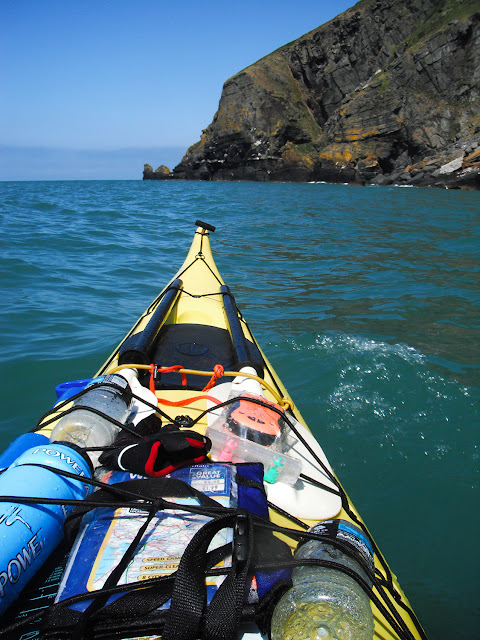