PwllGwaelod to Ceibwr Bay...
Another terrible forecast, F5-F6, again from the South West & again I decide to give it a go.
I set off at 08:30AM & was going well, I evan headland hopped straight past Newport Bay. After that the situation went downhill rapidly with the high wind creating messy sea's.
Nearing Ceibwr I spotted what I'm sure was a Basking Shark. I didn't see both fins as you usually do with a Basking Shark but it stayed on the surface moving slowly. I wasn't stopping for a closer look however as the sea was quite rough & holding my concentration.
The cliffs are shear on this part of the coast & the only exit point between Newport sands & Poppit in Cardigan is Ceibwr Bay. I had no idea how far Poppit was as I don't have a map of this area so with the sea getting rougher I decide to pull in & make camp at Ceibwr Bay.
The rain is now pounding down as I write this & I'm sat in a lime kiln next to my tent. I've made a makeshift seat from some rocks & the view from the kiln is much better than being sealed in my tent.
Should keep the cabin fever away...
GEEK STATS...
Trip Odom 7.62 Nautical Miles, (8.7 Statute)
Max Speed 6.2 knots
Average Speed 3.8 Knots
Time Moving 01:59:26 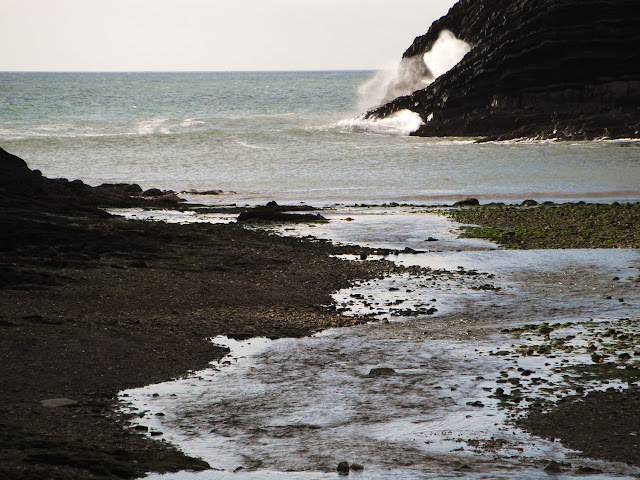