Today I met up with Noel & Stuart at Aberthaw with the intention of paddling to Lavernock & back. There was no chance!
It was forecast F5-7, sea state 5 & for once it actually was. Evan more when the squalls hit.
We decided to head to Barry Harbor for a paddle instead, not without teasing Noel first. He pulled up, looked at the sea conditions & I strolled over & asked if he's ready to go (LOL). Naughty Taran ;D 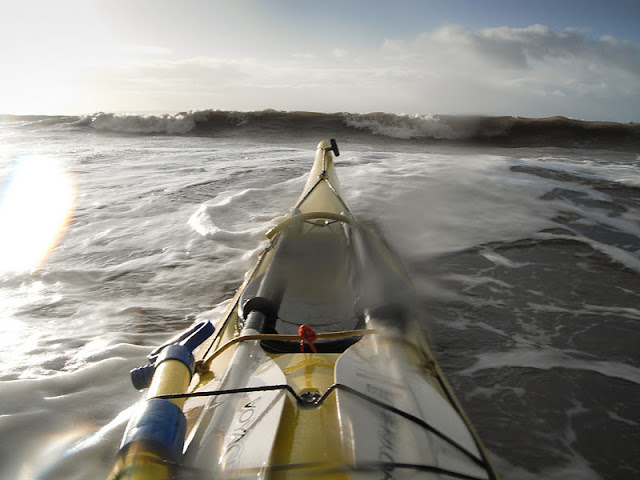 This is more like it. There's fab swells running into the harbor & I think we all caught some fab waves.
I was chatting to Stu at one point when he said look out? there was a huge wave bearing down on me, I didn't have to paddle onto it, it just picked me up & surfed me to shore :D
Noel caught a fab wave too & I wish I'd got a picture but he finished by bongo sliding straight towards me, had to paddle hard to get out of the way. 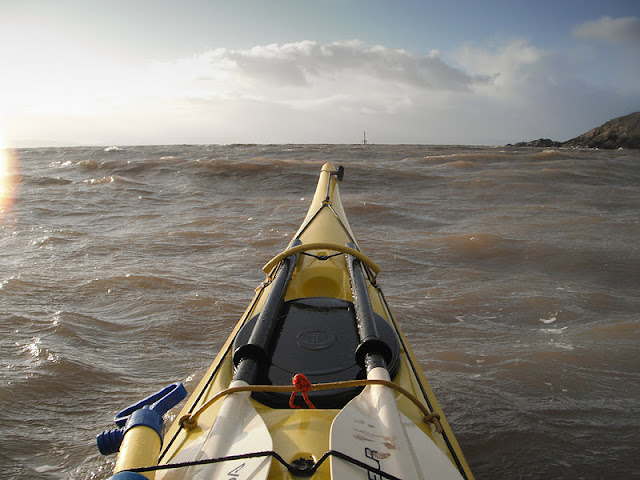 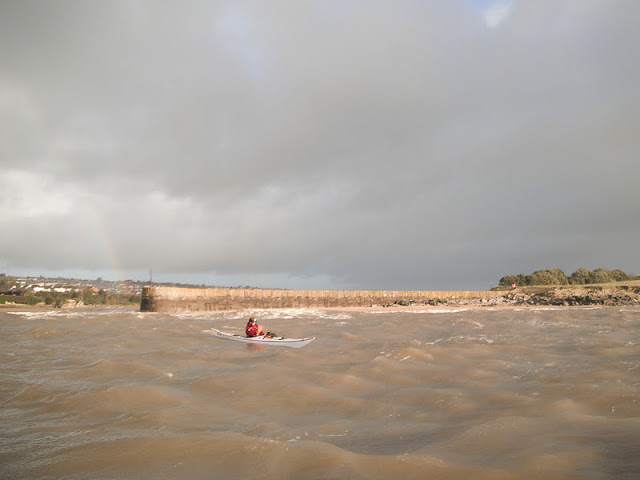 We played in the swells heading in & out on the surf. 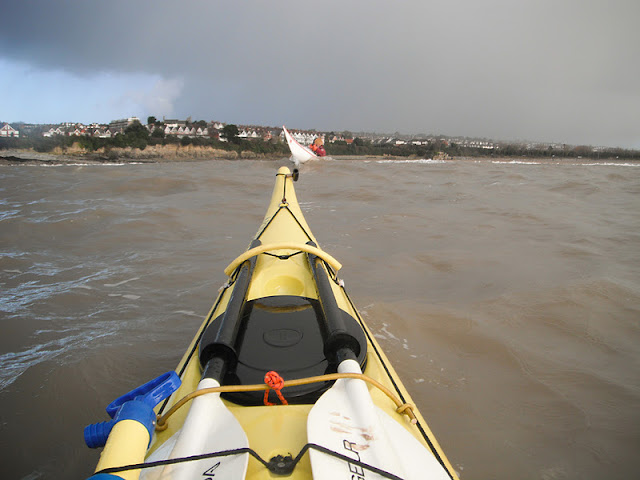 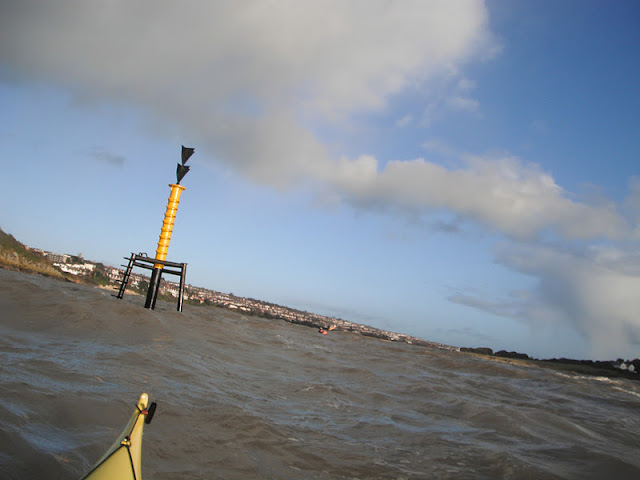 Playing around the cardinal marker. 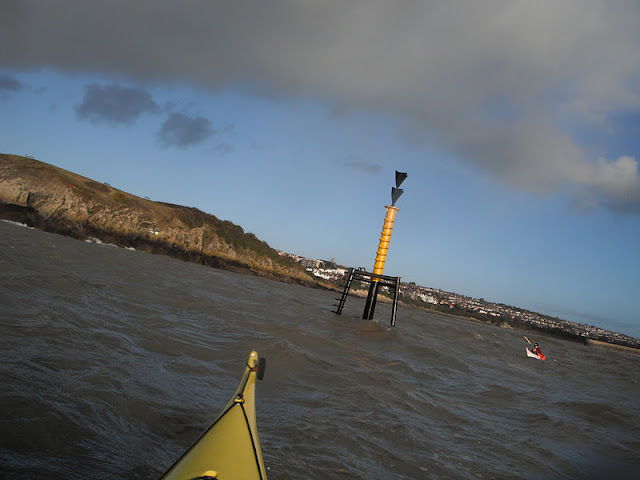 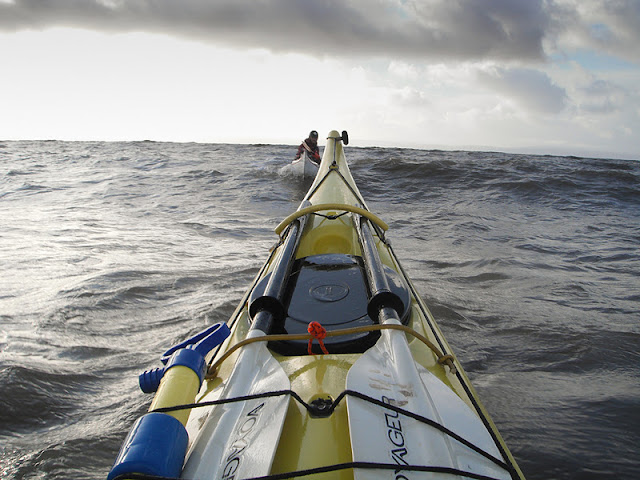 And trying to surf into each other? 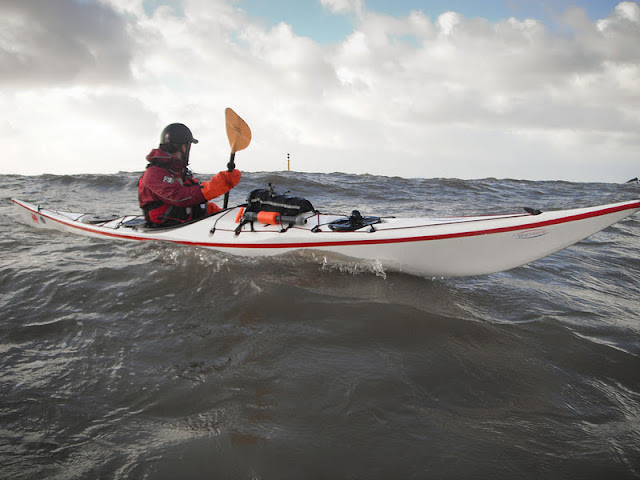 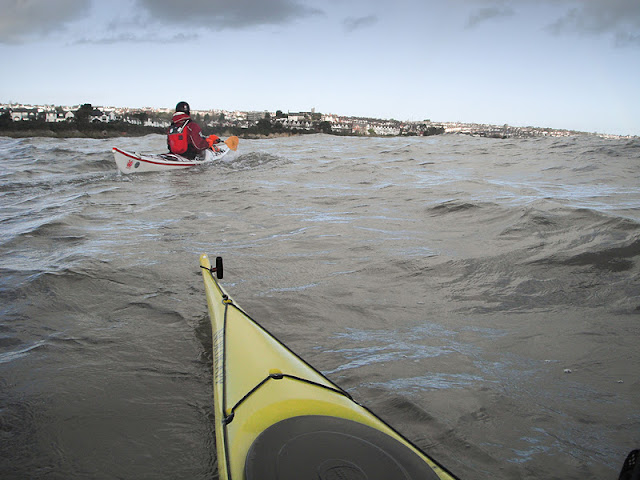 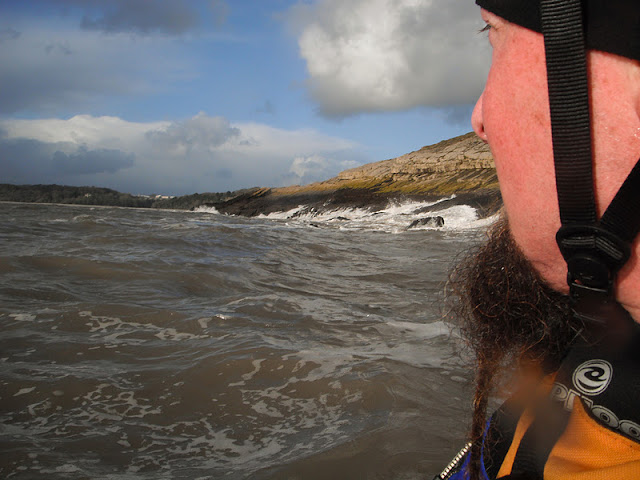 A moment of calm. The whole morning came in phases of rough & calmness. 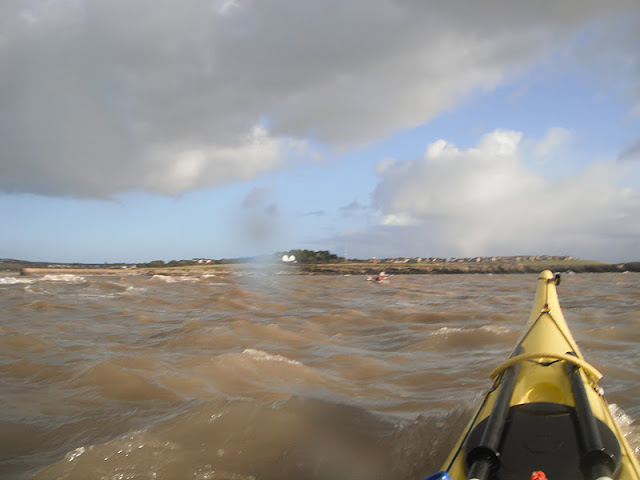 Doesn't look like it here but there was some huge waves pushing between the cardinal mark & the headland & was definitely the best spot for surfing.
I caught on wave & surfed left heading toward the headland like a rocket, wasn't sure I'd stop in time? Then the next wave hit turning everything white & foamy, brilliant! Really pissed a fisherman off too, always a bonus :D 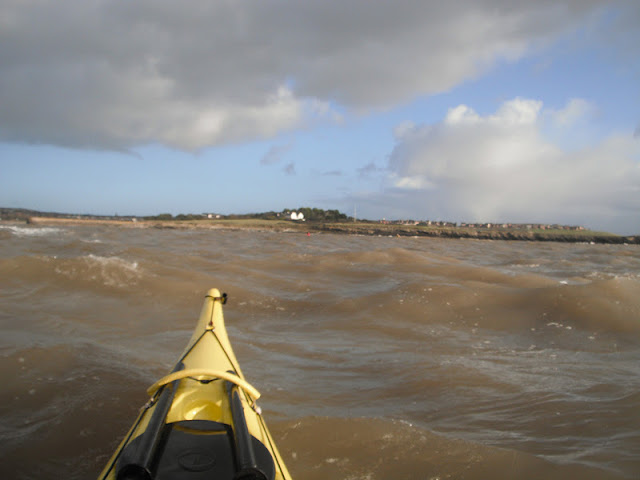 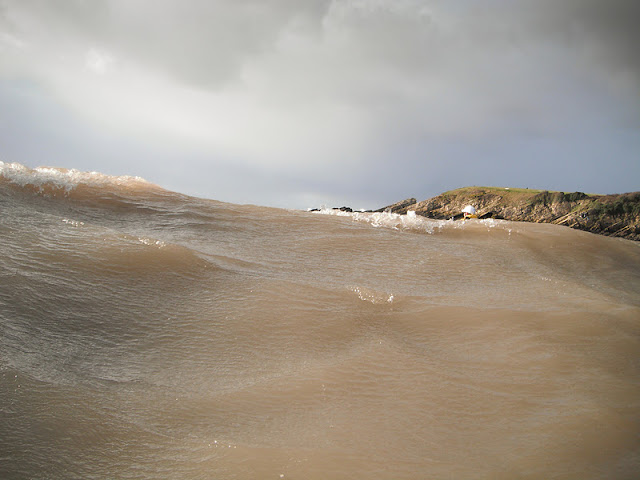 We coax Noel further out for a play, you can just make out his head. 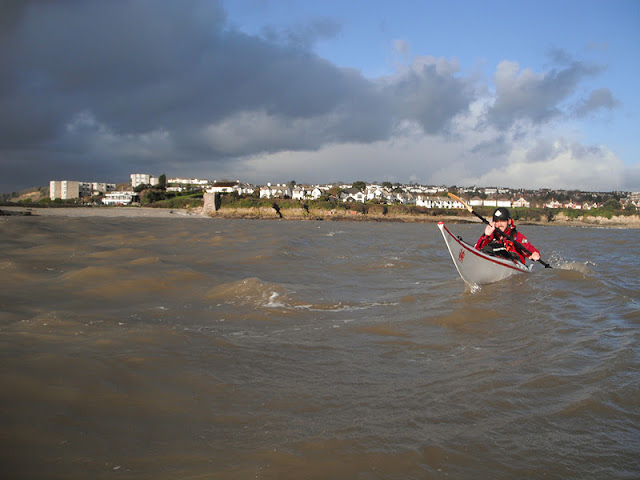 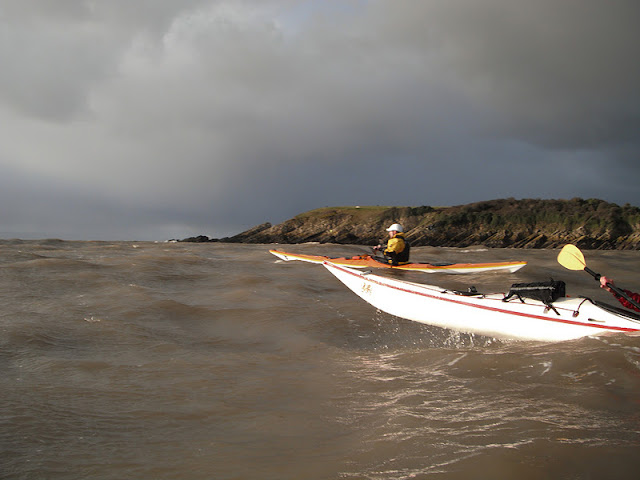 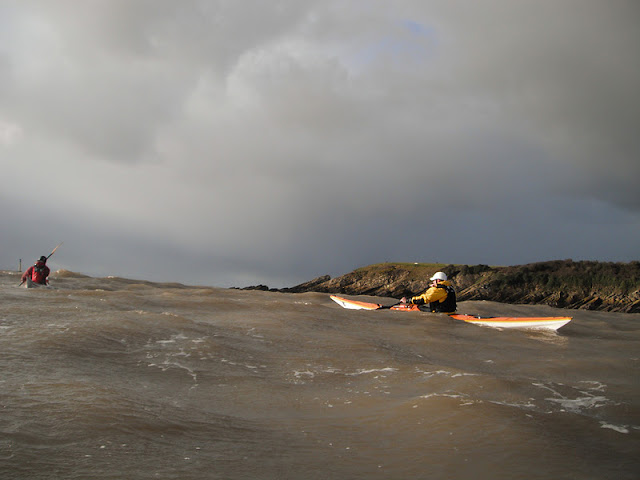 It was just after this I did a couple of rolls, very bad idea! serious ice cream head! 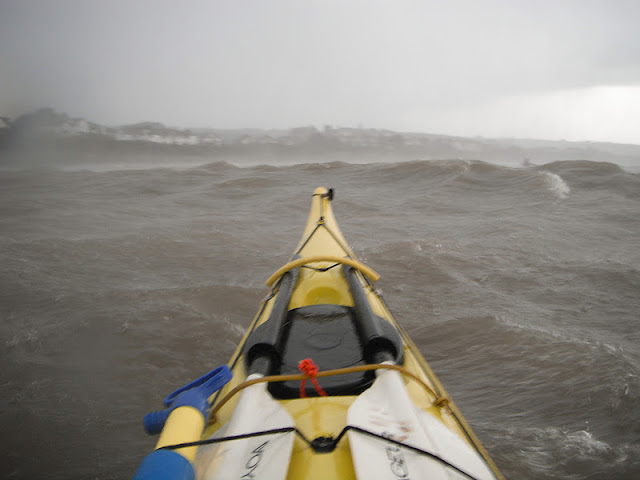 I paddled out further back to the headland where the biggest swells were coming in, seemingly ignorant of the very strong wind, unaware in my excited anticipation that a squall was about to hit. I surfed a couple of big swells & then everything went nuts. I was pointing my head down to keep the hailstones out of my eyes & trying not to get blown over or capsize on the suddenly very choppy water.
I head further in to see how Stuart & Noel are? Noel had legged it, (or armed it? LOL) back to shore against the wind & Stuart was in the middle of the Bay unable to turn around. We sit it out for a bit but it was getting worse & we were being blown towards shore so I suggested we surf in. 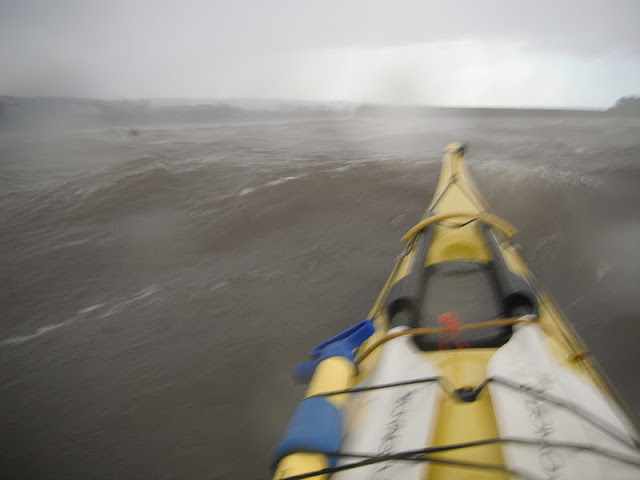 Gotta make it to the breakwater in the distance. 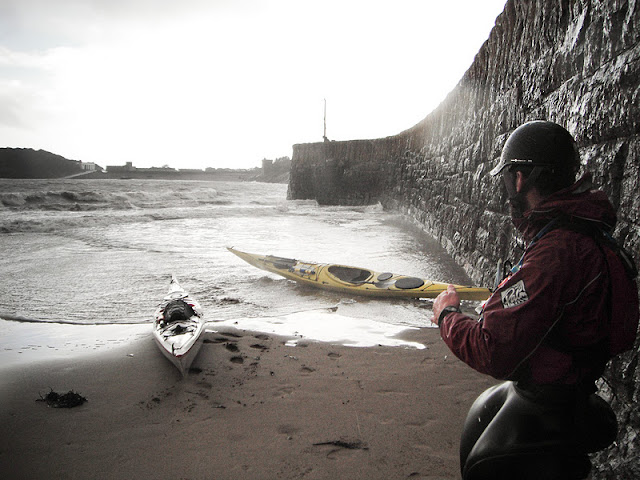 Bloody frozen & very amused we make it to this strip of sand. The beach we should be on is by the buildings in the distance :D
After it calmed down we paddled back over to Noel Where Stuart stayed, I wasn't done yet & wanted some more playtime so I head back out to the cardinal marker. 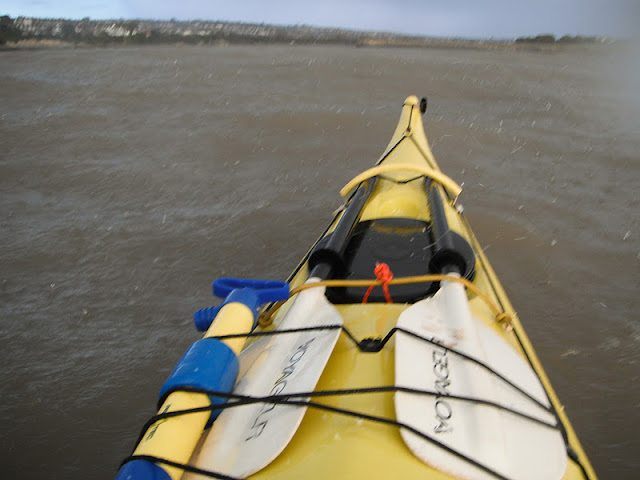 Caught a few more swells & then down came the hail again, without the high winds this time. 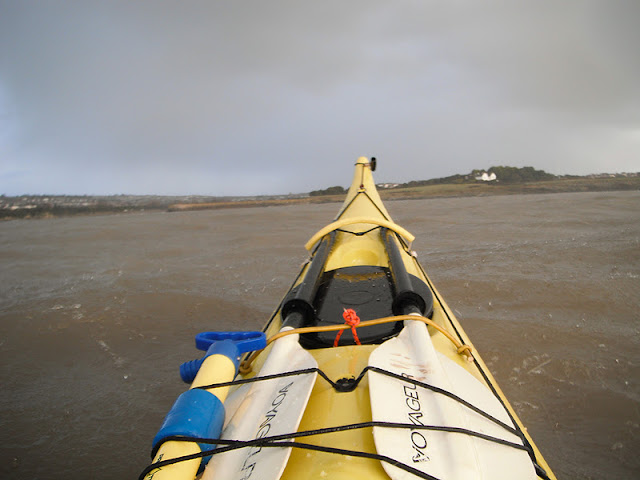 A bloody awesome paddle, it may of hurt at times & was very cold but things like that make the memories more special ;D
Posted by Taran Tyla at 16:34