Quite Simply the best day's paddling I've ever had & I've had some pretty awesome paddles over the years.
This trip had everything, stunning scenery, amazing rockhopping, terrifying tide races & huge spring tides. What more could you want?

I was paddling with Jen's again today on his last day before heading back to greenland. 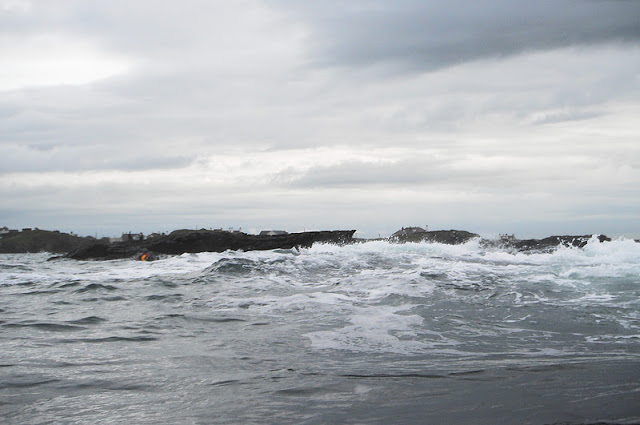 The plan was to paddle from Trearddur Bay to South Stack & go Surfing on the standing waves there.
We did a spot of rockhopping on the way out of Trearddur Bay, you can just make out Jen's in the picture. Oooer, Penrhyn Mawr, though its not meant to run on the Ebb. 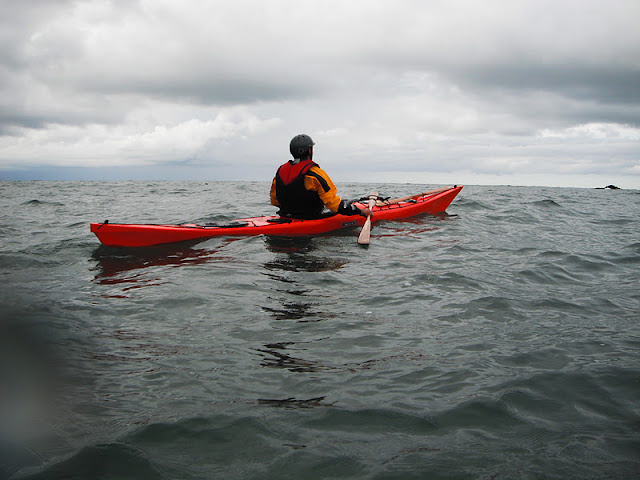 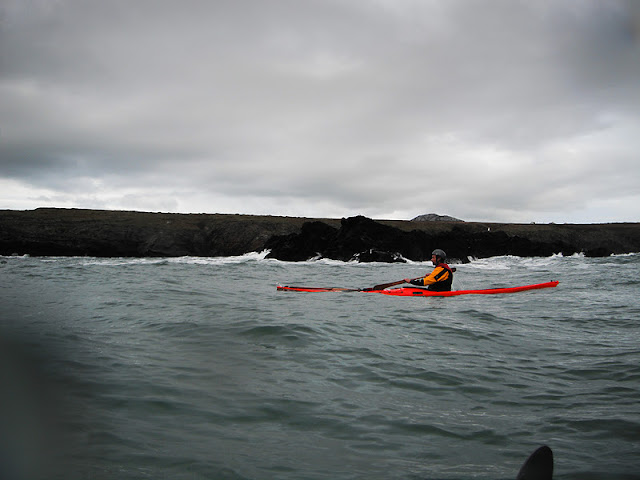 Jen's on the outside of the middle rock. 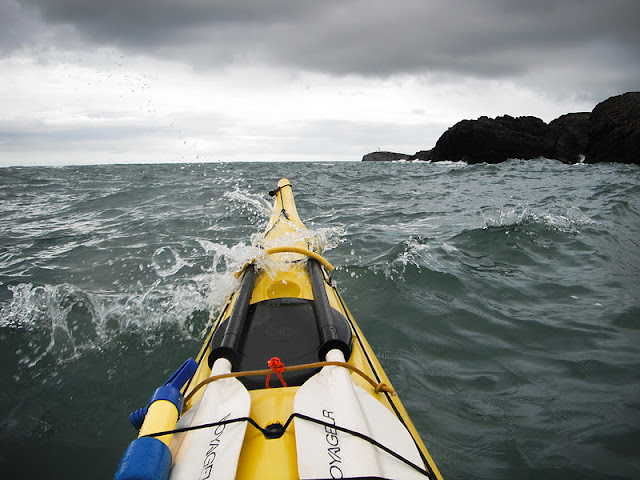 We spot some waves moving a little further out & head for them & admiring the view of South stack in the distance. 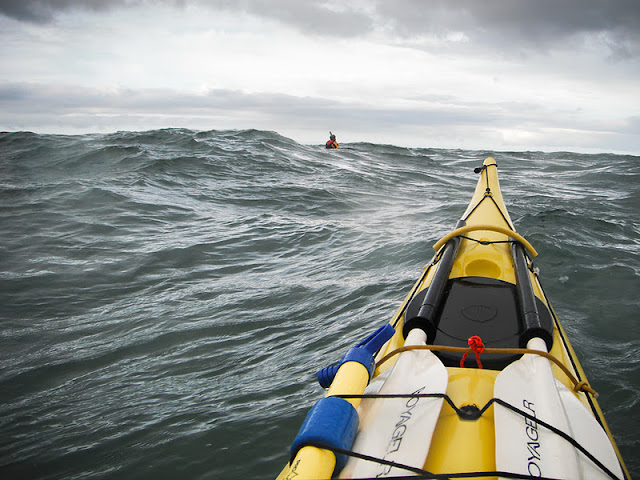 There was waves at Penrhyn Mawr, not huge & pretty messy & confused. This was the only shot I risked taking & doesn't really show the fun we had. 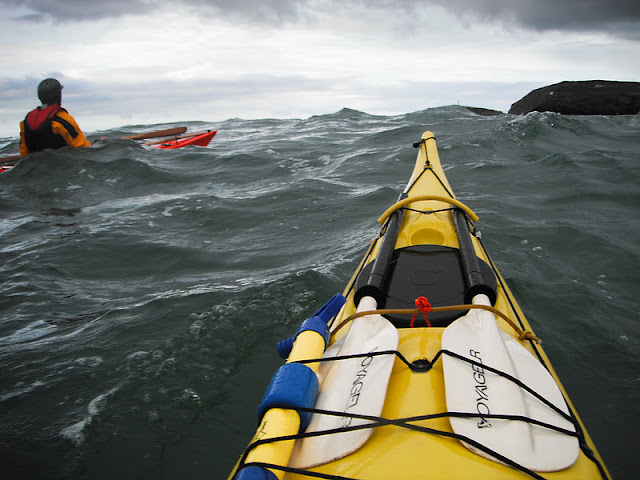 We carry on to South Stack. 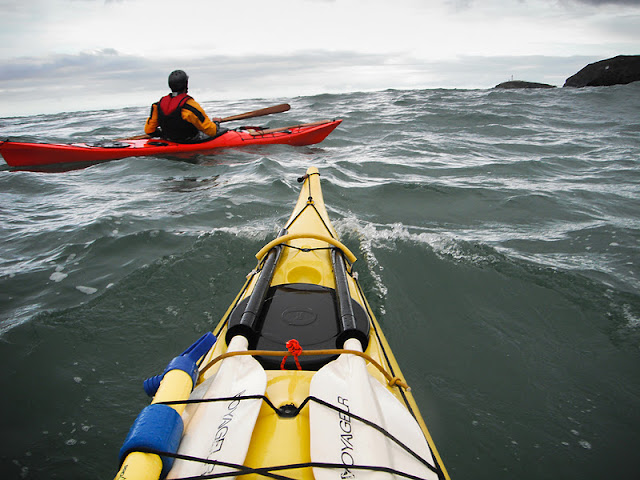 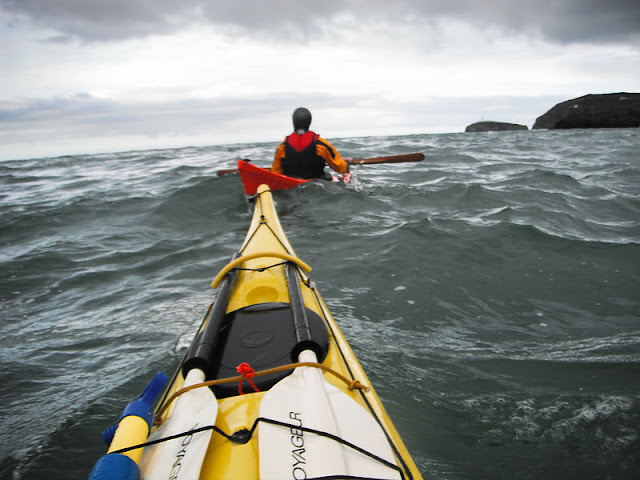 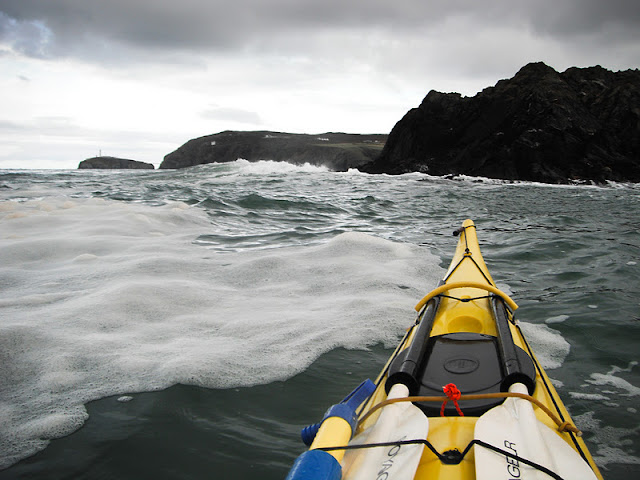 And hit a little problem, the tide was ripping around this headland & barring our passage to Abraham's Bosom. And I mean really ripping. Twice I tried heading straight into the flow about 10-15 metres from the shore, no chance. Then I change tact & hug dangerously close to the rocks with the swells breaking in, nearly made it this time but nearly took a beating on the rocks & lost my nerve.
I hate giving up so I paddled well out from shore & pushed against the ebbing tide. I was working hard, hard enough for sweat to be running down my face. It worked & I'd made it across (Phew).
Jen's still back in the other bay was holding his paddle in the air, he later told me it was to show me where he was though most paddlers know it as the 'come to me' signal. You got no chance (LOL). I hold my paddle aloft to encourage him along & he seemed to have an easier time of it than me??? 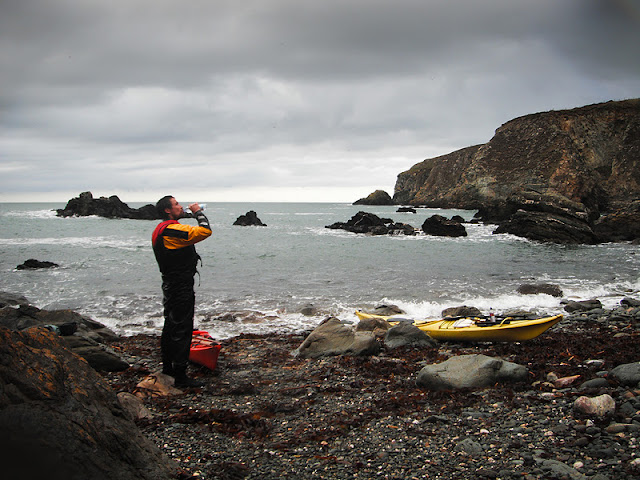 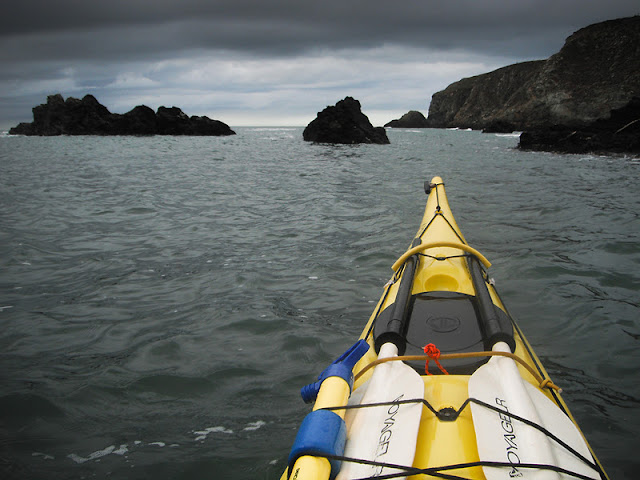 I just love this place, beautiful! 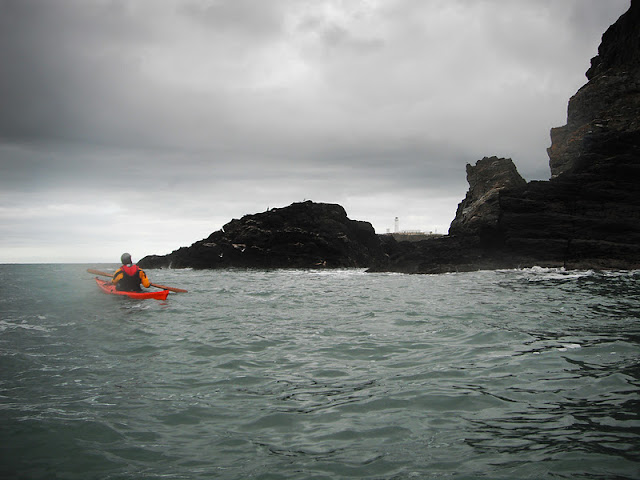 Approaching closer to South Stack & getting nervous about the waves we're gonna encounter. 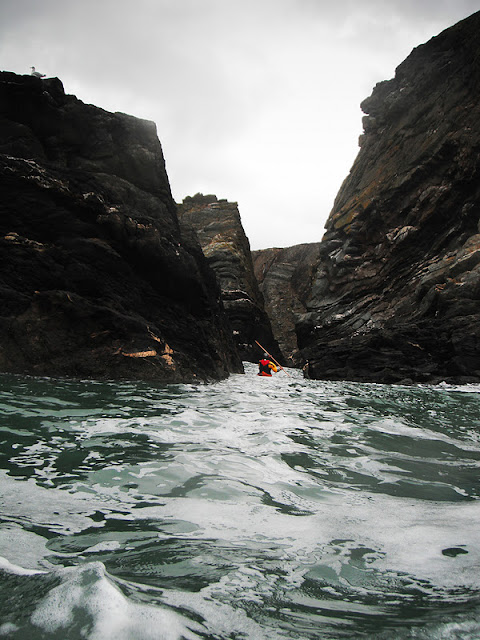 Not before a spot more rockhopping, this place is utterly fantastic with caves, rocks & gullies all over the place. 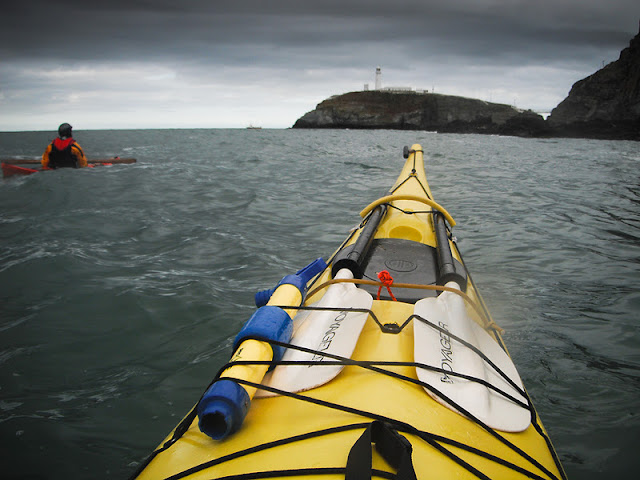 This shot taken just before pushing against the ebbing tide between the Island & main land. I recognized it from the rough water handling DVD I got & enjoyed practicing the techniques they displayed there. 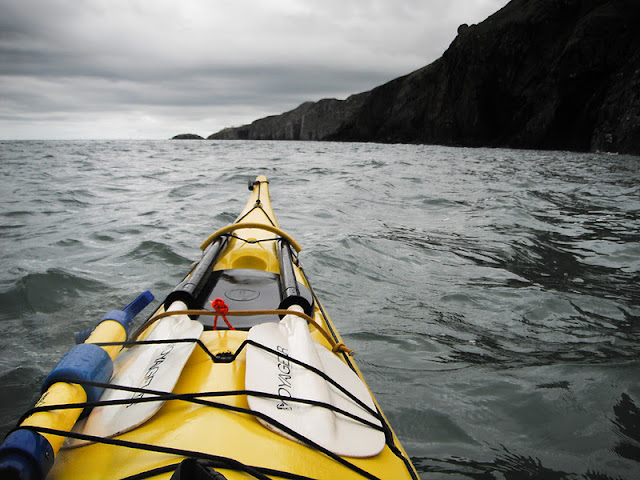 Debating whether to paddle to North Stack or be brave & head out into the standing waves on the race?
It was a big spring tide & was at 100% flow when we got there, the waves looked huge. 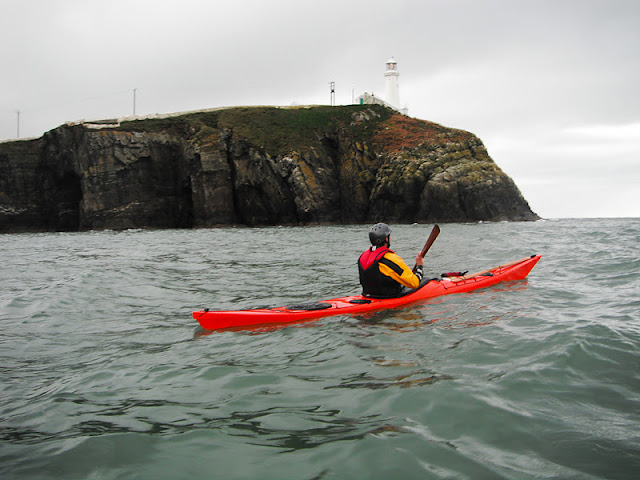 We decided to be brave, though unfortunately there was not a chance in hell I was taking any pictures out there! 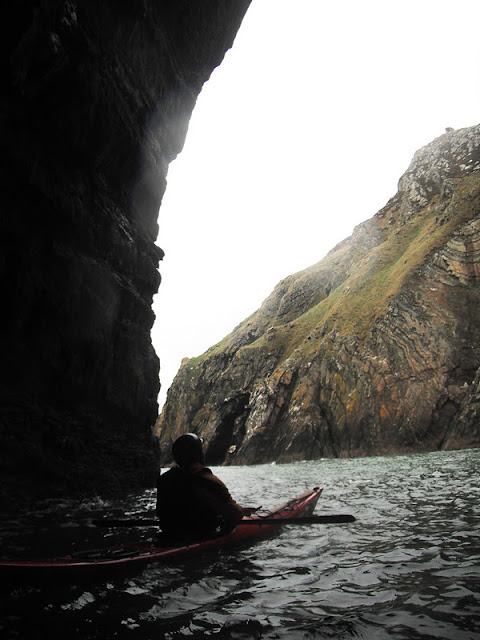 We played for a while on the waves then made our way back around the island & though the gully between the Island & mainland for another go.
We had a look at this cave on the Island first, composing ourselves I think. 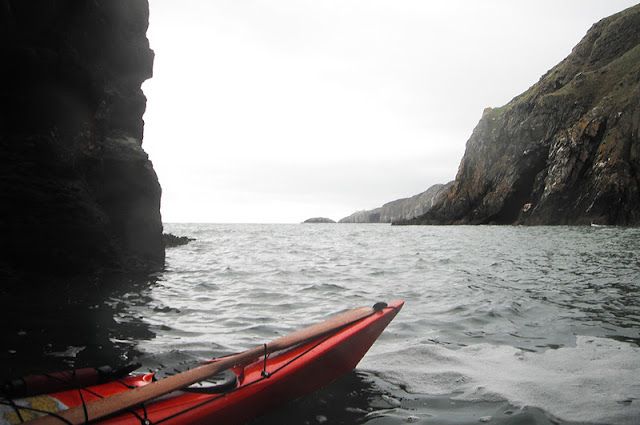 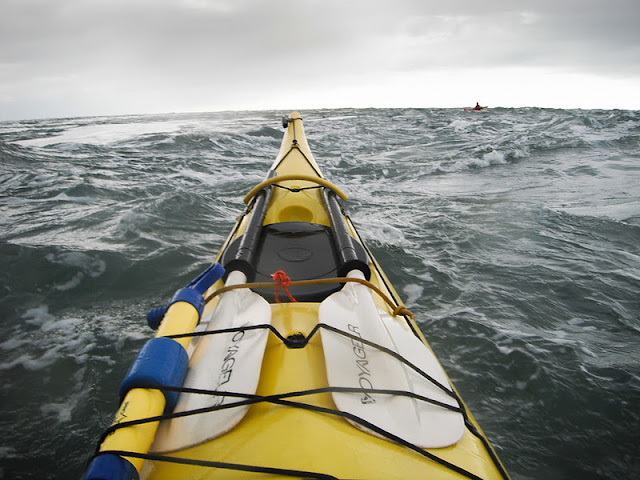 Again no chance of taking pictures but I did take a couple in the relatively calm waters off the end of the Island as the tide squeezed around it. 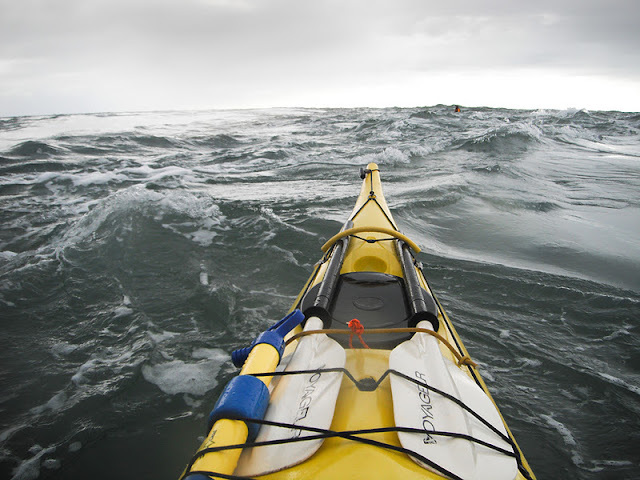 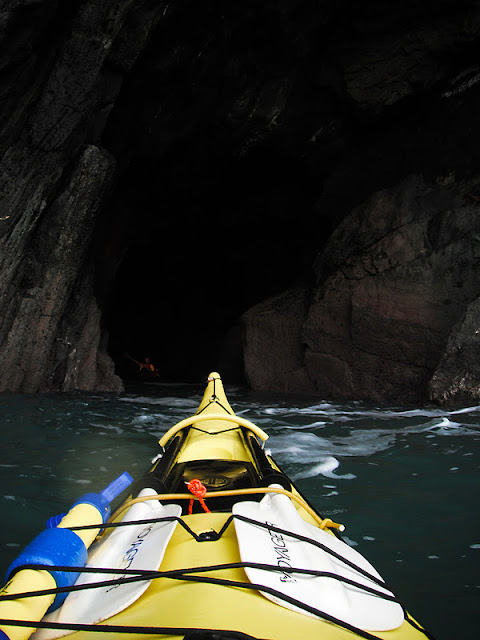 Our adrenaline rush fulfilled we head back & take our time with plenty of rockhopping. This cave turned to the left further in & sounded like it went deeper than our eyes could see. 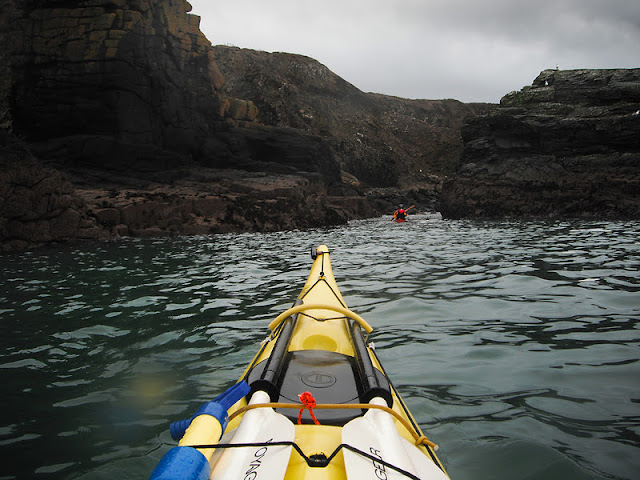 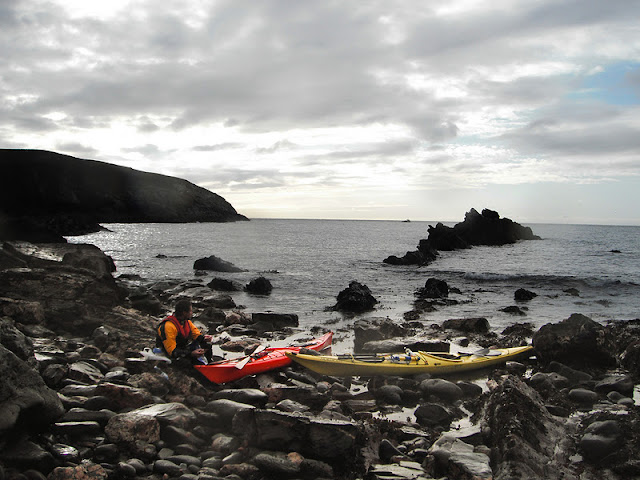 Time to get more fluids & fuel in our aching bodies. Nice spot too. 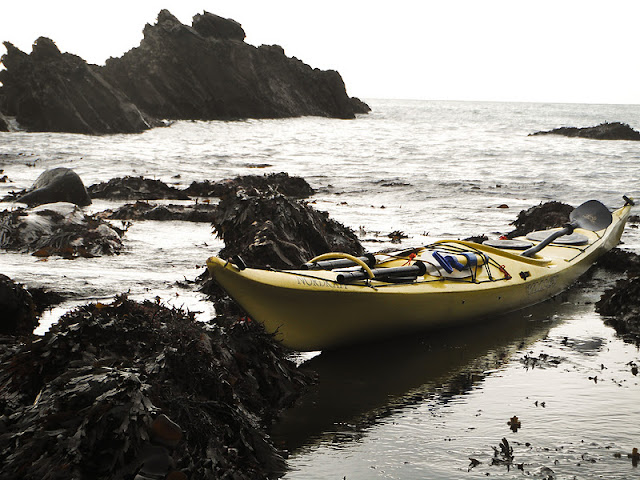 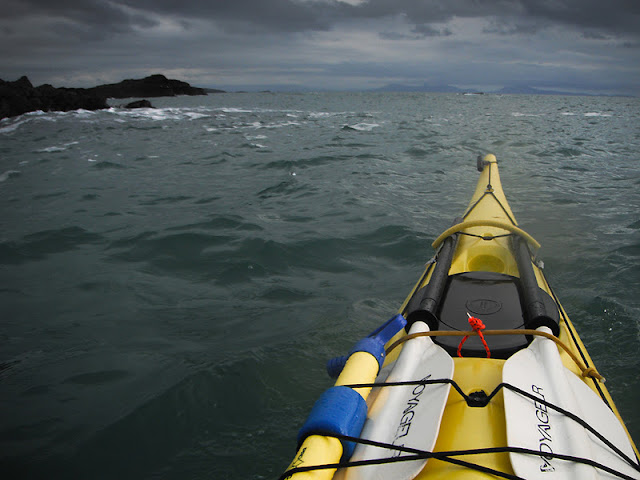 More stunning scenery looking towards a dormant Penrhyn Mawr with the Lleyn Peninsular as a backdrop.

Cant believe what an awesome day that was !!!
Posted by Taran Tyla at 10:11